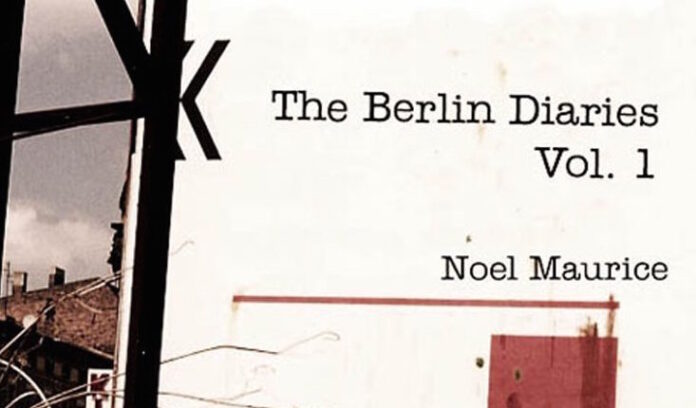 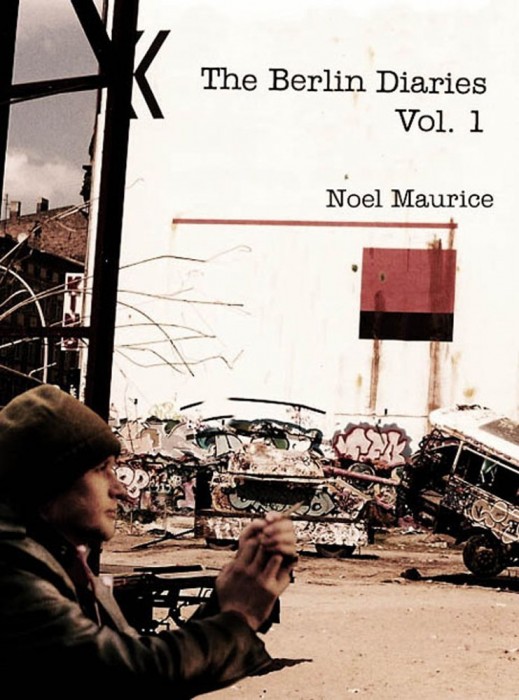 The Berlin Diaries by Noel Maurice

A couple of weeks ago our own John Robb interviewed Noel Maurice at the launch for his book “The Berlin Diaries”, which in short is “a muso’s memoir of his time squatting in East Berlin in the 1990s in the arts squats, busking and playing guitar.” Polly Trope was also there and here she reviews said book for us.

The Berlin Diaries is one guitar playing dreamer’s account of life in the squats of East Berlin, shortly after the Berlin wall comes down. Part one of a trilogy, the first book retells the year 1991 like a rocky legend of new beginnings out of old rubble.

“The fog that hangs among the eaves of the buildings gives the place an air of Victorian London – I will later find out that the fog is because in East Berlin people still use coal ovens for heat, and since it’s still winter when I arrive, the city is always hung with smog, as well as that peculiarly ancient smell of burnt coal”, he writes in the first few pages. It takes us back to the early 1990s and the darkened, chipped and glamour-less streets of East Berlin just after the city wall was torn down. Irreversible changes in the system were working their strange, and not always enchanting, magic. Hope mixes with destruction, anticipation with depression.

Maurice’s scene-setting raises in front of us the old brokenness of this semi-derelict Berlin (by now so cheerfully reconstructed) and the place described here is both a historical reality, and a gigantic mirror of the hero’s souls, of his and his friends’ own feelings. One by one, we get to know a whole little tribe of squatters as Noel spins out adventures with them in the all-new, all-old Berlin.

Life is practically free. Little secret parties linger and spark up behind every turning. The story is full of good-looking young people, parties with friends, drugs, and steamy love scenes. Noel gets into busking with his guitar, he also starts a band. But… Where are they?

We can’t help but notice that apparently, a lot of East German citizens just picked up sticks and left when the wall came down, to move to any other town – as long as it wasn’t this one. They left behind their shells, within a shell – remnants of people’s private lives, in the remains of a vanished country, the crumbled GDR and Soviet Union. Noel and two friends open up an abandoned apartment, and thus he gets his very own room in Berlin. They gather furniture, bedding, kitchenware, everything down to clothes and toothpaste, by combing through a few nearby abandoned blocks of flats, picking out what they can use. Whole lives, complete with rusty tea strainers and faded lampshades that have been left behind by other people, begin to form a fleeting image of the recent past. This sheds a strange shadow over the whole story of the new found paradise.

What made all these other people leave? Will Noel really find happiness here? What would the old tenants think, if they saw Noel and his friends doing all this? But Noel cuts short this reflection, he wants to streamline himself with the Berliner motto : “The past is not wanted”.

The cuts run deep. Noel has a one-night stand after getting drunk somewhere with a local woman. But in the morning, he learns that she is married with kids, that this night was her birthday. What led her to spend her birthday this way? She only got married and had kids because she thought she would be forced to live in that system for the rest of her life, she explains. But now that everything is new, she can finally admit to herself and others that she never really liked it and wouldn’t have done it given a choice. As a reader, one senses that woman’s private tragedy unfurl on the margin of Noel’s day-to-day, just as it fades out and takes its place within the threadbare tapestries of the story’s backdrop.

This is a memoir of a time and a place that has been and gone. It offers up a whole world to get sucked into, like a mesmerising movie, so surreal, gripping and so shattering. It’s a fast-paced story that reads like a fiction  – although it’s not – and messes with the boundaries between life and art. It’s a big shame that books like this one fall through the cracks of the mainstream book industry, but you know all about it now…

Visit Noel Maurice’s website: noelmaurice.com – On request, you can get the first chapters to your inbox for free, and you can also buy a copy from here. Or get it on Amazon.

All words by Polly Trope. This is Polly’s first post for Louder Than War. Polly also contributes to IndieBerlin, a networking site dedicated to independent art, music, fashion and lifestyle in that city. Her archive there is here.