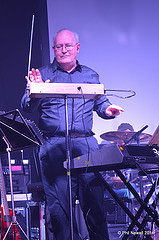 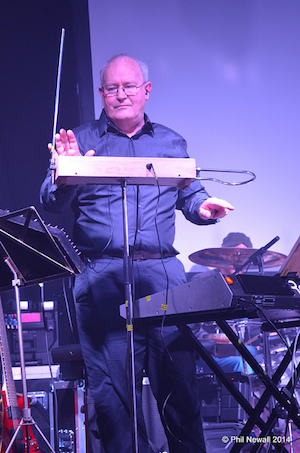 The final day of the Liverpool Sound City Festival; close to 360 artists, bands and performers have already appeared at in excess of 25 venues dotted around the city – this included some genuine musical luminaires, those who have shaped our listening patterns, even affected out understanding of music, names such as John Cale, and Thurston Moore spring to mind both of whom appeared at Sound City – hell, Thurston Moore even staffed a pop-up record shop at one point…however for myself the real gem, the highlight of the entire festival always promised to be a live performance from The Radiophonic Workshop.

I would argue that The Radiophonic Workshop are responsible for writing the single most important piece of electronic music ever performed; namely the ‘Doctor Who’ theme which was created in 1962; this piece of music was the very first introduction to an unsuspecting public of the existence of electronic music…if you play the original now it continues to excite, it sounds as if it was recorded only yesterday – the lineage from this to 2014 and perhaps Factory Floor is clear to see; the likes of Neu!, Can, Kraftwerk, Throbbing Gristle, SPK, Pink Floyd, Gary Numan and others clearly absorbed the Doctor Who theme and awoke to the possibilities of electronic sound…

The Workshop was initially set up in the late 1950’s to satisfy the growing demand for what was termed “radiophonic” sounds – the sounds required for the atmosphere that BBC programme makers wished to include in their productions which were unavailable or non-existent through traditional sources…original members included Daphne Oram who would look to new techniques to produce effects and music for their compositions – these included ‘musique concrète’ and tape manipulation/cut-up methods. Dick Mills was the Workshop Technical Assistant who oversaw the early compositions used for sci-fi serial Quatermass, The Pit and comedy noises for The Goon Show.

Tonight’s performance is taking place in Nation, formally the home of super-club Cream; a venue, a label, and festival built upon electronic dance music; to this day thousands of hedonistic clubbers pack its laser lit spaces as internationally renowned uber-DJ’s manipulate the beats fuelling the euphoria of the heaving dance floor – tonight, with alarming juxtaposition 78yr old Dick Mills walks slowly but purposefully onto the same stage before positioning himself behind a keyboard and Theremin arrangement; to his left and at centre stage a large Tascam reel-to-reel tape machine, behind this and clearly visible the subtle glow of the Apple logo, an iMac positioned above an array of Roland keyboards; again it’s the collision of time and technology, then and now.

The remainder of The Radiophonic Workshop take to the stage, bar the drummer; a mere child in his mid-30’s, and the keyboard player – not even approaching his middle age…the band resemble a group of retired gentlemen about to begin a game of crown green bowls, that thought is obliterated as soon as they begin to play, the bass is delivered through the largest subs I have seen in many a year, you could park a Fiat 500 in the front box, the effect is instant, the entire building structure begins to vibrate, a rhythmic pounding building in your chest – the very effect Throbbing Gristle strived to achieve back in the late 70’s; the sound is clear and precise, layers of instrumentation and vocodered lead vocal, you hear the noises, you look at the stage – what you see messes with your mind; it’s like watching your senior school English teacher appear alongside Cabaret Voltaire as they hammer out ‘Nag Nag Nag’ 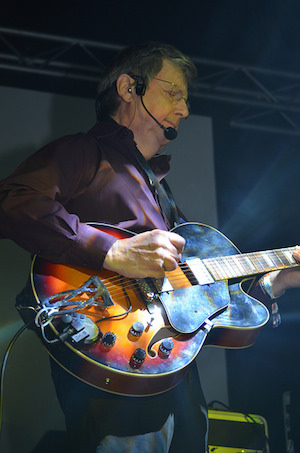 We are treated to a ‘best of’ the Workshops output over the years, during a passage from ‘The Hitch Hikers Guide To The Galaxy’ a video montage is projected onto a rear screen, the vocal samples of Ford Prefect and Zaphod Beeblebrox transport you backwards in time, clips from the much maligned ‘Blake’s 7’ flash before us; Mills is stood manipulating the Theremin, before pausing proceedings to instruct us in how it actually works…the set building all the while, we know what’s coming, the anticipation is palpable; I like to say the band are toying with us, but they just seem to genteel for such sullied behaviour, as such Mills pauses to introduce “another piece you might know” expanding by advising that the performance requires the simultaneous activation of both the Tascam and the iMac and then that instantly recognizable rhythmic bass line opens and underpins the theme throughout whilst the familiar rise and fall melody flows…

Music has the power to transport you to other worlds, in an instant I’m 6yrs of age back at my parent’s home, my younger sister and I sat in the lounge facing a 16” colour TV mounted in a wood veneered box the grainy picture flickers and that tune falls from the tiny mono speaker – back then despite the technological limitations the tune had the ability to both frighten, and to prepare the viewer for what was to come, fast forward some 40+ years and it retains that magical quality, the Workshop though are not content with merely replaying their most celebrated creation; instead we get a live manipulation, distortion nesting with the melodic fanfare of the opening bars, the bass line prominent throughout, if surges, it swells, vocal samples repeat the “Doctor” phrase, the backdrop cascading through all eleven Doctors – the effect is mesmerizing, these elderly gentlemen are creating a sonic mash-up that draws as equally from the 60’s as today – a clear unbroken line, the musical DNA from which the likes of Factory Floor and Baltic Fleet are constructed.

Sound City is essentially about new music, showcasing burgeoning talent and for that it is to be roundly applauded, however without a doubt, for me the highlight of the entire festival was witnessing a group of refined pensioners, albeit a group of pensioners who wrote the future many many years ago.