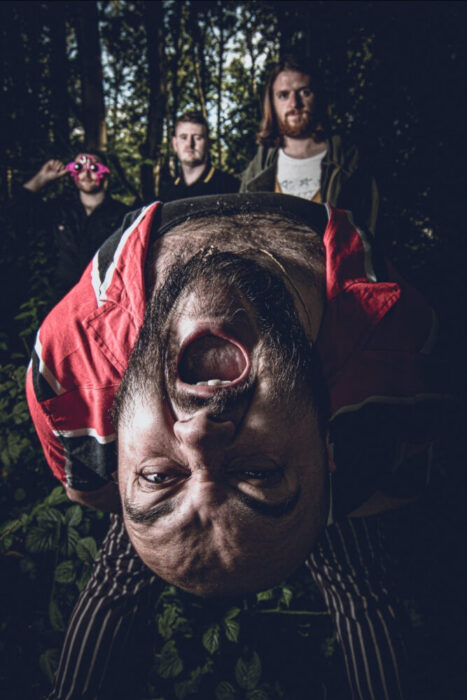 The Battery Farm have arrived to batter 2021 into submission with their unique brand of scuzz grunge punk I’ve decided to label ‘Prunge’. After witnessing some great bands over the last few years in the Manchester area including Cold Water Swimmers, Stepford Wives, Tinfoils and Horsemeat to name a few, the sheer unique punk as fuck rage of The Battery Farm are taking the reigns on that gallop out of this fucker of a virus through to the other side. Not giving a fuck about being cool of becoming your latest indie star, they come across to me like the spirit of the punk grunge underground of the early 90’s. Outsiders looking in yet thrilling the alternative throng with their explosive debut EP Endless Unstoppable Pain, with was easily one of the best debuts at the tail end of the dreaded 2020. Ones to watch that will blow you away meant I had to chat with Ben Corry about their rise…

LTW: “Alright Ben! Congratulations on hitting number two spot in our best tracks of 2020! How do you feel about that?”

Ben: “Thank you very much! I feel amazing to be honest. For it to happen now after 15 years of being in bands it’s great. It’s a vindication for all we’ve been doing. With The Battery Farm we’ve found our voice to the extent we haven’t before. It feels really fuckin’ good is the short answer.”

“You’ve sort of crept up on me slowly but surely. North Manchester bands are coming up with some clever stuff lately. You’re standing apart with a punk grunge blast of anger. Where do you differ from the indie landfill?”

“I think where we differ is we’re not self conscious. We’re not afraid to look fuckin’ silly or be sincere. I sometimes think there’s a lack of sincerity and a real pretentiousness amongst bands trying to be cool or whatever. We’re journeymen. I’ve gone bald and got a belly. I’m not a hot young teen or anything like that. We just accept who we are which makes us stand apart. We have fuckin’ fun and try and cover everything with it. We have concept and like creating our own little universe. It’s liberating having not to meet the normal expectations. That’s where we’re refreshing and stand apart. We’re not afraid anymore and it’s a beautiful thing”

“You sort of remind me of the scene I was involved in during the early 90’s, a small underground pocket of punk grunge bands playing the tiny venues. We just stood against all the average indie coming out in our own little pool. A load of like minded people who were into loud fuck off music”

“I’m not going to slag off the average indie because if it makes them happy that’s fine. I don’t actually care if certain bands don’t want to have fun and wit in their music if that’s what they want. I used to be all big bully bollocks and angry about all that stuff around 2005, but no, I’m fine, I don’t care. I’ll do what I wanna do”

“It’s like your track off the EP, Excellent Public Speaker hit the music scene with a fuck off blast of anger, a killer bass line that melts into fury over Boris and his clowns. A lockdown bitchslap at a plastic Trump”

“It’s weird really. That was the last song we had written before lockdown and we actually got to play it live. The timing was so brilliant. It’s our favourite track on the EP and we’re glad you picked that one for your best of track. We just wanted to lash out in support of the forgotten generation of kids and people. Parents who have taken it for granted and now it’s all public cuts, a climate crisis, proceeded by an international health crisis. The Battery Farm is all about a look at the world, a scream at the world”

“How was last your last gig at Yes with Cold Water Swimmers, San Pedro Collective and Heavy Salad in December?”

“We’ve known CWS and Heavy Salad for a while, plus Leon The Pig Farmer was on too. Top lad. On the day it was a really good set. We couldn’t do it as a full set so I did it acoustic which is not really my thing live. It turned out well and it was nice to put a bit of a spin on the songs like Maggot Line which I started as a stuttering Sweet Jane rip off. I was pretty pleased and it ended being a really good day”

“We’re all looking forward to your debut album at Louder Than War. How’s that panning out and do you reckon you can get Steve Albini on board or ‘Ding’ Archer?”

“I’d love either of those to be honest. At the moment we’re going back into the studio in January. There’s no plans for an album yet. We’re gonna do another EP first. We’re using Dave Jones at Red City at the moment in Shudehill. It’ll be out in the middle of the year. Album wise, tentatively we’re gonna re-record some old songs like 97/91 and Crude Oil Water. I’m not saying we definitely will have one but my intention is to hopefully have an album out by the end of this year at the latest.”

“This pandemic is a fucker as you know. Have you got any plans for gigs coming up?”

“We’ve got something coming up with Deco Records soon with The 99 Degree who’ve I’ve know for years, The Pagans S.O.H. are on. They’re fuckin’ quality. Some of the things you’ve said about standing out and bands being different, I don’t think anyone does what they do with a frontman like Marcus as a vocalist. We just don’t know what the fuck is going on yet. We’re just planning what we can. All of us are just building from the ground up at the moment.”

“So Ben, what are the bands influences at the moment and where do you get your style from?”

“Well, we were asked this question the other day and Dom (guitarist and brother) was trying to be abstract by saying “Drills from the street” and I was seeing where he was coming from, but in terms of actually songwriting it’s a bedrock of The Smiths, Elvis, Leonard Cohen, The Manics. In terms of the songs we’ve been writing, the bands that sort of embolden us, that make us do what we’re doing so we don’t look like charlatans, are bands like Strange Bones, Sleaford Mods, Witch Fever, Idles. This sort of wave from the last three or four years that are really vital and honest and innovative. Punk bands, and that’s not to say we are hitching our wagons riding on any coat tails. I fuckin’ feel like we’ve got an original voice and something important to say. Those are the bands that make us feel like we could fuckin’ say it and not look fuckin’ stupid. In short without going on, those are the bands that make us want to do it in the first place. People who have a powerful presence like Sinatra and Scott Walker. Even Neil Sedaka. I love people that can draw you through them without trying hard to do it. It’s really important to have a wealth of listening and not be a philistine and cut yourself off from things by trying to be cool.”

“If we’re all going to die, what would you like to do before fucking off?”

“Ha Ha! I see what you’ve done there! What would I like to do before I FUUCCK Off… There are so many things. If I was dying and I’d completely accepted it and there was no Covid or anything like that. I would like… Do you know what? I’m gonna give you a really lame answer. Just spend it in the house with my wife and my cats and my son. Just something not out of the ordinary. And savour it. Just a boring mundane dad. That’s more rock and roll than trying too hard. It’s the Warhol thing of finding joy in the mundane. A bit like Poor Little Rich Girl the film. I’d go down that route and I’d be happy with it”

Two North Mancs having a proper chat about life, music and the strength of the scene at the moment. If you get the chance to check out any band this year live you need to put The Battery Farm at the top of your list. Stunning and powerful…