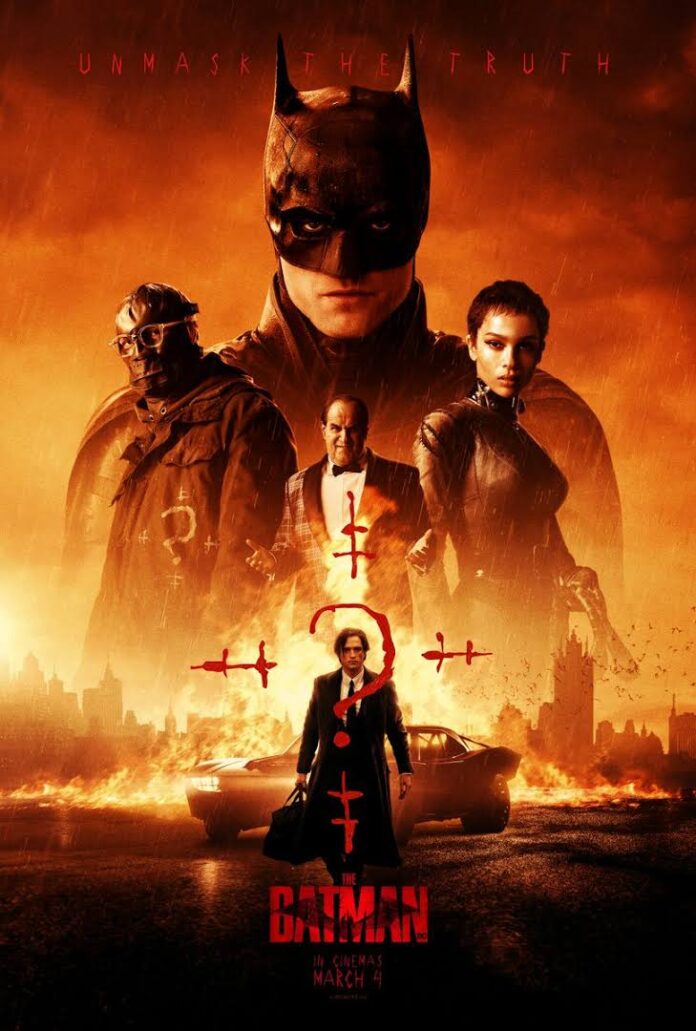 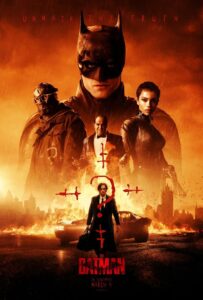 The Batman opened in cinemas across the UK last week. Long-time fan Nigel Carr attempts to unravel the timelines and give you an insight into the film, without, hopefully dropping any spoilers!

The film opens through binocular lenses scanning a Gotham high rise. It’s dark, raining and there is the sweetest Ave Maria playing in the background. It sets the scene for what is essentially a re-boot for Batman, having lost itself in the Justice League franchise, which featured the overly muscular and frankly, way too powerful Ben Affleck playing the lead role.

The Todd Philip’s directed Joker, which came out in 2019 took us back to when Bruce was a small boy, maybe 8 or 10 years old. It’s not specified, but he was young enough to witness the death of his parents  Thomas and Martha Wayne at the end of that film. A scene which originally appeared in the first Batman reboot in 1989, where a young Jack Napier, (who became The Joker), killed the couple in a convenient departure from the comic book version. Who can forget the string of pearls shattering to the ground in both?

The Batman is set 20 years after the couple’s death, with what appears to be a late 30s Batman taking on the role of ‘Vengeance’. A word which is used frequently throughout the film. In this version of Batman, we are essentially joining up the timeline between Arthur Fleck’s Joker and Christian Bale’s Batman from the Christopher Nolan’s Dark Knight trilogy –  Batman Begins, the incredible Dark Knight and the patchy Dark Knight Returns. Still with me?

In the Nolan trilogy Michael Caine is presented as Alfred. Employed be Thomas Wayne as more than just a trusted Butler, he may have made a brief appearance in Joker as one of the men behind the gate, shielding young Bruce from an over excited Joker, who proclaimed to be Thomas Wayne’s son and therefore Bruce’s cousin. The final scenes of Joker suggested that this may actually have been the case, despite evidence to the contrary from Arkham State Hospital where his mother spent her early years, suggesting the contrary. This is what it’s like in conflicting Batman universes!

So The Batman does a neat job in connecting up Joker to the ‘middle’ re-boot, presenting our ‘detective’, (as he’s referred to in early Batman comics) as a young man, finding his feet, avenging the death of his parents; An important point, which we will come to later.

Alfred is played by Andy Serkis. Yes, the man behind the original reboot of Hulk, Lord Of The Rings and The Hobbit’s Gollam (Possibly his finest hour?) and of course Ian Dury in Sex & Drugs & Rock & Roll. By using Serkis with his Cockney accent, Matt Reeves not only joins up the dots with Batman but also with Alfred, who one assumes is a younger Michael Caine, who played the part in Nolan’s trilogy. Serkis is no Michael Caine and apart from appearing like the shopkeeper from Mr Benn on more occasions than I care to remember, he frankly is not as good an actor as Caine, so doesn’t achieve the depth of believability we would expect from the role.

Moving on to The Batman himself. Pattinson is a good actor. Who can forget his role in Harry Potter’s Goblet of fire, his first major role? Yes, I admit that apart from the odd episode of Twilight, I haven’t seen him in anything else, but he generally comes across well. Why? Because there are no major goofs, the dialogue is delivered straight and his physique (he’s put on some muscle) seems about right for the young Batman. That’s where it pretty much ends. He’s OK, is about as far as I can go with than one. Maybe it’s the way he is directed?, but you rarely get a glimpse of the person inside. And while I wasn’t expecting the level of character building put into Joker, if there’s one thing that lets the film down a little, its how he plays the role. It’s dark and brooding, that’s all I’m saying about it! Make your own mind up! Clearly the character still has issues, but there is never a break in the performance, no glimmer of a smile.

When the kit comes off, and the eye make-up is smeared down his face, hair all over the place, he reminds me of Jason Lee’s The Crow, and maybe a little Johnny Dream; Tom Heywood’s alter ego in The Blinders. In fact in one scene he is referred to as Johnny, so who knows? Which brings me on to the kit and gadgets.

If we are right about the timelines, then we have a young Batman who is still finding his way in the world, and that includes his use of gadgets and the clothes he wears. He has, what looks like, with its sculpted abs and shoulder pads, a heavy suit, a light leather cape and a leather cowl cut straight across the base of the nose, once again suggesting it was an early version. For me, the suit is rather too developed considering he hasn’t really got going. There are the usual tools of the trade, the cutting device on his chest which snaps conveniently into place, is rather too conveniently revealed, if you get my drift, and the flares and weapons, all in place for exactly the times he needs them. At no time does he go ‘fuck me I’ve run out of bullets’!

The tech is interesting. Despite the apparent setting of the film in maybe the ‘809? ’90s? – (you never really know with those art deco motifs), all modern tech is there, from the big screen mobile phones to iPads and computers, although in one scene there is an unexplainable old style computer screen with its flashing green curser. So despite the  setting being pre-Bale it was mostly modern tech. Interesting, that Dark Knight was almost too techy, if you know what I mean?

Batman’s bike, (I am no expert) looks like a standard ‘fast’ motorbike with no additions. Unlike some of the ridiculous Batbikes in previous movies and the cars are a stroke of genius. Batman drives two; the first, black of course, looks like a jacked up Corvette Stingray with huge rear engine and red lights, reminiscent of the ‘60s Batmobile. The second, a huge slab of what looks like ‘80s tech with an enormous afterburner on the back, again echoing the Batmobile but also the beast used in Dark Knight. A kind of mid-point. The latter is hugely powerful without giving too much away.

I’m not going to go into too much further detail as it will probably spoil it for you, but we see the detective go from vengeance to vigilante. Safe to say that there are appearances by other Batman universe characters in the forms of The Penguin – a revelation in appearance, mood, and delivery from the excellent, and frankly unrecognisable Colin Farrell, The Riddler and the sinewy Catwoman, with her questionably knitted, mini-balaclava, who despite her waiflike figure can’t half pack a punch!

Other characters such as John Turturro as Falcone, mean and sinister, and Jeffery Wright, solid and believable, as Commissioner Gordon are faultless as is the supporting cast.

Overall, I was completely sucked into The Batman. I had a centre seat in a mostly empty theatre, so, apart from the cold, had the best experience possible. I was intent in understanding every plot twist and turn like never before and the film as a whole, at almost 3 hours swept by. Unlike Dark Knight, with it’s extra ending sequence, it didn’t feel long at all. The sign of a great movie, and despite my knit picking (come on! I’ve been a fanatic since 1966!) it’s an excellent addition to the Batman franchise.

The Batman is showing at cinemas around the UK.