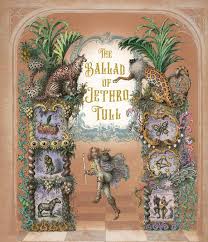 A pretty thorough account of the history of one of Britain’s iconic bands in their own words.

A Jethro Tull book that follows a similar format to Barney Hoskin’s Trampled Underfoot that tracked the flight and fall of Led Zeppelin through quotes from various members and associates that proved much more fascinating than it first sounds.

Granted there are a couple of Tull tomes on the bookshelves of varying quality, the pick being Dave Rees’ Minstrels In The Gallery and his A New Day interviews which take us into the places where other books don’t reach. He’s played a part in this book along with Martin Webb, both of them fans who aren’t afraid to, as Ian Anderson has said, “tell us when we’re shite, in the nicest possible way” and have become part of the inner circle and whose involvement which an element of quality.

However, it’s been down to Mark Blake and editor Mal Peachey to pull the strings and provide the narrative through via the words of band members and management. Of the thirty-plus players who’ve done their time in Tull, it’s Ian Anderson naturally – who has always been seen in some capacity as ‘Jethro Tull’ – whose words provide the bulk of the narrative as such.  There aren’t too many places where the contributions of the likes of Martin Barre, Dave Pegg or Dee Palmer aren’t regularly punctuated without the insertion of an Anderson comment. He also captions the selection of photos, in his usual pithy style.

It’s what’s been labeled as “the definitive Jethro Tull story – as told by Jethro Tull.” From the (heavy) horse’s mouth. If it were a folk ballad, it would run to thirty-eight verses; a piece of work that lives up to its name.

So, taking the sensible step of a chronological account, we head all the way back to the days where lines of people queued outside the Marquee and Tull played in Hyde Park in 1968 – there’s grand photo evidence. The details and recollections from those early days is memorable; the less well documented formative periods are often the most fascinating and compared with the weight given to latter-day Tull, there’s plenty to take in before we hit the days of Gerald Bostock and the deliberately obstinate concept album days. Even the band members accept the limitations of A Passion Play – “a step outside the comfort zone”, “a certain amount of self-indulgence”, and particularly “derivative, repetitive and lacking in any formal or melodic direction” are quite scathing, although bizarrely, it’s a fan favourite.

It leads into not the first mention of stage costumery;  zebra suits, musketeer moments, tights and codpieces are pictured and explained in all their glory and the trappings of fame and while the image is being, erm, refined, the music goes on as Martin Barre talks of Minstrel In The Gallery as Anderson “at his writing peak.” Snippets and anecdotes, often from Dave Pegg, that make the tome an enlightening experience as well as the occasional healthy self-analysis. The Warchild string quartet a prime example – “We couldn’t hear them, the audience couldn’t hear them and they couldn’t hear themselves. Apart from that, it was a huge success.”

Personnel (and personal) issues see thoughts of David Palmer shoehorning himself into the band, the angst surrounding John Glascock and the brief superstar guest status (“musical pomposity”) of Eddie Jobson bearing in mind the often transitional nature of being a member of Jethro Tull and the demands of life on the road with an internationally famous rock band. Dave Pegg talks of being in a group of mates who play some music (Fairport) and being with a set of musicians that aren’t mates at all (Tull) is a fair summary, from one point of view.

As we hit the Eighties, the detail prevalent in the early period becomes less and the musical (and image) changes reflect the new era of technology although Anderson confesses that 1982’s Broadsword album should be seen as the true final part of the folk-rock trilogy rather than Stormwatch. The at the time, much-maligned Under Wraps – “I hated recording Under Wraps” says Pegg – has aged better. Barre actually loves it and Pegg admits o enjoying the live shows as twenty-five years of latter-day Tull are skirted in whirlwind fashion. The concession to the retirement of Tull as a band and the emergence of Anderson as solo artist/keeper of the Tull flame is still a murky area, (“I always thought it was me and the band was Jethro Tull” doesn’t exactly help) while some of his excellent solo work, or is it Tull in disguise, earns scant mention.

Ultimately, The Ballad Of Jethro Tull is an absolute must for fans. Production values are excellent although some of the less than hardcore fans may have balked at the Signature edition. Hardbound in a, for want of a better word, cushioned, cover, the illustrations are liberal and varied from the familiar to a whole raft of images which must be new to most of us plus the fact that Anderson has played such a major part in the process adds an element of authenticity (and his legendary control).  One for under the Christmas tree, with the Jethro Tull Christmas album playing on the stereo and a warming tot to hand. You bet.

All words by Mike Ainscoe. You can find more of Mike’s writing on Louder Than War at his author’s archive. He can be found on Facebook.