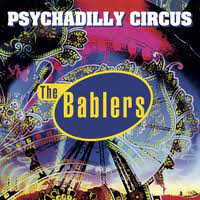 15 track album on Big Stir by reformed Finnish new wave/power pop band The Bablers, including singles Love Is Everything and Queen Of Yesterday. This outfit originally made their debut back in 1980 with What’s It All About and this third LP comes after 1998’s Like The First Time..Ian Canty find himself babbling on and on like normal…

The new album by The Bablers Psychadilly Circus pits the listener right back to the heyday of late 1960s pop – there’s no mistaking it for Psychobilly Circus from the get-go! This Finnish act show up here on Big Stir in 2021 with a lengthy history behind them. Hailing from Helsinki, they originally came together back in 1980. They put together new wave and power pop influences on their debut LP What’s It All About, which was released in the same year. It made a big impression in their home country, but after the Suddenly/Day By Day single in 1982, the band parted ways. Like The First Time, a comeback collection, emerged in 1998 when the band regrouped, but after that there was another long gap in Bablers’ activities before the album we have here.

The Bablers’ current line up is Janne Haavisto, Pekka Gröhn, Hannu Pikkarainen and Arto Tamminen, each playing a variety of instruments and singing, with Arto being the band’s lead vocalist. In my view Big Stir is the perfect home for The Bablers’ brand of painstakingly constructed, pretty 1960s influenced pop/rock & roll and Psychadilly Circus positions itself gloriously in a multi-coloured, late 1960s milieu. Though on first glance this may seem like evidence of a purely retro mindset, the tunes, energy and sheer joy that The Bablers bring to the LP mark it above such considerations.

Having said that, the first track Love Is Everything skates pretty close to a John Lennon/Beatles piano ballad sort of thing, but sets forth with a steady purpose and is beautifully put together, so I will grant them a pass. Then comes the jangle and fuzz of the title track, a neat slice of modern psychedelia with cowbell that ends by phasing out coolly. Queen Of Yesterday puts the brakes on a little, a sad but enthralling character study that uses pared-down verse sections to emphasises the band’s power and poise when they come in. The organ work here is lovely too.

I Hope It Wouldn’t Rain Tomorrow gleams with sparkling guitars, pitching itself at the point where power pop and new wave meets and in doing so produces an addictive pop rocker. The alluring music box sound of All Because Of You comes next and then a lowkey acoustic meditation in Unidentified comes with again some nice and very tasteful keyboard touches included. The brief folk picking guitar of Where Were You My Friend sets the scene for Some Tears, which sets forth in a similar manner to Love Is Everything, with a dreamlike atmosphere being evoked. The rolling piano number Angry Young Man follows with almost a “show tune” feel, there’s a good playful side to the melody of this number and whistling that would have Roger Whittaker envious too!

Then the listener is treated to an attractive laidback Love To Live, but it isn’t without a sting. Some nicely judged, careering guitar also breaks through into the sound and it all builds to something magnificent. Walking On Sunny Beach takes the pace up a notch, mixing psych pop/rock with a bright, jangly refrain and Child Of War, which comes next, goes right down to harmony vocals and acoustic guitar, before strings drone into earshot. A nicely sparse arrangement that is performed in a delightfully light fashion.

Then When You Were Growing soon snaps one out of a reverie, setting out with some urgent guitar jangles and a real kick. The Bablers don’t forget to include a cracker of a tune too, which makes for a beguiling pop sound that is both breezy and addictive. Singing With The Bluebird then reverts back to gentle acoustic folk and finally the LP concludes with Speedy’s Sixties Mix of Love Is Everything, in effect bringing the record full circle.

The arrangements of these songs are rich and full of attention to fine detail, which help make the individual tracks special and feel part of the whole. It is clear how hard The Bablers have worked to make Psychadilly Circus such a fully realised construction. This album is full of charm, good melodies and an easy-going swagger, just built for anyone into light pop sike and/or shiny power pop that has been given a fresh reworking. A classy pop confection with plenty of hidden depths and and cool atmospheres for the listener to plunge themselves into, Psychadilly Circus’ brand of kaleidoscopic fun sports plenty of tunes that are built to last.