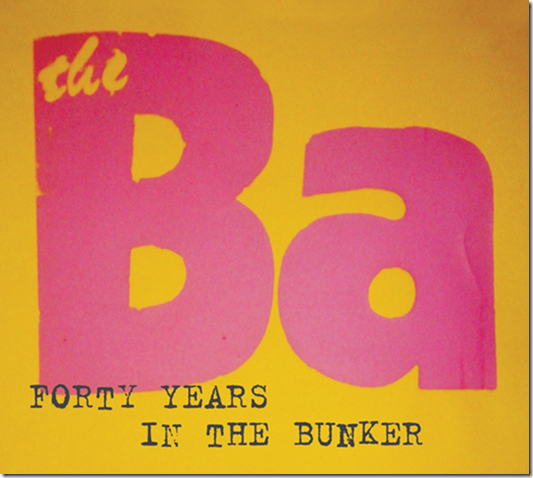 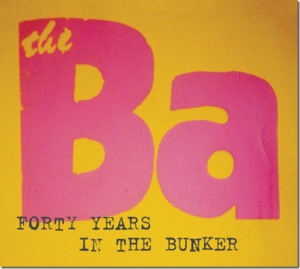 The Ba: Forty Years In The Bunker (Ba Recordings)

This will be of interest to punk collectors and anoraks. A 1977 ‘provincial punk’ band who never released anything at the time but reconvene after 40 years and make their debut album. But, they were from leafy Winchester in Hampshire, so more art-school pub-rockers with a working knowledge of  the Velvet Underground that dole-queue guttersnipes.   Ged Babey comes to praise not bury them however.

I feel like the king of the world tonight / Playing these songs for you / Everybody’s trying to tell me what to believe / but I don’t know what to do.

Oh, to hear some authentic 1977 punk rock which I’ve never actually heard before.  The Lost Subway Sect album.  A decent recording of Manchester’s legendary the Worst…

There is a niche market for albums like this. Punk Collector obsessives who have to hear everything ever committed to tape in 1976-78.  Only, this isn’t quite their (un)Holy Grail…. but it is very interesting and it is fun.

I only knew of the existence of the ‘legendary’ Ba due to Oliver Gray mentioning them in his writings over the years.  Winchester is regarded as posh and a bit boho if you live within commuting distance from the city. (In reality it has its dodgy estates and drug problem like anywhere).  I always wondered what the Ba sounded like… and now I know!  (A student) Dr Feelgood meets a (virginal) Modern Lovers,  A mixture of teenage brashness and naivety, which somehow, remarkably they have recaptured four decades on.  How they did so with this level of honesty and restraint; – resisting improving, updating or changing the sound, style or content – is quite astounding.

Nick Jacobs, co-founder of seminal Bristol indie-rockers The Blue Aeroplanes, launches his new/old project… an album of classic New Wave music from the dawn of punk, played by the Ba, a band named after the first sound made by every child in every culture – the most primal sound in the universe. Originally active from 1976 to 1978,.. until February 2017, none of the members – Jacobs, Kevin Rayner, Sandy Sanderson, Kevin Burrows or Mark Hudson – had played a note of music together since 1978. The result is an uproarious clash of jagged riffs, fractured-psychedelic guitar and quirky personal lyrics: think Dr Feelgood meets Syd Barrett. This is music heard straight down the line from 1976, but played with a 21st century intensity and self-knowledge.

The Velvets-meets-Feelgoods influence manifests itself as a sound vaguely akin to early Wire or Monochrome Set at times and Lloyd Grossmans band Jet Bronx and The Forbidden at others.  The tinny, scratchy  no-effects-pedals guitar sound is typical of this kind of more-tuneful punk band – and the thing which puts more-hardcore punk fans off.   Vocally as well its more semi-spoken, clipped than bark, snarl and whine.   Every small-town had a band like this –  well-spoken young men who liked the idea and opportunities presented by punk –  but were too clean cut and well-behaved to fall into the caricature tabloid version.

Six Weeks is a wonderful opener in Wire/Mekons vein with an inadvertent steal from the Motors Dancing The Night Away and a line, ‘Hold your breath and count to six’ which echoes Billy Liars  ‘Count to five and tell the truth’. An unfortunate line about ‘being poor is just a joke’ is open to the same kind of misinterpretation as White Riot: being a skint student is not the same as poverty. A  summer job on a building site is described in near Ballardian terms as being ‘in the sun with the yellow machines’.  It is a great piece of nippy power-pop though.

Diamond starts with exactly the same Chuck Berry riff as the one the Prefects used for Going Thru The Motions  before going off on a different path.

Long, Long Hair betrays their pub-rock, hippy roots and is just a song about a female object of desire with tresses deserving of caresses… You’re A Dream is teenage lust with harmonies and vague, early Pink Floyd-isms.

The Day shows an unashamed fondness for Syd Barrett style whimsy and slide-guitar and seems to sneer at and pity the wage-enslaved and married working class.

Breakdown  is a great exemplifier of punk-by-numbers, ending with an obligatory ‘ugh’.

World Tonight is naive teenage bravado and psuedo-intellectualism with under-cooked rock’n’roll chops and pedestrian drumming and an affected sneer in the vocal.  It’s actually so baad and so authentically an approximation of how they sounded back then, that its a work of accidentally ironic semi genius. (No, that doesn’t make sense perhaps, but neither does the song!)  The Grateful Dead on a mortgage, playing in Sainsburys…

Bus Garage Cafe – the Ba’s legendary song about a legendary place to hang-out in Winchester sadly is a bit flat and of no real significance unless you knew the place and had any affection for it – after all it was just ‘OK’  and not fab, groovy and the place-to-be, just ‘ok’.  Damned by faint praise… like me with this album….

It’s an enjoyable, fascinating and strange album though, by a band who maybe, just maybe, could’ve gone on to better things.  There are tiny hints of XTC in a couple of tracks….

Ultimately it is a great time capsule, reconstructed from memory, and a thoroughly worthwhile project and worth buying, if you are interested in the true sound of provincial punk and all its variations and permutations.

Not the ‘great, lost, punk’ album, but the vital, final, missing piece of the jigsaw puzzle which makes up the full picture of punk’n’new wave in the UK, 1976-78.

Doing my research, and with the web being what it is, i discovered that Ba member Mark Hudson is a top media chap – writing in the Telegraph twelve years back – he used the opportunity to tell the tale of his bands support slot with Johnny Thunders and the Heartbreakers.  A fascinating piece of writing … but the end section is both pertinent and somewhat ironic.

I don’t feel nostalgic for punk. I never listen to the records. I find it impossible to invest them with the feeling they had at the time. But I did watch a TV documentary on the Clash a couple of years back, and I cringed throughout. Was I posturing prat? Probably. Were we better than Johnny Thunders and the Heartbreakers? Of course.