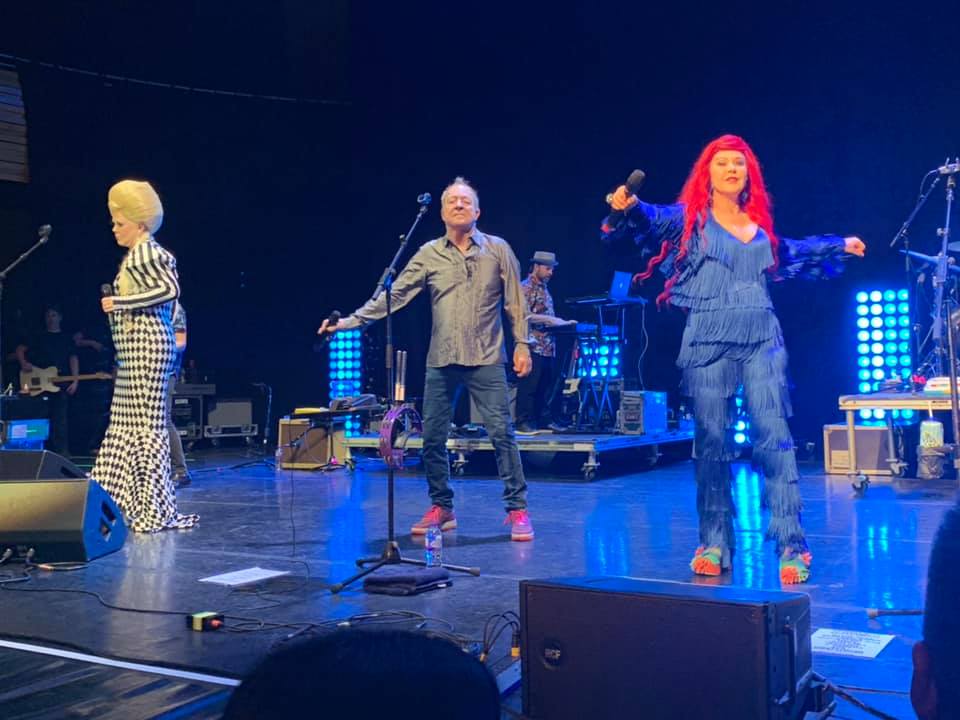 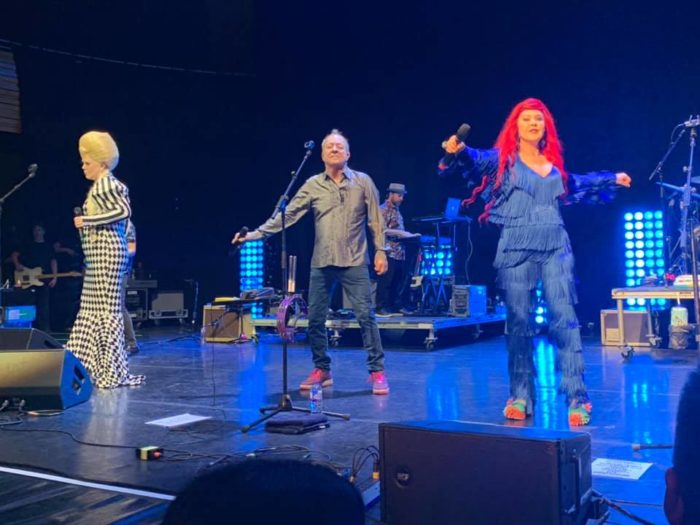 Have we forgotten about The B-52s? The massive success of the group’s 1989 single Love Shack and its irrepressible parent album, Cosmic Thing, launched the group into the global pop stratosphere 11 years after their debut single Rock Lobster established them as New Wave cult heroes. Thirty years on from their peak commercial success, The B-52s are acknowledged and respected as LGBTQ pioneers, but have the group’s musical innovations and influence perhaps been overlooked? Anyone who attended this barnstorming concert would have been left in no doubt about the cult group’s significance and, more importantly, their sheer, infectious joi de vivre.

Tonight’s set contained no fewer than six songs from the group’s celebrated 1979 debut album, and three songs from its 1980 successor Wild Planet, throwing the focus of this high-energy performance on the group’s art-garage early years.

Opening song Private Idaho got everyone up on their feet almost instantaneously, Cindy Wilson cutting an affectionately imperious figure with her towering blonde beehive wig and sensational, sci-fi movie outfit. The band’s talismanic fire spirit Kate Pierson was a ball of energy from the start, dancing almost non-stop throughout the show, while her singing remained pitch-perfect and as powerful and inventive as ever.

Mesopotamia followed, with Kate and Fred essaying their own surrealist take on the Nile Dance, and Tracy Wormworth supplying a deep funk undertow on bass.  “If you’re a fan of historical inaccuracies”, quipped Schneider, “well, that song is full of ’em”. The frontman was in mischievous form throughout the concert, performing each song as if it were brand new and peppering the set with his trademark witticisms.

To the audience’s delight, Cindy was next n the spotlight for one of her key solo turns,  Give Me Back My Man, a prime cut from the Wild Planet album. By this point, the party was in full swing and the high energy vibe continued through the churning garage-rocker Lava, the trippy pop of Channel Z and the bracing title track from 2008’s excellent Funplex album.

Fred left the stage for three songs sung by Kate and Cindy – Legal Tender, 52 Girls and a rapturously-received Roam – before returning to crash the party, complete with a pineapple in hand, for an exuberant Party Out of Bounds.  There was not an ounce of fat in the cannily-programmed set-list, the momentum continuing through the closing three songs of the main set, Cosmic Thing, a wild take on Dance This Mess Around and the closing Love Shack, which incorporated a few bars of the classic Low Rider by War.

Perhaps this was a subtle tip-of-the-hat to the North-East audience, since local hero Eric Burdon of  The Animals was one of the original members of the Californian funk group. Kate Pierson hadn’t forgotten her own connection to the North-East, as she told the story of the time she worked behind the bar in The Anson pub in Wallsend, near Newcastle, much to the delight of the Geordie audience.

Returning to the stage for a well-earned encore, the group launched into a feral Planet Claire, Greg Suran excelling with his  guitar-playing, invoking the spirit of Ricky Wilson’s propulsive style. Without missing a beat, Kate then announced “Here’s a punk song!” as the band crashed straight into another ferocious garage rocker from The B-52s’ deathless debut album, 6060-842, teeing up the inevitable closer Rock Lobster – delivered with bristling energy – to cap a tremendous set that demonstrated exactly why this group of lovable oddballs is so revered.

Was this really The B-52s’ farewell European jaunt, as the pre-publicity suggested? Let’s hope not, as goodness knows we need their life-affirming, freak flag-waving joyfulness now, more than ever.

Live image and You Tube video by Connor Clements, used with kind permission. More work by Connor can be found on his Instagram page.