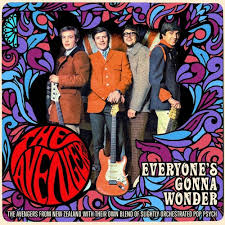 The singles and selected album tracks by New Zealand 60s Pop band the Avengers with their big NZ hits including Psych classic “Everyone’s Gonna Wonder”….LTW’s Ian Canty pops on his bowler, tests his umbrella for strength, alerts Mrs Peel and travels down under…………..

Manufactured pop…..it is always a bad thing, right? Not a new idea though, been with us right back from the early days of popular music when singers were selected on looks alone to be the latest teen heart-throb. Some would say the Pistols were even a manufactured band, not something I would agree with as Steve Jones had them in operation before even involving McLaren and only Rotten could say to be chosen because of his look (and much as I love the Damned, this fact hasn’t stopped Captain Sensible going on about it ad infinitum). Then on the other hand a bit later on you had the more cynical outfits like Take That and Westlife, coming up to date with the risible X Factor gubbins.

All of which has rather gotten me off the track with regard to Wellington, New Zealand band the Avengers (it is worth pointing out that this 60s band has nothing to do with any other act of the same name, including Penny Houstons’ brilliant SF Punk outfit of the 70s), but I mention it because the first item on the press release stated that the group members were “hand-picked” by manager Ken Cooper in 1966, possibly to cash in on the Paisley Pop of the time but more to be the resident attraction at his club “The Plaice” (insert “angling for talent” joke here). As if to compound the feeling of a put-up job, outside songwriters were drafted in, most notably Chris Malcolm and originally the band were dressed up in suits and bowlers like John Steed to go along with the name. Cooper also, pre-shadowing the antics of Talcy Malcy, tried to build a mystique about the band by keeping them and the press at arms length.

With all this out of the way let us get onto what is truly important, which of course is what do they sound like? Well smooth harmony vocals seem to be a large part of the appeal of the Avengers and this is coupled with the kind of groovy, wigged-out pop typical of the era (not quite Psychedelic or Freakbeat, but with trace elements of both seeping into the mix, as well as orchestral touches). That they were aimed squarely at the hip teen market of the time is to state the bleeding obvious, but there are shades of the kind of craft that the Bee Gees honed around the same time, never a bad thing.

For a project that appeared to be built on such “fly-by-night” foundation they had extraordinary staying power, clocking up three albums and many local hits over the period between 1967 and 1969. This can be best be explained by the fact that the Avengers were far from being management stooges and having a fair degree of singing, writing and playing talent which would reveal itself during the band’s lifespan. In this way they resembled the UK band the Herd. Like that outfit they became enormously successful in their home country and this led to the Avengers regularly pipping the Beatles in local “Best Group” polls and recording radio spots for NZ stations (some of which are included here), though a decision to not take up an offer to go the States in 1967 (the fact they would have to pay for their own passage and costs seemed to be the deal-breaker) appears to have been crucial in the reason why they could not turn their local success into something more widespread.

Though on a whirlwind of tours, recording sessions and personal appearances the Avengers crashed to earth in 1969 when band leader and vocalist Dave Brown was hospitalised. He was briefly replaced by John Pugh who cause havoc in the band, so after pondering his future during his recovery Brown decided to quit and return home to NZ (the band had concentrated on building a following in Australia as their US aspirations crumbled). The remainder of the band certainly didn’t want to continue with Pugh, with guitarist Clive Cockburn unhappy with the lack of time he could give to his writing (he had become the band’s main source of songs after Chris Malcolm had bailed) and the rhythm section Hank Davis and Ian McDonald tiring of the Pop scene, it altogether spelt the end of the Avengers’ brief but spectacular career.

Though their “stock in trade” was flowery 60s Pop music they occasionally struck out for something a bit harder, like the expansive garage cover of “Night Time” or the alternately quite Punky then trippy “You Don’t Understand”. “Flower Girl” has the kind of swirling keyboard motif that the Animals scored big with and a bit of Beach Boys in there as well. The title track here, their breakthrough record “Everyone’s Gonna Wonder” starts out with a piano wire twang and then it becomes a restless, half-speed Seeds organ-dominated stormer. The harmony vocals that were one of their key strengths are shown to perfection on “I Wouldn’t Do That”, a wobbly pop classic and the Soul/Troggs amalgam of the basic but beautiful “You Better Come Home” which saw them through the occasional misfire like “Only Once In My Life”.

Despite their rather hokey beginnings the Avengers often managed to provide high quality, pristine 60s Pop and though mostly veering on the side of gentler Psych they weren’t afraid to on occasion go a bit tougher too. They were a Pop band true enough and no doubt bolstered by “outside” help but with plenty of quirks added in to keep things interesting. This disc is imbued with some fine tunes and on hearing one cannot help but draw the conclusion that with a bit of luck the Avengers could have been a big noise in any country rather than just their antipodean homeland.