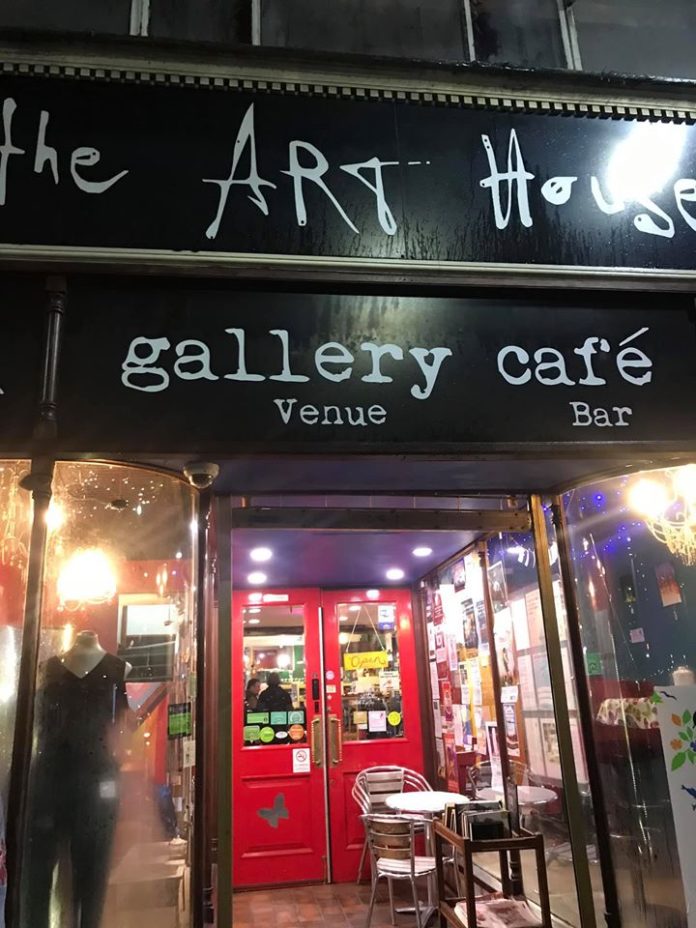 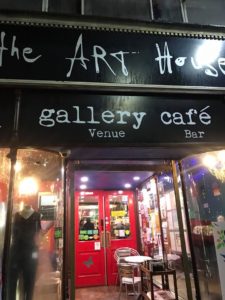 The Art House, Southampton needs help to survive… LGBT+ Arts space is a cultural oasis in the city.

I have gently mocked the Art House in the past: all very knit-your-own-muesli, green-party,  arty-farty,  rad-fem  hippy-chic – but it is a really great, inclusive place – an oasis of calm and grass-roots art & culture near the centre of Southampton.

Former staff member and artist Henry Baroche told me:  The Art House is very much what the name suggests – a home for art, creativity, aesthetic beauty. But it is more than that too. It is a home for community engagement. It is a safe haven for the disaffected members of society. It is a home for all who wish to lay their hat there, for however long.

The Art House finds itself at a crossroads.  ‘Call it a day’ or make ‘one last big push’ for donations along with a restructuring of the business, with less emphasis on being a place to eat and more focus on what they’re all about – the art, the creative writing, theatre and community, campaign groups and music.

Read their full statement and how you can help in the ‘details’ here.

(Henry continues..)  I worked at The Art House over the course of two years, before moving to my current home in Bristol in August 2019. It was my first experience of a non-hierarchical organisation that put serving the community above all else. It has sincerely helped me to grow as a person, and will always feel like home to me. The many talented and varied people that have served it’s cause, whether as staff, volunteers, directors, or customers, are a testament to its value as part of the Southampton landscape.

The Art House has been built, sustained and grown over the course of the last decade on a diet of love, lack of sleep, laughter, tears, generosity, hard knocks, resilience, belief and compassion. To bring it into this new decade, it needs some more of that generosity in particular from you. Please give what you can.

By some sort of cosmic fluke my annual visit to the venue was the night the announcement was made. It was to the monthly ‘Moving Voices’ Open Mic Night, because there were two performers I wanted to see.

Hosted by Anita and Holly…“Moving Voices is a space where you can use your voice to say what moves you, or where you can just sit comfortably and be inspired by what’s on offer, there’s no pressure. A relaxed, non-threatening environment, this is a great place to try something new for the first time, or if you haven’t performed before.” 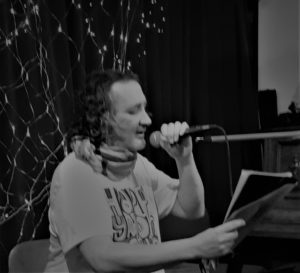 Marco (formerly singer with Lo-Fi Poet Band and Le Lizard Royale) is restlessly creative as a part of his self-help health and addiction struggles. I’ve written about his musical ventures for years but now he has come full circle, in that he started as a ‘ranting’ performance poet in the 80’s after being introduced to the work of the Beats and Bukowski. and thought he’d give spoken-word another go…

Seated, reading glasses instead of his rock-star-shades, poems on a music stand and mic pressed up to his lips -twenty minutes of fast, furious, expressive, idiosyncratic, free-form words spilled out.  I knew a lot of the material from his online posting of his early morning thoughts  but the performance of it ‘live’ – in a open, supportive environment with no pressure, was surprisingly brilliant.  It was like an exorcism of all the ‘bad-stuff’ – an unburdening, but was ‘entertaining’ as well.  The gallows humour and random tangents got laughs.  The occasional ‘fuck’ was percussive. The speed of it gave it a downhill without breaks feel.

“I didn’t know you could swear in poetry” said Paul afterwards – a Moving Voices regular – a wayward character who read a great poem called My Team – a brilliant, simple rhyme about the staff at a hospital where he was a patient for a while.  Marco was impressed ‘That had me in tears.  Totally real’.

Majid Dhana is a young poet from Portsmouth who has been performing for some years now. Established in his home-town, it was his first visit to Southampton. His style is laid-back and measured but full of lyrical flow. He moves gracefully using expressive gestures and almost mime-like movements whilst he recites… he is just inspirational.  Full of wisdom and love for his fellow man.  Urging understanding of, and unity with those less fortunate. His poems shed light on dark subjects: homelessness, the plight of illegal immigrants who have no choice but to endure hardships and danger to escape worse…  As much in his delivery as the actual words, Majid really is a performance poet you have to see perform to fully appreciate. Humanity as art. ‘Brutally beautiful’. Soulful and inspirational.

(I’m a music journalist, so this is not my area of expertise perhaps, but..) Majid is a hugely talented young artist who deserves a wider audience. I saw perform purely by chance… and just had to see him again. I invited him to come to Southampton – and there was only one place where I knew he would be welcomed and appreciated… so I pointed him in the direction of The Art House.

Let’s make sure the place survives!

All words, except where specified Ged Babey