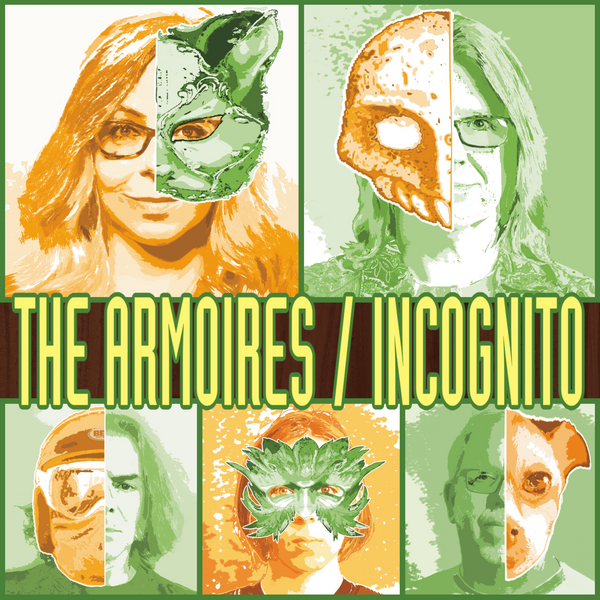 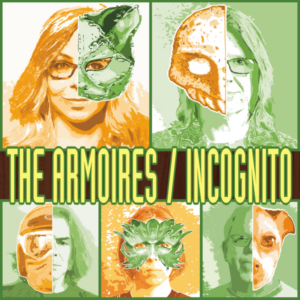 A new album with 18 tracks, 15 which were previously issued from October 2020 onwards as singles by the Big Stir label. These tunes were purported to be made by bands new to the imprint’s roster, but are actually the work of The Armoires themselves under a series of assumed names. Also included are three bonus offerings that are presented as “hidden” tracks…Ian Canty cries out “We’ve been Morgan Fishered!”…

This new album by The Armoires is a follow up of sorts to their second LP Zibaldone from 2019 (reviewed here). But it is one with a marked difference. From last October onwards they have masqueraded as eight new bands, busily crafting single sides for each project with the expert assistance of many talented folk drawn from the Big Stir roster.

The basic idea behind this set brought back good memories for me of Hybrid Kids, Morgan Fisher’s pseudo compilation from 1979 and also perhaps a little of The Residents’ frequent flights of fancy, specifically circa The Big Bubble (which I reviewed along with the other Mole stuff here). On Incognito The Armoires employ this masking technique to subtly shift the emphasis of their sound. While still retaining the warm and loveable tunes they have become known for, they also use the disguises they don to delve more into directions that they have not previously explored in depth.

To me it makes sense to look Incognito by considering the guises used and their contributions individually. We begin with the logically named October Surprise, who sought to bring an art rock flavour to their two tracks, a sparkling, fuzzy psych cover of John Cale’s Paris 1919 (the great Dolph Chaney helps out here) and their own giddy folk pop of (Just Can’t See) The Attraction, which is nicely restrained.

Next come D.F.E., which I don’t think stands for Department Of Further Education in this case. They give us I Say We Take Off And Nuke The Site From Orbit, which is almost anthemic and a straightforward cover of oldie Yellow River. The sound here is bright, upfront and with chunky guitar riffs plus violin embellishments – the band describe it as “sunshine sludge” and that is as good a notion as any, as both tracks really lift off on the choruses. Blake Jones puts in an appearance as part of The Chessie System, which seems to be more of a country-toned aggregation. You can hear the Anthill Mob approaching-style picking on the fast and fine Bagfoot Run and Homebound has a bewitchingly lazy lilt to it.

The Yes It Is jangle convincingly 20/20’s pure power pop classic The Night I Heard A Scream, a beautiful cover done just right. Blake Jones is back for their upbeat and neat take of XTC’s 1981 UK hit single Senses Working Overtime and then it is time for Tina & The Tiny Potatoes’ sole offering. Their version of Andy Gibb’s Words And Music shimmers in nicely and from there develops into a delightful piece of folk pop.

Zed Cats included a healthy serving of 60s garage pop organ on the dramatic and catchy Jackrabbit Protector and their punchy and punky Walking Distance is another ace. Both quickly made themselves firm favourites with your humble scribe and left me wondering what a Zed Cats album would sound like? Pretty blooming great I would wager.

A stately and graceful jangle introduces Ohma, Bring Your Light Into This Place, by The Ceramic Age and it definitely impresses. This is perfectly judged and arranged pop music with a kick and they follow this up with the pure laidback cool of Magenta Moon. The final “band” featured are Gospel Swamps, are described in the PR as “shameless vintage college rock”. Great Distances rumbles in, fast moving and mysterious guitar pop/rock with power and poise. Their Awkward City Limits is also full of good energy, guitars growl and an insistent piano line asserts itself.

Incognito ends with three hidden efforts, kicking off with the brief and previously unissued sound college The Armoires Are The Amine Beta Ring Sunshine Harmony Consortium (and who I am to disagree with that?). Country folk tune Shame And Bourbon is acoustically driven, like Ronnie Lane’s brilliant Slim Chance with dual male/female vocals. Lastly Ghost Of Fall Singer In Depopulated Griefscape brings fiery rough and tumble to an addictive tribute to the late Mark E. Smith. This provides a suitably enigmatic way to conclude what is a slightly crazed but excellent confection.

Despite its piecemeal and unique construction, the contents of Incognito hang together well as an album, with Rex and Christina’s voices provide the thread that binds things together. The aliases grant them the opportunity to dip into different sounds and styles that may not have occurred otherwise. I’m thankful they did, because it gives The Armoires a whole new line of attack.

I’m a sucker for these type of pseudonymous shenanigans from way back and apart from the fun engendered as the band dart behind their masks and experiment, this record is also stuffed full of great melodies, wisdom and memorable lines into the bargain. Even if you don’t know the story behind the album, that presents no barrier to enjoying it. The Armoires may be have been travelling incognito here, but perhaps without even the notion of doing so, they have provided an adventurous and top quality follow up to Zibaldone. Incognito, regardless of how it was made, is a record that is sure to be up there with the albums of 2021 when all is said and done.