Home Film and TV The Apprentice Week 7 – is this all getting a tad lacklustre?

The Apprentice Week 7 – the strategy challenge

After last weeks attempts at selling gourmet takeaway food in Edinburgh, this week saw the corporate cannibals of the polyester suited version of the Generation Game on the more familiar terrain of offloading fake tan on the perma-orange denizens of Essex. With quiz host Alan Sugar, as an even less likeable and less funny Bruce Forsyth, claiming this is his manor the pressure was on to impress from the off. This was basically a selling task (aren’t they all?) and with Nick-who seems to have outgrown his own hair if not his Boris Johnson plumy vowels- in charge of Team Sterling and, the ever on the verge of tears, Jade helming Team Phoenix it was an open race headed by two strong candidates. It will however ”â€œthanks to Azhar who seemed to have the word stuck on repeat- be remembered as the ”Ëœstrategy’ episode.

It was Nick, who with a more relaxed approach to overseeing his team whilst also willing to listen to suggestions, edged ahead from the beginning by sussing that fake tan was the way forward. By concentrating essentially on this and working out a price with good margins it was clear he was going to emerge victorious.

Jade however adopted a more haphazard approach and refused to listen to Azhars pleas to clarify her strategy-several times again and again, on and on ad nauseum- and ultimately this cost her team dearly in the final analysis. It was amusing to see human irritant Adam bond with former nemesis Jade and finally find his niche in an Essex market whilst miraculously somehow becoming less irritating in the process.

Anyway not much else happened give or take the constant use of the word strategy and the almost weekly occurrence of traffic jams causing stress and unnecessary hold-ups. Is it just me or is this series less dramatic with fewer balls-ups than previous ones? I know it shows the candidates as more professional but is dull to watch and lacks the bite and intensity of before as well as the schadenfreude of watching wanky, up their own arse know-it-alls get their comeuppance. The confrontational stances and face offs which characterised the series in the first place have now virtually disappeared and been replaced with low key grumbling and huffing and puffing with less bite than a toothless jelly baby. 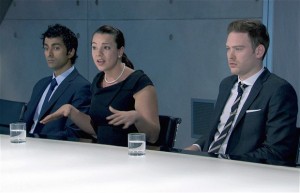 Even the boardroom which used to see people fighting their corner and savaging any likely opponent has witnessed little in the way of fire and last night was no exception after Jade’s team fell short and were ”â€œmarginally- beaten. By mistakenly choosing to take Tom- who is perhaps this years most measured and coolest candidate despite looking like Michael Buble after Weight Watchers- back into the final three and then immediately admitting she had made a mistake was perhaps not the most sensible ”â€œthat word again ”â€œstrategy. However, somehow Jade survived and it was strategy fanatic Azhar and his downcast attitude- even winning tasks usually failed to elicit a smile from his lips- with Sir Bruce- sorry Lord Whatsisname- quite rightly stating there was no point going into business with someone no-one was prepared to listen to as what he usually uttered was a complaint of some kind. Then there was the part with the conveyor belt and the cuddly toy- or am I imagining this and confusing it with that other game show again?- and it was all over, unfortunately bar the shouting of which there was simply not enough.