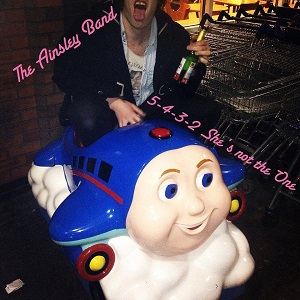 This could be one of the saddest albums you’ve ever heard. One of the saddest until you ‘get’ it. The basis to Michael Ainsley’s lyrics on 5-4-3-2 She’s Not The One are of heartache following a split with the subject’s girlfriend to the point where he contemplates suicide.

Depressing eh? Well no, not really because it’s also written with a degree of honesty and humour which makes it very appealing. There was a certain Mancunian songwriter and lead singer who was often accused of being depressing but wrote some of the loveliest lyrics you’d ever heard, if you bothered to listen.

Much the same can be said about Ainsley. Another bottle of whisky, another argument, another self-obsessed reminisce. The words on this album may be some of the finest you ever hear,  let alone this year. In Michael Ainsley we have that rare thing – a songwriter who writes pure poetry.

I Think About You Always and its poignant lyrics are lifted by the rare appearance of a full backing band and boisterous vocals which makes it sound like great fun and one of the many album highlights.

Dry Tongue is heart breaking and crying out for a full orchestral accompaniment, or maybe that would be too predictable, the piano only backing is perfect. If you take time to listen to the words you may see the similarity with the aforementioned lyricist, Morrissey. These Failures could be put to a Marr guitar riff quite easily with Stephen pouring out every emotion and feeling.

Torn Photograph (Idiot) has shouting chorus vocals over an acoustic guitar “it’s fair enough, avoid me at all costs……I’m better off being dead, put a bullet in my head”. It’s acoustic post punk at its finest and on Letter Let Her Go the true beauty of Ainsley’s lyrics shines through and most blokes could relate to it in their hour of selfish self pitying sorrow.

Special mention also to Stuck In Freefall which rises and rises to a quite brilliant crescendo and has some very fitting production. Today’s earworm.

At less than thirty minutes 5-4-3-2 She’s Not The One is short, but just short enough. It’s a wonderful example of quality over quantity and deserves your attention pronto.