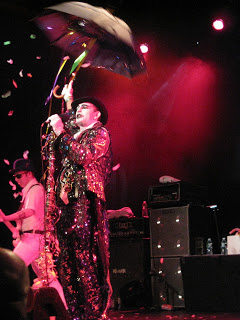 The Adicts came out of the second wave of punk with their Clockwork Orange sinister clown take on the form. They have have become one of the big underground bands in the USA and their live show is a huge spectacle, reports Carrie Quartly.

I was excited to see The Adicts in New York after being frustrated by the rarity of non-festival appearances in their native UK and missing them late last year as their Rebellion set clashed with a Captain Sensible solo performance, so eagerly purchased tickets when they went on sale earlier in March.

The venue, formerly The Roxy, is now a Best Buy Theater, and it’s a strange, sterilised place with lighted escalators, a mandatory $3 bag check-in cloakroom, and big burly door staff on a position of authority power trip (I watched as one girl was told she could not stand in a specific spot, and was brusquely directed instead to move a mere 3 inches away). There was even a long table where the contents of people’s bags were being picked through and analysed by security. It reminded me of an airport.

The doors opened at 7, and the first band, Eva & Her Virgins, didn’t come on until nearly 9. When they finally strutted on stage, it was clear what the delay was, they were obviously too busy getting dressed.

The blonde haired singer stomped around on spike heeled boots festooned with glittering chains, her purple corseted ball gown pushing her ample bust up to her eyeballs. She sprawled around the stage in overt masturbatory poses, and repeatedly flashed the audience, hiking the short hem of her dress up over her ripped fence net tights. The guys were shirtless with dog tags slung around their necks, or wearing sleeveless hoodies draped with the obligatory emo chains. A flimsy keyboard burble squeezed out like a sofa fart, and was abruptly smothered by generic chugging guitar riffs, while the singer shrieked and strangulated herself with the microphone cable, which unfortunately failed to muffle her tuneless croaks. Just when I thought it couldn’t get any worse, another trendy looking twit with a bad haircut and a septum piercing was brought out for some guest rap verses. If there’s one thing I hate, its shitty rap rock fusion acts who can’t even tackle one style of music competently, never mind successfully combining the two.

I suppose they’d like to think of themselves as dark electronic pop with a theatrical edge, but it played out like an embarrassing, desperate pantomime of nu-metal posturing. Little plastic dolls all dressed up in their alternative clothes. I scowled through the entire set.

2nd band World Inferno aka “World/Inferno Friendship Society”, aka “The Inferno” (another local band from Brooklyn) took the stage next, an ambitious multi-instrumentalist ensemble of sharp dressers blending styles of punk, soul, jazz, klezmer, cabaret and ska. Front man Jack Terricloth proved to be a charismatic performer, cavorting about the stage with a twinkle in his eye as the several backing members (including a viola and an alto sax player) plugged away behind him with devilish abandon. “Who’s your favourite dead punk rocker?”, he asked the fans before ripping into Poor Old Jeffrey Lee, “Everybody’s got one.”

Their confidence and command of the stage was welcome after the woeful disaster of the first band, although the crowd became particularly aggressive throughout – punches were thrown, I endured the constant digging of elbows in my back, and some beer was spat into my fringe by a girl coveting my spot by the barrier (I don’t give in that easily!), all considerably distracting! Another annoyance was the relentless crowd surfing, several times I had to dodge pairs of Converse boots as they swung towards my face when some attention seeking moron (often the same person again and again) was hauled over the barrier by event personnel. We were also regularly having water bottles emptied over our heads without consent, which made me feel a bit like an animal being hosed down in a pen (and didn’t do my leather jacket any favours, either).

The mood visibly changed for the better when the Clockwork Orange intro boomed out from behind the closed curtain – the people behind me were bouncing with excitement rather than through motives of attempted GBH. The curtains parted to reveal the brother droogs in their white jumpsuits and bowlers, announcing their intentions of fun with a violin instrumental version of œOde To joy.

For opening number œJoker In the Pack, they were soon joined by Monkey, resplendent in full joker makeup, glittered trousers and matching oversized mad hatter top hat. Great salvos of confetti were tipped out from boxes, and Monkey stalked the stage, pulling long multi-coloured paper streamers out of his mouth and nonchalantly tossing decks of playing cards about. Despite technical issues for the always entertaining guitarist Pete Dee at the start, his buoyant spirit never dampened and he soldiered on with a plucky smile.

Tango saw Monkey armed with a large umbrella, re-enacting the dance steps, crossing one foot in front of the other with a playful grin. The umbrella then sprang open, hurling showers of sparkling confetti all over the stage. Throughout the evening a series of similar outlandish props were employed, Monkey’s microphone stand was a spangly orgy of streamers. He wore a giant inflatable Elvis wig and flashing LED glasses during Crazy, which were then discarded into the audience. He flung soft toys and sock monkeys and unraveled long colourful streamers at the eager throng of fans who did their best to catch them.

When he disappeared for a wardrobe change, he returned in a checkerboard sequined jacket all done up with string lights, flashing like a Christmas tree. He even drank out of a glass that flashed in a sequence of changing colours in-between songs. He sweated through infinite layers of garishly patterned outfits (shiney, shiney) and emptied an entire can of silly string into drummer Michael ‘Kid Dee’ Davison’s face, while a bubble machine unleashed a flurry of hundreds of little bubbles into the air. These wacky antics are the perfect backdrop to The Adicts brand of up-tempo, catchy anthems and high energy punk-pop.

The set covered most of the high points of their lengthy career, from the boot boy days of their 1979 Lunch With the Adicts EP (œEasy Way Out), to 80’s synth pop driven hits from third album Smart Alex (œTroubadour), and a couple from early 90’s comeback Twenty-Seven (Angel and Fuck It Up, the latter giving Monkey the excuse to flip his middle finger out at the audience in time to the beat).

Chinese Takeaway became an extended rallying chant, with the audience spiritedly joining in on the “woo woo woo!” chorus. Other highlights were Monkey’s mime theatre act for Too Young, the wickedly absurd Steamroller, and a fist-pumpingly anthemic Viva La Revolution which made me want to storm the Bastille. “It’s almost midnight in Times Square in New York City.”, Monkey declared as more confetti tubes exploded on the far right of the stage. “This is better than New Year’s Eve, isn’t it?!” Yes, Monkey, indeed it is.

The set closed with the band’s biggest hit and firm fan favourite, the enduring and endearing Bad Boy. The crowd swayed and sang along and bumped big beach balls around the room as if in a giant gumball machine.
This was only the second time I’ve seen them live, but it seems an Adicts gig is guaranteed to be a dazzling circus of fun, and with an act that’s over thirty years old, perhaps also the secret to why they have aged so much better than a lot of their crusty punk peers. VIVA!