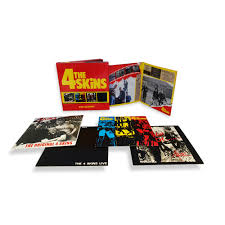 The 4 Skins – The Albums

4CD set bringing together most everything recorded by the Oi! legends, including the albums The Good The Bad And The 4 Skins, A Fistful of… and From Chaos To 1984, plus a whole disc corralling all the original line-up’s waxings and demos…….Ian Canty dons the boots and braces once more……

The pivotal figure in the 4 Skins’ story was “Hoxton” Tom McCourt, the original guitarist with the band before moving over to bass. Always a dapperly clad chap, McCourt was the only consistent member of the band right up until the final line-up split in 1984. He was one of the Punks featured on the sleeve of the Clash City Rockers single, but towards the end of 1977 he began to don a more skinhead-style garb, the fashion of which was experiencing a revival on the back of Punk. The Cockney Rejects played a key part in drawing together the various members that would make up the initial grouping of the band that played on the Oi The Album tracks Wonderful World and Chaos. Steve H Harmer was part of the Rejects road crew and he and Hoxton Tom were joined by two Gary’s, Hitchcock (on drums, soon to become the band’s manager) and Hodges (the vocalist). Micky Geggus played guitar on Wonderful World too.

The reception to these two pieces of brutal Punk Rock was positive so the band were reshaped on a more permanent footing, with the multi-talented John Jacobs coming in on drums and Rockabilly Steve Pear taking on the guitar role. The first disc of this boxset more than adequately displays what a formidable force this grouping were. It features all their contributions to the Oi albums, a rough and ready version of their lost classic Clockwork Skinhead I hadn’t heard before (plus a take I was aware of), the excellent One Law For Them single and various live and demos offerings. The live material is a bit iffy sound-wise, it has to be there for completion’s sake though, but the demos are pretty good recordings that show the 4 Skins’ early strengths well.

There is also a good radio session cut for the BBC (with keyboards!) that was due to be featured on the John Peel show before being dropped after the disastrous Hamborough Tavern gig, which ended in a riot and ultimately the dissolution of this line-up. The session, coupled with live material from the Bridge House and Deuragon plus a Wonderful World recut by Roi’s current band (not included on this set), made up the previously released Secret Life Of The 4 Skins collection issued in the early 21st century.

Losing both a singer and a guitarist would have been a mortal blow for most bands, but the 4 Skins bounced back with the adaptable Jacobs moving to guitar with drummer Pete Abbot and singer Tony “Panther” Cummings joining. Their first act was to record a cover of Slade’s Merry Christmas Everybody for the Bollocks To Xmas Oi EP in the yule of 1981. This version of the band would record their debut album The Good The Bad And The 4 Skins, which managed to crack the top 100 of the UK charts. It is included here in its entirety and for me, while it is a decent enough effort, Panther’s vocals don’t really suit the band’s style. I can’t really put my finger on why, it just doesn’t work for some reason. I suppose they don’t sound quite as fierce as the early 4 Skins.

The album was split into studio and live sides – I think the live stuff was a way of getting round including the old material without having to licence it from EMI etc. It was apparently one of those “live in the studio” things that a lot of Oi! bands seemed to favour (it states as much in the sleeve notes). One thing puzzles me though – if that is the case why was there the confrontation with the crowd after I Don’t Wanna Die? Was is staged or did some “invited guests” play up? I guess we will never know.

The studio stuff works a little better, with Jack The Lad being a good shout-along number, Jealousy being an older song done well and Justice, effectively a re-boot of Clockwork Skinhead, having some good guitar and a bellowing hook-line. A Ska number with a hint of Minder, Plastic Gangster, could have offered them a way out with a freak hit, but with Two Tone already just a memory in the charts it never happened despite it being a catchy enough tune. Perhaps it could have worked as a double A-side with their version of Dambusters, put together single-handedly by Jacobs for the Carry On Oi! comp under the JJ Allstars moniker?

Added to the album itself here is the underwhelming Yesterday’s Hero single (the vocals being awash with echo make it sound a trifle odd) along with the final Low Life/Bread Or Blood 7″ inch which was a distinct improvement. The projected pairing of Norman/Seems To Me also isn’t bad, though Secret going under scuppered it the Reggae influence of the flipside fit the singer’s voice better. After losing their record label, this version of the band pulled up the shutters.

Though many would have thrown in the towel for good at this point McCourt gathered together a new line up, led this time by Roi Pearce, the ex-Last Resort singer. This was an astute choice as Pearce had just the kind of voice to fit the 4 Skins’ material and was always someone who could come up with a smart line or two of verse. Ground had been lost though, but from these unfavourable circumstances, the 4 Skins made the best album of their career. The one thing that marks this record out as special is that it almost continually features interesting lyrical themes, shying away from the old “boots and braces on his feet, he’s a skinhead he’s on the street” type clichés. It even has a 60s Soul-infused instrumental The Spy From Alaska (named after the studio where the LP was recorded and not so surprising as Tom was a noted Soul buff).

Forgotten Hero has always been a favourite of mine, a human and thoughtful character piece about how a ex-soldier’s lonely life in old age. At the other end of the scale, Five More Years (subtitled here Layabouts Anthem, though I can’t recall that being the case back then) is a hilarious turnabout of the Punk “Right To Work” ideal. There’s concern and just plain good advice for runaways tempted by the capital’s bright lights on Johnny Go Home and H.M.P. realistically paints a picture of life in clink. At a time when the UK Punk scene was disintegrating, this was a perceptive and lively compendium.

This third aggregation of the band contributed the great On The Streets, their riposte to Anarcho Punk, on the Son Of Oi! album (a record I have to admit I am not entirely unfamiliar with!). They also recorded the From Chaos To 1984 LP, another live in the studio affair, featuring the then current line-up playing tracks from across the 4 Skins whole career. Roi slightly undermines the songs with his stage announcements, but the album itself is a pretty good summary of the then-current band’s strengths.

After the band folded for good in 1984 McCourt has shied away from any 4 Skins reunion, saying that they were about youth and if they were to come back now it would make it a nostalgia trip, like when the Teddy Boys came back at the height of Punk. He had maintained his dignity throughout at what must have been at times a dispiriting affair, particularly when he probably just wanted to play live with the band without having 101 questions thrown his way each time. In 2017 he was made Strategic Director the London Borough of Tower Hamlets, so all things considered, fair play Tom! Of the other former members, Roi fronts a new line up of the Last Resort and has been know to play a few old 4 Skins songs with them and John Jacobs has done session work with a variety of artists including Graham Parker.

The 4 Skins – The Albums doesn’t feature a great deal of truly rare material, but there are one or two things I either haven’t heard for a while or indeed at all. The first disc has some great stuff on it and gives us a glimpse of what they might have achieved without the events that unfortunately unfolded around them. The Good The Bad And The 4 Skins isn’t as satisfying and seems a bit of a half measure, but they got back to form with a vengeance with the fine Fistful Of…. LP. The live disc is ok, but you’re not going to listen to many of the tracks on here over the originals, but it had to be here on something billed as a one stop shop for the 4 Skins’ work.

This boxset contains some of the most blistering and savage pieces that 80s UK Punk had to offer. The 4 Skins were genuinely thrilling at the earliest point of their career and later produced a very good and in turns compassionate, well-observed and funny LP when nobody probably thought they had it in them. It was usually a pretty bleak picture they painted, but in terms of raw anger, they took some beating.