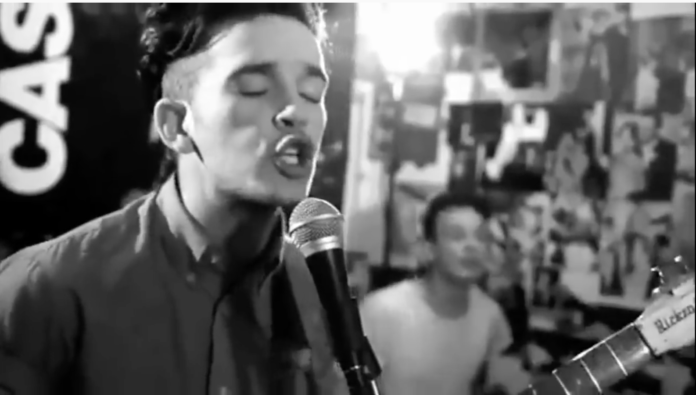 ‘In 2012, before they had released anything, The 1975 were an interesting new proposition on the Manchester music scene. They felt like they were a new way of thinking and a lot different from the Manchester canon and history. Their embrace of post punk, ambient band American R’n B was fascinating.  This intrigued me and also the obvious eloquence of Matt Healey and his intelligence and punk rock way of approaching their art without any of the cliches of punk rock itself was interesting.  This is my interview with the young Matt Healey. One of the very first interviews he did.’ John Robb

The 1975 are a new Manchester band who are making a mark by coming out of the city with no hook into any of the prevalent pro or anti Manchester music scenes.

They make a highly original sound all of their own flecked with a very slight nod to R n B and atmospherics but still fitting into indie music with a nod towards something darker and more atmospheric and almost stadium melancholy.

Basically, when I was about 19, I went on a trip to the northern part of Majorca. I was in a huge group of friends and family, so I hadn’t gone out there to ‘find myself’ or anything studenty like that. It was just like, a nice holiday. I went on loads of long walks, which for me is very out of character – but places like that are so removed from my day to day surroundings, it seemed that i wanted to be ‘inspired’ by them in loads of different ways all at once.

Anyway, it was on one of these walks that I came across a house – it was a beautiful Spanish villa that had, what seemed to be, all of it’s furniture outside. Just to make this story more of an idealistic cliche – a gramophone poised at the front window smoothly crooned Bob Dylans ‘Corrina, Corrina’ as I (by this point) stumbled into view. On a deckchair, in the porch, sat this artist. I won’t name him because he’s one of them hippy blokes who would probably be adverse to the idea of having an actual identity. But we sparked up a conversation and I ended up staying there all day. He showed me around his house – it was like some kind of 60’s bizarre, an authentic vintage haberdashery. Original Beatles records, signed Elvis shit, a photo of him with Hendrix.

After I’d fallen in love with him, he showed me his ‘library that was rammed full of priced books. Turns out over the years his library had been the place you went to acquire a good read. It was here that he gave me all of that beat generation literature I’ve mentioned before. I left him with the loving intention of returning to see him someday (something I still intend on doing). I didn’t start reading any of it until probably about 6 months later. But when i did eventually read it, I found that mental page of scribblings. It wasn’t really disturbing or dark, i think because it was so SO mad I couldn’t quite make out whether it was suicidal or totally life affirming. The important thing, and really the only thing, that stuck with me was that the page was dated

At the time I just thought that the word ‘The’ preceding a date was a strange use of language. I never thought that it would be something that would later come to be so important. When it came to naming the band, it was perfect and somehow seemed correct…

2. You have a wonderful DIY ethic buy yet sound very pop – recording in the bedroom, friends making videos- is this accident or design

Well the bedroom recordings are kind of a natural evolution. We’re all quite technically savvy – in one way or another. George (drums) produces the demos with me in my room for example. He’s grown to have a very interesting ear for production. I think because we’ve all been together for so many years as friends, we find that the best people to ‘produce, direct’ our band is ourselves. I think the pop sensibility comes from our combined love of great songs. It’s not something we go out of our way to do, for us it’s more about the importance of how our music connects with the listener.

Our videos are directed by our mate James Booth. And the same rule applies to our videos as it does our records. James has been person for the job, because he’s so close to us. We’ve just been quite lucky that he’s also incredibly talented.

Yeah I imagine it does. But saying that, I wouldn’t like to promote the assumption that all music born out of Manchester is just a tribalist yearning for the a particular decade. There is and always has been really relevant music coming out of Manchester. I think the main thing with our band is that we don’t wear the ‘Manc band’ badge of honour. Our geographical location has never seemed very relevant or inspiring to us. We don’t really like the idea of being judged on the city we’re from – or the idea anyone being judged for that reason to be honest.

I think if you are at the forefront of a cultural movement – like Oasis and The Stone Roses were – then your identity as people is as important to the whole package as the songs are, and that’s really cool. But we’re not those bands. We’re The 1975. And we’d much prefer to create our own world as apposed to being harboured by a localised ideal. Manchester has got enough heroes.

4. I love this quote of yours ‘I reckon timeless music is created by people that are no€™t thinking about time.’ explain!

Well, our society is obsessed with time. The idea of decades in particular. We like everything to fit into our predetermined timeline of what we know and expect. It makes things easier to digest and helps us see cultural movements as ‘that time’. It’s an innate part of being a human, everyone does it, and it’s because we’re brought up around the same media outlets.We have the feeling that the present is the only instant of time that actually exists. The past is a shadowy memory. The future a vague uncertainty – so understandably, in the hands of the media (and us lot), cultural history becomes a total antiquated ideal. For safety. That’s why you get shit art.

I think the people who understand this tradition and fight against it are the ones who create truly ‘timeless’ music.

5. There’s a lot of space in your music- are you fans of ambient music?

Very much so. Ambient music and everything surrounding it kind of took up my life for a while. I was very into it. I still am. I could have quoted you thousands of obscure ambient bands and artists at that time – it seemed to get really popular amongst my ‘scene’ around 2007. Boards of Canada, Sigur Ros, Four Tet, they were some of the big names along with Eno of course. The reason for my love of ambient music will always be the same – it’s the fact that it can command you how to feel, without the use of language. It’s a beautiful and exciting idea – and it’s something I have tried to explore a lot as a musician.

Ambient music is where I found my feet as a producer – and it’s somewhere i got wonderfully lost as a songwriter.