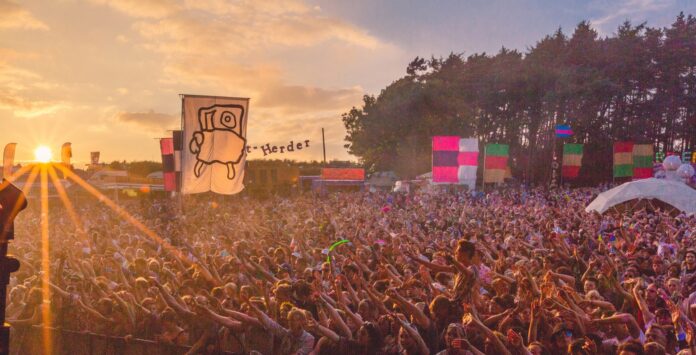 The DIY lovebomb that is Beat-Herder Festival turns 10 this week, and still has a special hold over anyone who attends.

In the 10 years I’ve been a devotee, I’ve met people who have planned babies round it, people who have spent a full 12 months making their fancy dress costumes, and people who have never danced before in their lives and have chosen front centre at the Beat-Herder main stage to start.

My favourite convert was a musician from a miserablist indie band who had played countless festivals around the world and was nonplussed at being dragged to Beat-Herder in his spare time by his new girlfriend. Within two hours he was covered in glitter and screaming with joy. He hasn’t been the same since.

The only time I’ve even nearly missed Beat-Herder was a few years ago after missing a coach back from London on the Saturday night, having seen a band I love who only visit the UK about once every four years.

We slept badly on the floor of Victoria coach station and got on the first available bus the next morning, heading straight to the festival site without even the most basic of prep, shaky and tense the whole way.

It was only once the familiar sheep doodle was in sight that I realised how relieved I felt to be there, to top ourselves up with whatever is in the air there that gets us all through the rest of the year.

To celebrate the 10th birthday of this very silly place, here are my top 10 favourite things about Beat-Herder. Feel free to add your own in the comments…

In an unusual and popular move, Beat-Herder has a few regular acts you can expect to see almost every year.

These familiar faces are the closest a lot of us get to the man behind the curtain, and they’re a good barometer of what the festival is all about.

Comedy degenerate Captain Hotknives plays Yorkshire folk songs to the Beat-Herder and District Working Men’s Club every year, packing it out with singalongs that range from a bit inappropriate to totally inappropriate.

And the only thing that consoled the crowd the first time The Lancashire Hotpots weren’t able to make their regular main stage appearance was Mr Motivator replacing them. 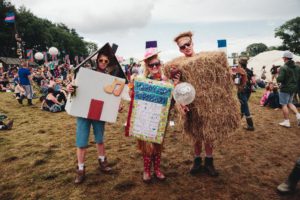 Each year the theme is different, and in recent years we’ve been working our way letter-by-letter through the words ‘Beat-Herder’.

The efforts people go to are admirable, and fall into either intimidatingly impressive or comically crap, both equally entertaining.

The letter ‘A’ saw plenty of animals wandering the site, with one Ace Ventura taking it upon himself to round them up and march them to the church where Noah was waiting to usher them inside.

During the ‘B’ year, a similar scenario ensued, with anyone who was dressed as a bee (of which there were many) being chased around by one determined beekeeper.

This year we’re on ‘E’ for the second time, and I’m still waiting to see something that will beat the man who turned up as an Excel spreadsheet last time. 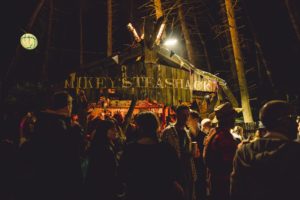 Back before there was a main stage, and then back some more, there was Mikey’s Tea Shack.

We’re not sure who Mikey is, but his mugs of tea and brownies have been sustaining woodland dancers at all hours for at least the past 10 years, and possibly sustaining dancing dinosaurs before that. 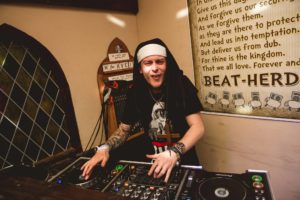 Like so many bits of Beat-Herder, the Church was a mischievous addition one year that we immediately took to our hearts.

Complete with raving choristers, the Sunday Service pulls in an improbable number of people to dance and sing along from hymn books to the finest pop tunes of the past few decades, with the fervour of a Gospel choir. 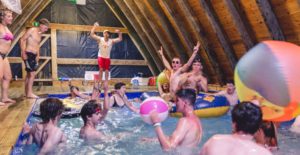 Back in the early days of the festival, there was a thing known unofficially as ‘The Grandad Room’, which could be reached only by crawling on your hands and knees through a dirt tunnel.

The Grandad Room had flock wallpaper and a disused fireplace which held black and white family photos. Visitors could sit on battered armchairs and watch an ancient TV showing Coronation Street on a loop.

In subsequent years, the hidden elements of the festival have come to include a tunnel from a phone box that leads explorers to a mystery pop-up location, a swimming pool, and a tiny club with a light-up dancefloor.

Where other festivals might shout about these bonus spots and point them out with signs from all over the site, Beat-Herder prefers it if you really earn the experience by exploring until you stumble upon them. 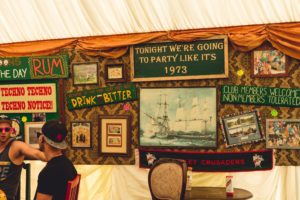 One of the first tents at Beat-Herder, and a world all of its own. While the rest of the festival is playing the cuttingest edgest of stuff, the Working Men’s Club Tent is unashamedly hosting the cheesiest and silliest.

Just remember to say neigh to rave, and please do not look at the beer mats. 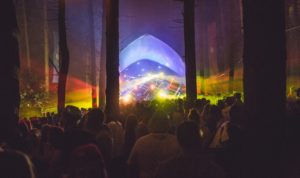 If you picked this festival up and moved it anywhere else, it just wouldn’t be the same. Not a lot of festivals can say that about their designated field.

A lot of more recent Beat-Herder attendees might not know much about the festival’s beginnings, but it’s the stuff of legend. A small crew who liked to have parties in the middle of nowhere for their friends stumbled upon a bit of woodland due for destruction, and had a party so successful that keeping the trees and turning the event into a full-on festival was the only sensible thing to do.

From a modest single stage and a couple of plain tents to the wondrous world that awaits us this year, Beat-Herder has grown from a tiny one-night social gathering to one of the finest festivals on the planet.

This has also meant that it doesn’t now need to make way for a huge car boot sale the next morning, although it’s a shame there’s nowhere to buy board games with the change from Mikey’s Tea Shack anymore. 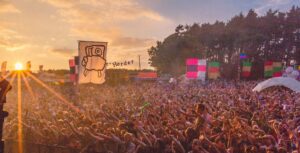 Whether the festival brings a lot of like-minded, funny and friendly (mostly) Northerners out of the woodwork, or whether it just transforms anyone who attends, we’re still not sure.

But the end result is the same: a party atmosphere, 24 hours a day, from the wide-eyed 3am woodland dancers to the hungover 3pm churchgoers, cut a Beat-Herder attendee and they bleed pure joy.

And the number one best thing about Beat-Herder…

For a festival to last ten years and grow to an attendance of around 15,000 with no major sponsorship is an incredible achievement as well as a ridiculous amount of hard work, and it couldn’t have happened without the tenacity of a crew motivated by something other than cash.

The team who launched Beat-Herder 10 years ago are the same people who still run around the site picking up litter, fixing things and making sure everyone’s having fun.

When they’re not spending all their time thinking about all the little details they can bring to the festival each year that will continue to surprise and delight us, they’re putting on other events in Yorkshire purely for the love of it.

This doesn’t only apply to the festival founders, but to countless people who build stuff, stage manage, DJ and run stalls and bars on site. The chances are that anyone you see working at Beat-Herder regularly gives their time to DIY events the whole year round, motivated by the love of showing you a good time.

If the business of partying had an annual conference, Beat-Herder would be it.