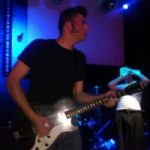 After 24 hours of the pre gig panic ”Ëœof will they or won’t they show’ following the promoter’s last minute cancellation, Th’ Legendary Shakers Shakers demolished Brighton’s Haunt: JD and the boys dismantled the venue brick by brick, song by song.

Stepping in to take over proceedings, Buzz From Punker Bunker used his speed and experience to salvage the event. Somebody buy this man a red cape. Additionally, the relentless Facebooking from support act the Devil Wrays and the online social networking of Shack Shaker’s fans spreading the word, won them a sturdy turnout despite scant promotion.

The Devil Wrays turned in an impressively morose performance. They pummel well-aimed body jabs of knuckle-duster fisted psychobilly, with a sound that cares little for finesse, or the nicety of un-warranted musical confection. The band gets tighter, leaner, meaner and better with each show.

Guitars slung-low, quiffed and greased up and with a fine collection of tattoos between them, each song went off like a spitefully chucked hand grenade into the audience.

The Devil Wrays closed with Valley of the Dead, its deceptively melancholic and tremelo soaked opening fades out into a pile driver of a riff that’s underpinned by Jimbo and Dom’s sledgehammer rhythms.

One well-earned encore, they left the stage for the main draw to step up having laid groundwork for the impending sonic destruction.

The Shack Shakers effortlessly live up to their self-proclaimed legendary status, their intimidating stage presence and sheer velocity of sound makes lesser bands look dull-witted, lazy and pedestrian. They fucking destroyed the place.

Their set is a southern state carnie revue, of roughneck country, blues getting brutal, gypsy folk and every known ”Ëœbilly’ genre in existence; barbed together by rigid polka metronomes and rolling riffs that rise from their cultural swamp like a particularly pernicious miasma.

The Colonel JD Wilkes evidently had some demons to exercise tonight, an edgy ginger runt stalking the stage with a worrying air of unpredictability, he sang and blew into his mouth-harp as if he was choking on ectoplasm.

In full-on preacher mode, getting bent double on invocation, he got creative with his mucus, contorted playfully and enjoyed the odd genital massage when his hand traveled deep-south.

Affectionately confrontational, he baptised one front row punter with swift microphone smack to his head; the beautiful smile that broke out across this poor fucker’s face was a thing to behold.

Long-term sidekick Mark Robertson on stand-up bass with two newbies on guitar and drums were as tight as the proverbial, barely ceasing between an enviable body of songs and slamming through old favorites like Ichabod and CB Song.

Had this night not gone ahead, Brighton punters would have been woefully robbed, all praise given to those who made it happen and amen.