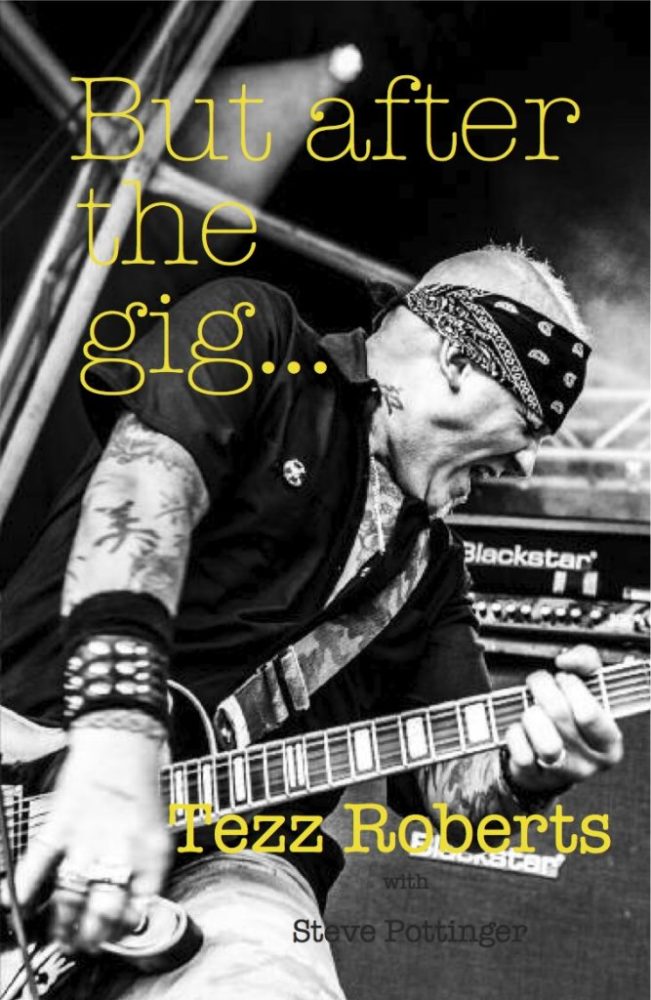 It’s said that cockroaches are the living creatures that stand the best chance of surviving the horrors of a nuclear holocaust. After reading “But After the Gig”, it’s tempting to think the same of Tezz Roberts such is his barnacle-like grip on existence in the face of a range of cataclysmic challenges, almost all of his own making.
Tezz Roberts has played a variety of drums, bass, guitar and also taken lead vocals in a host of bands including Discharge, U.K. Subs, Breaking Bones, Ministry and The Business. He is responsible for the D-Beat, a template based on his drumming style that pretty much informs most hardcore music to this day, and musically is far more important than he would lay claim to. To say he has been there, seen that and done it would be a ludicrous understatement; his life is very much the final word in most possible situations, Rock ‘n’ Roll or other, and his autobiography, beautifully and at times hilariously scribed by the ever-diligent Steve Pottinger, is a white-knuckle descent in and out of Hell, and then back in again, quite a few times.
As a sixteen-year-old dyslexic with bronchitis in Stoke on Trent, Tezz Roberts stood on the threshold of life with no job and no particular future in mind. However, like many others in the late-70’s dole queues, he was inspired by Punk and, from having no real interest in being a musician, his future was written. Having formed Discharge, at the time the definitive market leaders in a certain type of Punk sound, you would think he would be content to ride the wave but an inability to stay in one place sees him leave.
The fractious relationship with his brother, Bones, leads to a fight in which Tezz stabs him in the family kitchen, puncturing a lung. This does not stop them forming a band together, Broken Bones with Tezz now on bass, nor does it diminish a theme throughout the book that hints at a desire for approval from his brother that is not forthcoming. However, as soon as Broken Bones seems to be getting somewhere, he ups and leaves. Just like the proverbial cat though, he lands on his feet and gets the gig as first bassist, then guitarist in none other than the UK Subs. A dream job in many ways, but not enough to prevent the self-destruct button being pressed and a disagreement with the management during a US tour sees Tezz left to find his own way home.
Another short but promising stint with Broken Bones sees Tezz decide to start a new life in the States, apparently just on a whim. Incredibly, he lands a job in Ministry and life seems great until, on a particularly drink-fuelled evening during the Lollapalooza tour, he decides it’s a good idea to set off an enormous firework on the tour bus which, unsurprisingly, brings that episode to a close. To say that from this point, life spirals out of control for Tezz, would be to imply that he was ever in control before that, which readers must make their own minds up about. It can be said with certainty though, that after this point, the book makes much less comfortable reading.
A succession of ill-advised affairs, decisions and addictions combine to create a vicious downward spiral that see Tezz homeless, bankrupt and finally imprisoned in the US. If this was a novel, you would expect the author to offer the lead character some redemption at some stage but, with Tezz Roberts, a horrendous situation gets worse and then drops off a cliff. If it’s possible to read peering from behind a cushion, you will be.
Unlike Pottinger’s brilliant work with Ross Lomas in which a belated ASD diagnosis puts earlier events into a context we can understand, no such revelatory moment emerges with Tezz. However, late in the book he does muse over the motivations that have driven him through the years but, like so many other issues throughout this gripping narrative, ultimately you feel he’s not that bothered.
Interspersed with contributions from those who know him best, Tezz Roberts and Steve Pottinger have produced a compulsive read, and one that you won’t easily forget. It’s a no- holds-barred tale of music, life on the road but ultimately survival.

But After the Gig is available from Ignite Books