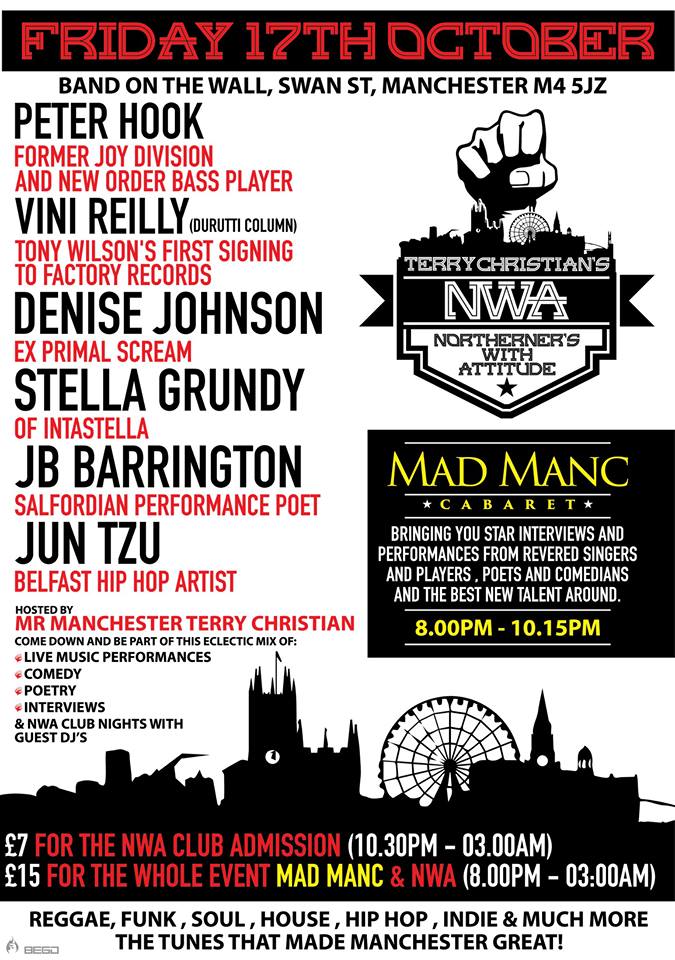 Terry Christian has announced a music and in conversation event in Manchester for this weekend, Friday Oct 17th.

It will join Louder Than Words as the key in conversation event in the city of Manchester.

The line up includes

Tickets are available from here

Award winning TV and radio presenter and supermanc Terry Christian presents the Mad Manc Cabaret.
With interviews and live performances from poets, comedians, musicians in a no holds bar show that’s as Mancunian as waiting for a bus in the rain.
It will be The Word, but live on stage, in Manchester.
Terry will be joined by:
Ex-Primal scream and A Certain Ratio Singer, Denise Johnson, performing live and spilling the beans on life on the road with the Scots rockers.
Stella Grundy of Intastella fame, performing songs from her one woman musical play ‘Rise & Fall Of A Northern Star’.
The Salfordian performance poet hailed as the new John Cooper Clarke, JB Barrington AKA ‘Words Escape Me’.
Belfast hip hop artist and soul rebel, Jun Tzu who’ll be performing a couple of numbers from his new album ‘The Troubles’.
Former Joy Division and New Order bass player Peter Hook, talking about the Halcyon days of Manchester music from punk through to The Hacienda and its ongoing worldwide influence.
And the Durutti Column’s Vini Reilly. Tony Wilson’s first signing to Factory Records, he counts Pete Townshend Of The Who, Brian May Of Queen and Brian Eno amongst his biggest fans. Vini will be playing live and talking about his incredible journey in music.