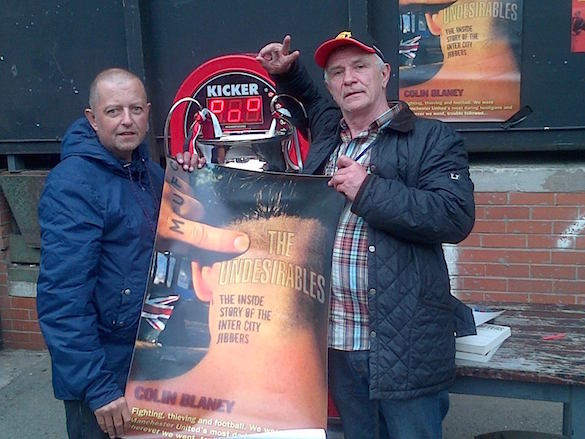 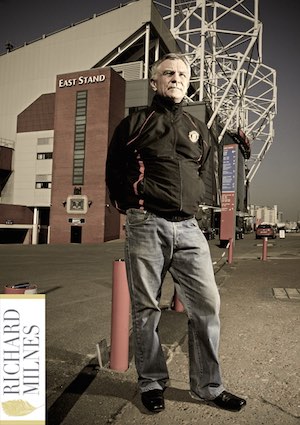 As a man who knows his football better than most Louder Than War asked Colin to pick out some of his own favourite terrace songs from the 60s and upwards.

His picks range from The Clash’s ‘White Riot’ to the comedy skit Monty Python song ‘Spam’. Colin explains how these hit songs became terrace anthems for himself and the U.T.D. faithful.

If you’re interested in Colin Blaney you may also like to check out the interview Carl Stanley did for us with him.

Everything below in quote marks is by Colin…

1. “The first tune I ever sang on the terraces from the charts was The Beatles with ‘Yellow Submarine’ which we’d change to ‘we all live in a red submarine”

2) “Early 70’s were the Slade days and UTD would sing…’Come On feel the noise, then meet the boys, well go Wild Wild Wild’ etc etc…” 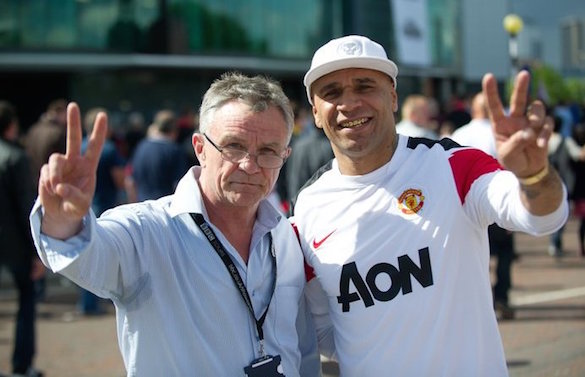 3) “Gary Glitters ‘Hello Hello, I’m back Again’ with us belting out “Its good to be back, good to be back hello, hello” when UTD came back up from the second division”

4) “Then you got the punk days and ‘Police and Thief’s’ by The Clash. It really was something else as it sent us all into a madness zone with both the punks and perry boys po-going to it after the games, on the trains and in the grounds. And also when we’d steam into the first mob of rival fans we’d come across.”

5) “Tell you another big tune with the UTD lads was Thin Lizzy’s ‘The Boys are Back in Town’, especially when we played away and would be drinking in the oppositions battle cruisers”

6) “I remember 808 States ‘Pacific State‘ being big around 89 and hearing it being played in the Stretford End at UTD v Forest in the FA Cup.”

7) “Got to include this, 1991 in Rotterdam we sang Monty Pythons ‘Always look on the red side of life’ etc…”

8) “Another tune from the punk era was ‘White Riot’ by The Clash, but we’d be singing “red riot, we wanna riot, red riot a riot of our own” like we did when we steamed into the North Bank in 77″.

9) “Bad Moon Rising by Credence Clearwater Revival which would go ” I hear The Stretford Ends a rising, I hear there’s trouble on the way, so don’t go out tonight unless your red and white, there’s a bad moon on the rise”. Its still sung by UTD today when we play City.”

10) “Monty Python again with ‘Spam Spam Spam’. We sang this when about 2000 inner-core lads left the Stretford End as the away fans were just appearing in the Scoreboard paddock around 75-76. We took over that end as well and next door in the corner of the scoreboard, away fans would come with more police around them so we’d sing songs that made them shudder. I swear it was so loud the wooden flooring started to bounce up and down. It was a mad song to sing and would really weird them out and made us laugh our tits off as we’d sing it after the game in the pubs, mega days…MUFC OK”

Buy a copy of Colin Blaney’s new book ‘The Undesirables’ on Amazon by clicking THIS LINK.