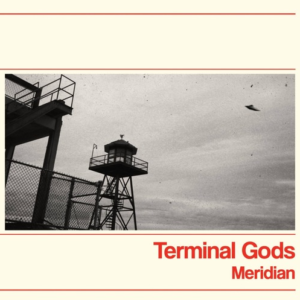 Louder than War’s Ioan Humphreys gets a listen to the latest long player offering from the fantastic Terminal Gods.

Terminal Gods are a London-based post-punk four piece. August 25th saw their latest LP Meridian released via the band’s own Heavy Leather label. Since forming in 2011, the bands have self-released countless singles and EPs culminating in the release of their celebrated debut album Wave/Form last year.

Ominous church organ starts this eight track LP from these goth Londoners. The perfectly enunciated lyrics and crisp vocals of The Bird Catcher come in and the throbbing John Carpenter-esque electronica creep into the subconsciousness. The track is slow and full of dread and immediately evokes comparisons of early Depeche Mode.

Follow up Crater is a more upbeat offering with minimal percussion, an infectious repetitive keyboard riff and expansive guitars. The band seem to be channeling Bauhaus via The Sisters of Mercy with lead singer Robert Cowlin the baritone preacher exercising caution and common sense amid the 21st century chaos and dread.

Sleep Machine is one of the stand out tracks of the LP and again is a more upbeat affair albeit with a heavy electronica baseline and shimmering keyboards. Again the guitars are BIG and expansive and the refrain of “sleep machine, don’t wake me” is sung as innocently as it is baleful. I want to Believe is 2.47 minutes of slow burning instrumental pulsating beat that is steeped in electronica and sci-fi pop culture references that act like an aural cement for the album. You start to get the feeling of where this band is coming from!

Moral Crusade is another stand out track on this LP with its heavy electronic disco throb and the brilliantly sampled ‘Moral Crusade’ speech from Tony Benn at the 1982 Labour Party Conference. Suddenly Terminal Gods’ output takes a sociopolitical turn that for me makes this LP far more interesting. The sample is used perfectly and sympathetically and the final effect is very powerful and stays with the listener long after. Great stuff.

A pulsating insistent bass and a thick electronica forms the basis of Interplay. The drum claps and the again the expansive guitar give the track such an epic sound. Cowlin’s vocals are strained and at their most evocative when he sings “I am here, I am here”. The final title track is another slow burner which turns into a really atmospheric instrumental that evokes the feeling of film scores that this band is really great at doing.

Terminal God’s influences are all over this 8 track album (The Sisters of Mercy, Depeche Mode, 80’s sci-fi/horror film soundtracks), yet the band take these reference points and bring them bang up to date with their own unique reprogramming. Meridian is nothing like anything you will listen to this week, this month or probably this year, and it’s for this reason I urge you to partake in Terminal Gods’ latest.

Watch this! The Anchoress releases second single Unravel from her forthcoming album.

December 5, 2020 0
Unravel is the second song to be released from the forthcoming The Anchoress Album, and arrives with...
Read more

Watch this! The Anchoress releases second single Unravel from her forthcoming...