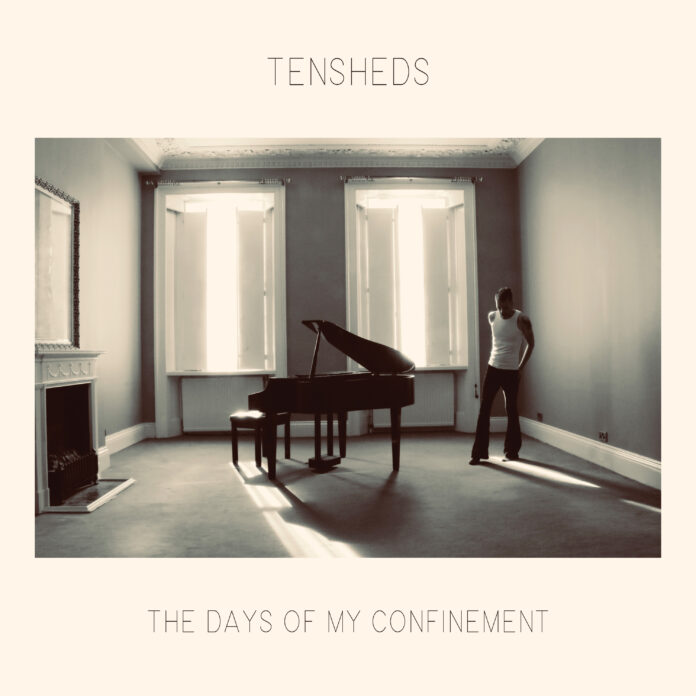 Tensheds: The Days Of My Confinement 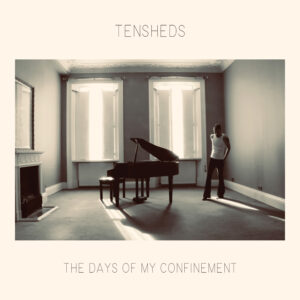 Tensheds draws on the inspiration of his fan base to produce the ultimate in solo albums, The Days Of My Confinement, which proves to be one of the definitive statements of 2020. Ian Corbridge checks in for Louder Than War to hear the talented multi-instrumentalist demonstrating once again that the piano really is King.

It feels almost inconceivable to think that it was only just under 12 months ago that Tensheds released his latest album, Deathrow Disco, conveying a sense of uplifting optimism from a background of disfigured images and imprisonment. Significant irony rests on those sentiments with all the shocking events that have enveloped the world over the intervening months and the addition of numerous new words and phrases to our day to day language that previously had rarely, if ever, been spoken. These are words and events which bring new meaning to the overwhelming sense of imprisonment or confinement that so many people continue to feel at the present time although there are now glimpses of optimism starting to flicker in the light at the end of a seemingly endless tunnel. Without any question these events have challenged even those of us who have the most optimistic view on life.

Throughout the ten years since the virtuoso pianist emerged with the aptly entitled debut album Beautiful Crazy, the man behind the mask, Matt Millership, has never shied away from the challenge of pushing the boundaries and expanding the sonic landscapes of the piano, in all its various forms, which provides the focus for much of his creative output. And as lockdown was announced in March 2020, and an extensive UK tour was immediately cancelled, Tensheds set up his first ever live stream direct from his own living room in a bid to maintain that important contact with his ever expanding fan base.

It was through sowing this very early seed that a new weekly celebration emerged for myself and so many others and Sunday evening became inextricably linked to the music of Tensheds and his piano in what became affectionately known as the Punk Palace Sessions. These sessions covered his entire body of recorded work together with covers and themed events from boogie to ballads. Alongside this, inspired by feedback from his fans, Tensheds set out on a mission to write and perform a new song each week from which the idea of producing a new album was born, something which was never on the cards at the beginning of the year. This album, The Days of My Confinement, was premiered live, in full, on Matt’s birthday via his final live stream at that time.

Sharing this musical journey with his fanbase was clearly a new experience for Tensheds. However, it was one which he fully embraced and subsequently enabled him to strengthen his bond with his audience who directly witnessed the creation of this new body of work. It was also a fine opportunity for Tensheds to further promote his long-standing mission “to make the piano King again”.

Tensheds proceeded to use the confines of his own makeshift home studio to record the whole album in a way which defines the term ‘solo album’. It would also enable Tensheds to display his huge talents as a multi-instrumentalist as he built layers of sound from the piano, acoustic and electric guitar, bass guitar, organ, flute harmonica, percussion, bass drum and backing vocals.

The opening song, Ticking Clocks, sets the tone perfectly conveying a sense of calm and stillness in a way that may have previously gone un-noticed within the four walls that surround you, sound-tracked only by the noise of a ticking clock and birds singing. Whilst this immediately draws me towards a feeling of solitude, it is delivered with a beautiful and uplifting melody that helps to lift my spirits and the realisation that there are good things to come from this. With piano runs straight out of a Rachmaninoff text book accompanied by guitar and almost psychedelic background effects, I am enveloped with the ever growing rich textures of the sound.

The Bridge Song is a beautiful ballad full of melancholy and a sense of longing where little hope remains. With just the man and his piano it has a much starker feel albeit with dramatic interludes. Conversely Mirrors is full of flexible rhythms and rich textural colours, seemingly offering a sense of relief and hope and for the future at a time when so much darkness falls upon us all. The strong piano breaks stir the very fabric of my soul as the song unfolds, ultimately leading to a tender run off at the end of the song conveying a sense of contentment.

In Cotton Wool World Tensheds bares out his soul almost searching for solace and support at such a difficult time, with the lone piano providing a very sombre mood. And this sense of support carries through into Hell Is In The Water but at a much higher tempo with thumping piano rhythms, interspersed with boogie woogie piano breaks and accompanied by the use of guitar pedals on the piano, previously used so successfully on The Dandy Punk Prince album. With the layering of instrumentation this has more the feel of a full band song although in this case it’s a one man band.

Into The Light is an altogether more gentle love song with all the hallmarks of a ballad that Nick Cave would be proud of. It oozes warmth and a sense of reflection which provides a perfect antidote against all the sadness surrounding so many of us at this time.

The English Way leaps out with a ragtime feel and backing vocals straight out of the 50’s, with an ever changing tempo throughout. If I knew how to do the Charleston I could almost feel myself doing it as the song unwinds and Tensheds exclaims “You’ll Find Me In Paradise”. And at this point in the album I’m almost there myself. The whole song is set with such a classic old English feel which brings a much stronger sense of optimism, something which I really need right now.

Girl I’m Sorry is a song full of apologies and takes the tempo right back down again. I am reminded of the sound of an old musical box turning before opening up to reveal its contents. Half Of A Heart sounds like another expression of undying love. After a slow start with slightly ominous tones, the feelings conveyed build to a crescendo as the emotion in the vocals grows. Let The Tear Cry is enveloped in longing and loss accompanied by a melancholy solo piano.

The final track, A Girls Tears, is a bonus song not written by Tensheds but by a wounded World War II Polish soldier in 1940. The song was dedicated to the soldier’s nurse who cared for him during his recovery in a Lanarkshire hospital. With Remembrance having just passed and such focus being directed currently to the nursing profession, the premiering of this song after 80 years could not have been more aptly timed. 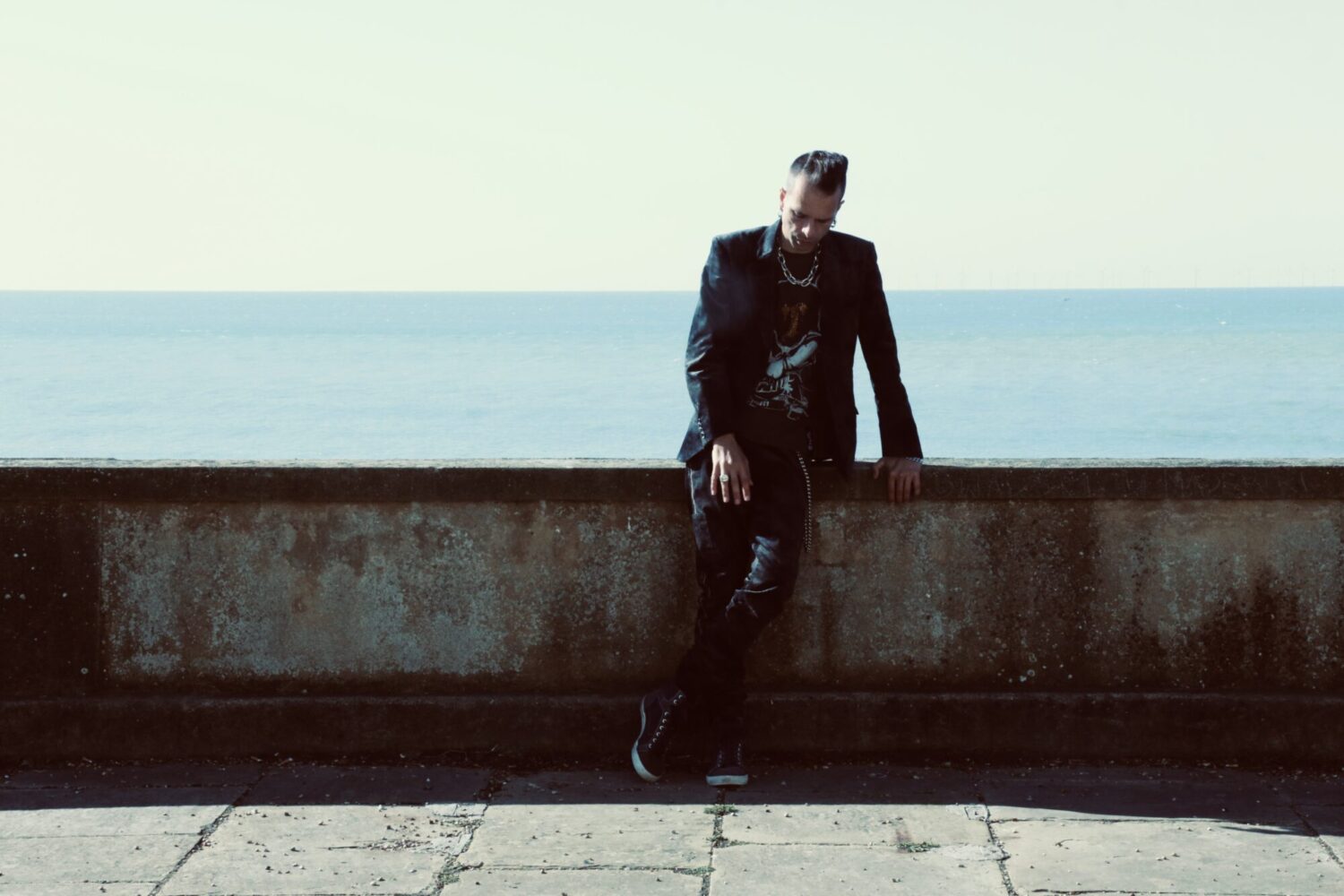 In many ways the album feels to me like a fine companion piece to Crazy Beautiful which remains one of my favourite albums of the previous decade. Mention should also be given to the exquisite mixing undertaken by Jez Leather at the Dynamite Jet Saloon, bringing a clear sense of refinement and completion to the whole project, especially in such difficult circumstances.

The Days Of My Confinement is a definitive and intense body of work for the times we currently live in, reflecting on the many challenges we face right now, but also offering some much needed hope for the future. We should all be able to find ourselves within these songs and the emotion found in the music which is no mean feat within any album. From beginning to end Tensheds has used his unique style and uncompromising power of expression to create a powerful and evocative mood in these sad and difficult times. And if you want to hear some of these songs in a live setting, I highly recommend tuning into the Punk Palace Sessions which have now recommenced each Sunday evening via Tensheds Facebook site.