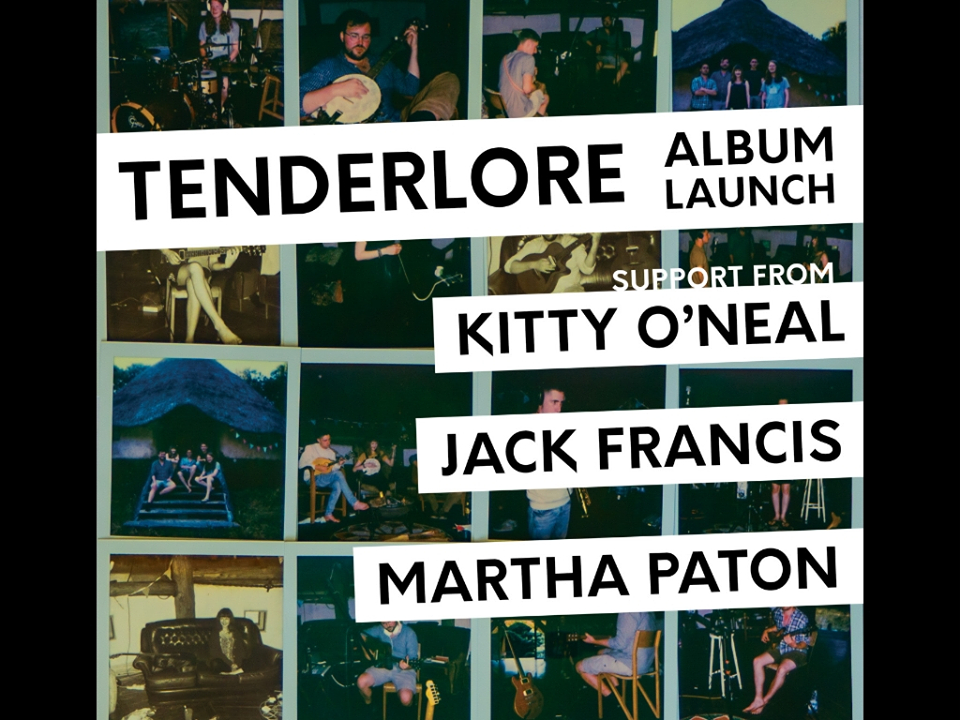 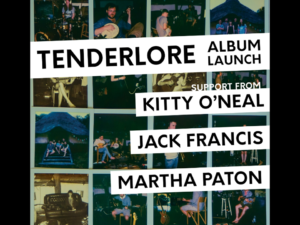 Henry Baroche reviews ‘the Night of a Thousand Plaid Shirts’ as Tenderlore release their album… and a issues a plea to “Southampton-at-large to wake up to the astonishing collection of talent tirelessly gigging and creating within its (city) walls”.

The Brook is a venue I’ve been to a few times before, but I’ve never seen it quite like this. Tonight, the local Southampton music scene’s Folk/Roots brigade has taken over. With scattered fairy lights for stars, and a forest of instruments on-stage, the collected artists brought the naked, natural force of the human voice to the epicentre of a night of eclectic, excellent entertainment. They may have not have filled the 500 capacity venue, which is regularly packed-out by members of the touring tribute act scene, but regardless of numbers, this night was a resounding success. By virtue of the sheer number of other gigs played across the city by these four acts, and their commitment to and integral part in Southampton’s thriving but oft overlooked music scene, they thoroughly deserved to be and perform there.

If the Folk/Roots scene in Southampton is to be referred to by any collective noun, I think brigade is one of the most apt. You might expect something cosier to collectively encapsulate them – a snug of Folk/Roots musicians; a jumble of players; a tea-cosy (even) of performers. But these musicians – Martha Paton, Jack Francis, Kitty O’Neal (and band) and Tenderlore – are well drilled, achingly accurate, and able to transform their instruments and voices into skilled utensils of beauty.

Possessor of perhaps the most Folk-inspired name of the night, Martha Paton opens the proceedings with her guitar and her delicately soaring voice. Her songs are a pleasant presence in the ear, flowing with the ease of a mountain stream, and lapping about their urban subject matter with a direct yet tender tongue. She is well received by the growing crowd as the venue fills up. See below for her song ‘Be Good’, filled with strong musings on modern-day hypocrisies, performed for Sofar Sounds London:

If you’ve been to a gig in Southampton over the past few years, there’s a fine chance you’ve seen Jack Francis. I had the pleasure of witnessing his music for the first time at The Joiners as part of a Club Psychedelia triple-bill of acts. Jack mostly performs solo, and is often seen gigging around the well-known bars of London, but this occasion saw his live act augmented by his band of drums, bass and keys/pedal steel, which heightened his gorgeous, expertly written material to ethereal levels of soulful magic.

He was evidently humbled by the experience of playing in one of the city’s prime venues, and doing so in the company of musical friends and collaborators; yet this did not detract from his performance in the slightest. Numbers like ‘Sunday Dreaming’ float through you like a blissful weekend afternoon, their conclusion rousing you from a transcendental reverie that cuts right to the heart of the well of “good music” that countless singer-songwriters never manage to find. Jack Francis clearly has his own secret shortcut to that fabled place, and is highly regarded and envied by his peers for it. His tune ‘The Wheel’ may not have reinvented the art form and tradition he subscribes to, but with its spacious, sparing construction, and pleasing Irish lilts in the vocal from time to time, is sure to carry this artist somewhere good.

Joined by her band of drums, double-bass/electric bass and lead guitar, the 80s Bowie-esque style of Kitty O’Neal assumes the penultimate slot of the night with a quiet, direct confidence. She filled the same space on the bill when Band of Skulls performed an orchestral opening of Southampton’s newest concert space and has been highly active with gigs around the city and beyond, so is used to being in an auspicious position.

There’s an urgency to her music, but not in a grab-you-by-the-scruff-of-your-face, punkish way: her style is more a pointed, melodic word in your ear, and the collective ear at the Brook is firmly tweaked by her and her band’s performance. Her voice and stage persona are pared back, soft but purposeful, and I can easily imagine hearing it coming out of a radio speaker, or the modern-day equivalent in this post-radio era. Her band are more expansive in their approach, and navigate the clever chord changes that punctuate Kitty’s songs. The broad guitar solos are not always to my taste; often I feel that the purpose of a solo is confused, taking the song to a place that feels out-of-context, rather than blending an idiosyncratic flourish into the mix. But the band generally gel well with Kitty’s music, and their polished sounds shine through in this performance for Sofar Sounds at Southampton’s renowned antique and crafts warehouse, Robin’s Nest.

For the final hour or so of this musically-abundant evening, Tenderlore receive a warm, highly appreciative welcome, and fill the room with the breath-taking harmonies they have become renowned for. I use the term ‘breath-taking’ not merely as a place-holding adjective, because that’s the kind of word music journalists typically use to describe high-quality art, but because it literally feels that the Tenderlore trio of vocalists Hayley McDonnell, Olly Lewis and Rob Kitney have consumed the collective breath of the audience, and utilised it to power their stunning triumvirate of vocals.

Not only are they highly adept vocalists, but are fantastic all-round musicians. They swap between the three of them throughout their set acoustic guitars, banjo, mandolin and luscious electric guitar, each playing with a unique, varyingly accomplished style. Rob Kitney for me is the standout musician, layering perfectly judged guitar and mandolin over the complex arrangements of the Tenderlore catalogue.

Vocally, they each bring a tender delicacy that is then augmented by an impressive power that is never overstated or superfluous. They have evidently been singing, performing and writing together for some time, and their professed plans to tour the UK and Europe are sure to reach an appreciative audience outside of the nurturing hub of their hometown, especially Europe.

Normally performing as an acoustic trio, they have brought with them for the album launch a drummer and bassist, which adds a firm foundation to the bulk of their material, and equally an urge to swing the hips that would otherwise be less accentuated. The ‘1-2-3-4’ thump of the bass drum that litters the work of many established Country/Folk/Pop acts is overused, and threatens to become predictable, but the playing is so good and nuanced that you forgive them any pretensions upon formulaic cheapness.

The album that they are honouring, Ty Crwn, which means ‘roundhouse’ in Welsh, in honour of the thatched Iron Age construction where the album was recorded, is given a good airing throughout the set, and they play the songs really well. The subject matter is often rooted in a sense of community and family; fittingly, they are surrounded tonight by friends and family, and the local community of musicians and music fans alike who have supported them in getting to this point. Olly dedicates two numbers to friends and family, and this reinforces for me the sense that the music of Tenderlore is somewhat of a soundtrack for the generation of young people who enjoy the company of their parents, and vice versa.

Whereas the music of Idles, which rightfully gains a lot of coverage in the pages of LTW, is perhaps a music for those people with missing or estranged parents, giving them a symbolic absence to rage against and project onto the injustices abundantly found in politics, the music found here at The Brook is more grounded in natural beauty and calmness, and the sense that you always have a home somewhere, with someone.

Both bands, though at parallel opposites of the sonic landscape and at juxtaposed musical purposes, are singing of and pining after a sense of community. The Southampton creative scene has that in abundance, yet the city at large seems unaware of it. I have come to regard it as the norm that touring bands will sell-out venues elsewhere in the country, but will struggle to fill a quarter of the bigger venues in the South coast’s answer to coastal cultural hubs such as Liverpool, Manchester, Edinburgh and Glasgow. Hopefully Southampton at large will wake up to the astonishing collection of talent tirelessly gigging and creating within its walls. But for now, the intimate community of the enlightened that came out in voice for the Tenderlore album launch on Friday are very happy with their little secret indeed.

All words by Henry Baroche whose author profile is here.