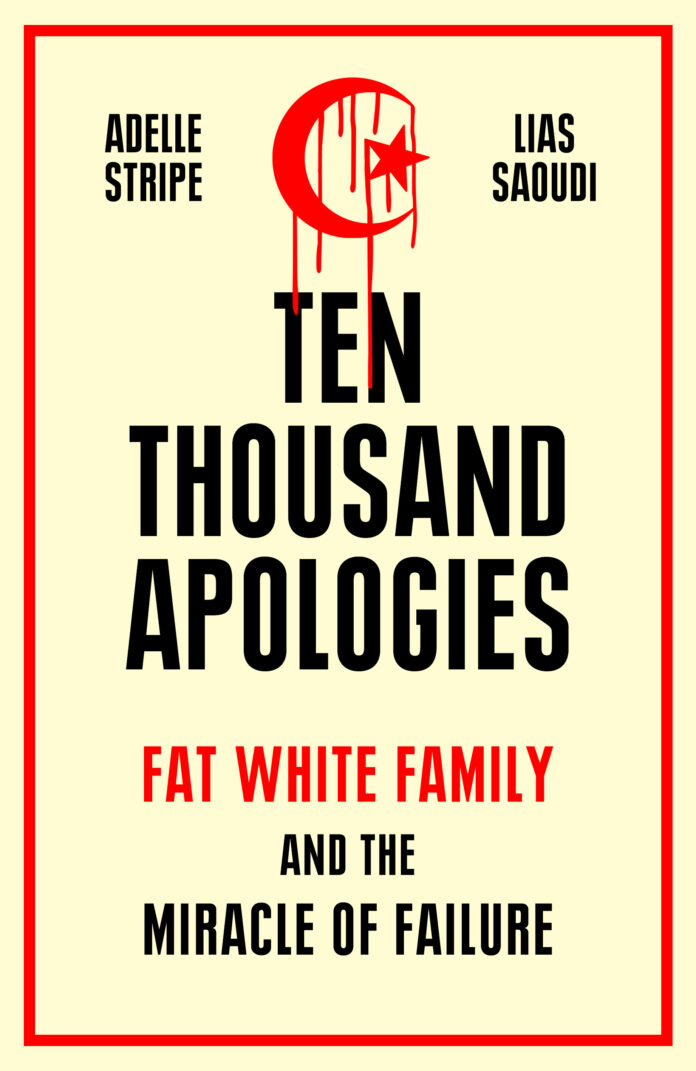 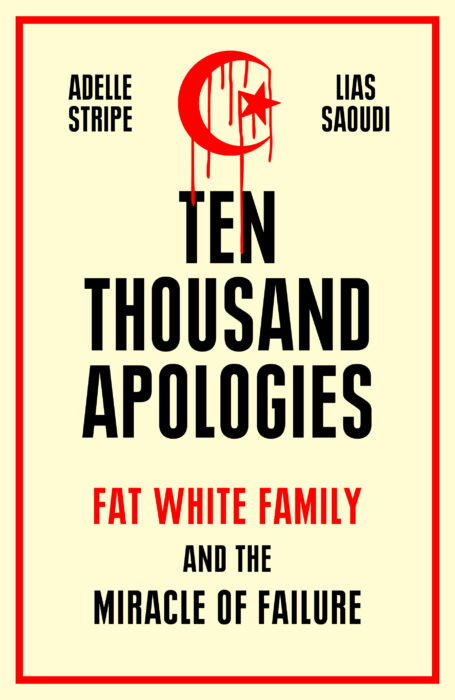 There are two miracles in this brutally honest account of the rise and spectacular fall of Fat White Family, who despite their chaotic existence remain one of the more interesting British bands this century.

The first is that none of the 25 musicians who passed through their ranks in a remarkably short space of time died directly from the industrial amount of Class A’s they managed to score and absorb via virtually every orifice. The second is that given the toxic mix of massive egos, sibling rivalry and chronic insecurity that any music was actually recorded. What is really refreshing about Ten Thousand Apologies is that it spares no one, nor attempts like most rock biogs to justify the (very) regular highs and depressing lows. Frontman Lias Saoudi, with his occasional urge to smear his own shit on himself when playing live, offers his thoughts in short pieces punctuating the narrative, and his remarkably honest conclusion is they messed it up themselves. There is no one else to blame.

Of course, you need to be aware that the Lias sections of this book are his version of events, but his co-author Adelle Stripe has done exhaustive interviews with all the main players, including his brother Nathan and the band’s main songwriter Saul Adamczewski. That Stripe managed to make any sense of what can be at best often hazy recollections is testament to her skills as a writer.

In many ways, this is a rock book that is less about music and more about race and class, as it was a surprise to find that the often half-naked and addled Lias of the band’s incendiary live shows was also a fine art student at the prestigious Slade School in London. Despite what is clearly a golden ticket out he manages to waste a big chance to break free of his working-class insecurities. Stripe has form for getting under the skin of insecure working-class creatives as she turned her PHD dissertation on the life of troubled Bradford playwright Andrea Dunbar into her equally visceral debut ‘novel’ Black Teeth and a Brilliant Smile.

The Saoudi brothers have an Algerian dad and a mum from Huddersfield, so much of the early part of the book focuses on their experiences with appalling racism in Northern Ireland, where they lived for a while after their partners acrimoniously parted, and their visits to North Africa to try and make some sense of their identity. Both Stripe and Saoudi write movingly of these trips, and how despite being more than a bit bemused by their career choice their Algerian relatives made them welcome in a way their own country often failed to. Enter stage left the more middle-class Adamczewski, who brings a whole different bag of demons, that only get worse as the twin evils of smack mix with the insatiable demands of the music industry, sending virtually every band member over the edge, with some never to return.

Essentially Fat White Family’s tour bus becomes a mobile psychiatric ward, as members drop in and out of rehab between making some classic singles, and living in the sort of squalor that would have shamed the Britain of Charles Dickins. As Stripe perceptively points there are no care packages for bands, which has a catastrophic effect on their ability to do their day jobs or sort their increasingly seedy lives out. It is to Saoudi’s credit that he doesn’t spare himself taking responsibility for his often fractious relationship with his increasingly volatile brother, and an ongoing inability to tackle Adamczewski’s often overbearing and self-destructive behaviour. The result is a decent debut album, a pretty unlistenable second and the last album as they decamped away from their London dealers to Sheffield to offer a unique take on modern Britain that as time goes on is proving to be a minor classic.

It is also funny in a tragi-comic way especially when Nathan, and bizarrely his mum, get into a row with the tiresome Mark E. Smith at Glastonbury. There is an amusing account of a bunch of ill-prepared junkies, setting out on the worst hike in history that nearly killed off the band’s main members, which would have been a suitably pathetic way to exit rock and roll.

The naïve Sean Lennon’s generous offer of a helping hand is thrown right back in his face, as they break into Yoko Ono’s thankfully empty bedroom, and then manage to lose one of his dad’s priceless guitars, which Sean had foolishly lent them.

There is also a tribute to sometime band guitarist Dale Barclay, who died of an unrelated brain cancer, which is beautifully written and moving as Lias helplessly watches his friend struggle with a serious illness.

This isn’t a conventional rock biog in any way as the music features quite sparingly, but despite that, it is destined to become a classic of the genre as it’s a wonderfully readable account of how to really, really spunk up the wall your chance for greatness. That said Stripe’s clear narrative and Saoudi’s crisp prose do offer a warning that will undoubtedly be ignored by the next lot of chippy and mentally ill musicians who decide to self-medicate rather than actually make the most of a golden opportunity most people would die for.

Ten Thousand Apologies: Fat White Family and the Miracle of Failure by Adelle Stripe and Lias Saoudi is available on White Rabbit via all independent bookstores priced £20 in hardback.