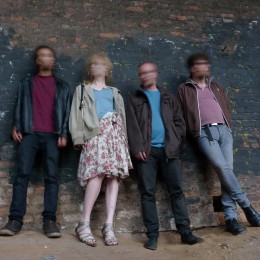 A partnership between resurgent record label Valentine Records and moody, electro-rock four-piece Ten Mouth Electron (TME) marks an exciting time for Manchester music.
TME – known for dark yet rewarding depths of sound capped with pop sensibility – is set to be a match made in heaven; especially with a slew of new material from the band on the way in 2016.

TME’s unpredictable vocal arrangements and echoing, abrasive guitar/drum combinations evoke twisted emotions shot through with burned valves and broken transistors. There’s still room for mood in Manchester it seems. Listeners were given a fresh taste of this for 2016, as not only have TME recently joined with resurgent record label Valentine Records, but kicked things off with a new release ‘Since My House Burnt Down’. It’s a great blend of urgent guitars and gritty vocals. TME’s joining Valentine is set to mean big things; as you can also expect an exclusive new track on the imminent Valentine 100 compilation but also the promise of an album in the coming months.

It’s a great blend of urgent guitars and gritty vocals. TME’s partnership with Valentine is set to mean big things; as you can also expect an exclusive new single on the imminent Valentine 100 compilation but also the possibility of an album.

Artistry clearly meets assembly in this group’s work. Their debut release ‘Happy Birthday (Bang! Bang!)’ could hardly be more different to the ears from 2015 jangly ‘Young Nuns’. And the breakneck urgency of ‘Since My House’ marks another departure in style for the band. TME, it seems, are determined to haul us with them on a creative trip that resists pinning down. The enigmatic members have plenty of other experience too, having played individually in other bands including Ill and Locean.

Yet a crucial marker of progression is that this bad have experience yet still are willing to experiment. Take one of 2013’s singles ‘Cut Up Technique’. Not only do the lyrics explore an experimental method of songwriting, but they are served up through surprising rhythms and mega-phone vocals, inviting the listener to ‘take scissors to me.’ They certainly aren’t shy at articulating dread, with other track titles like ‘Hate Week at Coven’ hinting at a parody of the political and personal. One thing is for sure with TME: it’s expressive, emotive and seriously catchy too.

I was lucky enough to speak to the band about their recent work:

So was 2015 a quiet year for you or has there been something creative brewing?

It didn’t feel like a quiet year. We haven’t gone away, but we’re not a band that posts selfies at rehearsal, so maybe that has something to do with the perception that things have been quiet. We’ve been writing and recording new stuff, which we’re now ready to show off. Some of it is recognizably Ten Mouth and some is a curveball of sorts.

How does it feel to be active on the Manchester music scene at the moment?

It’s certainly the best time to be making music and Manchester/Salford must be among the best places for it outside London. When Lydia Lunch visits Islington Mill and ends up becoming part of the furniture for two weeks you know the place must be doing something right. The mill alone has enough energy to keep two cities alight and that’s before you start talking about smaller places.

Will anyone ever get to grips with Ten Mouth Electron? You describe it in various ways; ‘Its sound is of a wet tusk husking dryly the rusted busk./ Brothers and sisters has it none. Ten Mouth’s father is its son.’ Why is being enigmatic important to you?

Hopefully they won’t, but it won’t be because we’re being wilfully evasive. Anyone who listens will know we’re hardly avante garde. No one reads those biogs anyway. We get described in different ways because our music is always different. It’s not an attempt to be enigmatic. Plus, trying to write about or describe your own ‘sound’ is an appalling exercise.

We’re kicking things off with this Valentine release and are excited about the prospect of putting an album out with them. We’ll almost certainly be releasing a couple of tracks from the LP along the way. We’ve got gigs coming up in the North East in March – details on the Facebook page, website and usual places.

2016 is the year to feel the full energy behind Ten Mouth Electron. They’re not only sending soundwaves surging across the Manchester underground: busy recording (including from an intimate studio in The Star and Garter) but have already been on the airwaves too – the new track ‘Since My House Burnt Down’ was well-received on ALL FM 96.9. They’ve referred to it as a track ‘which has been lying around for some time’, but the powerful sound suggests it so much more than that.

This band builds unapologetic post-punk sound, a sound close to Valentine’s heart. Another passion shared by label and band is an exciting live offering – with TME expected to make a number of appearances this year in the North East and Manchester. Feel the energy and keep updated.

For more information on Ten Mouth Electron, you can visit their website. They are also on Twitter and Facebook, and have a page with Valentine Records.