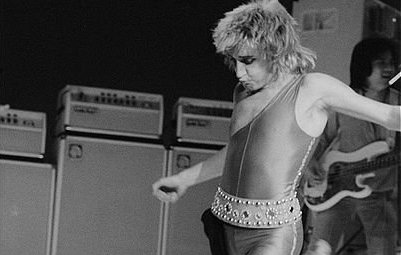 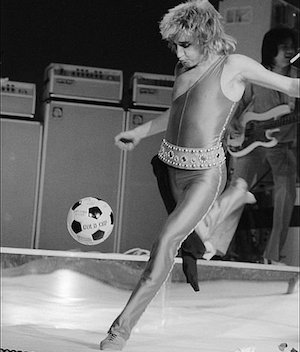 When the worlds of music and sport cross-over, anything can happen, from singing boxers to chess playing rappers. Below are ten such moments caught on camera…

He’s survived suicide attempts, drug addictions and overdoses, public backlashes and even Surge Knight who ‘supposedly’ hung him off a hotel balcony. But Vanilla Ice came second when he took on Todd Bridges for this celebrity boxing bout (aka ‘Willis Jackson’ from US TV show – Different Strokes…”What you talkin about Willis”. ) Check out this prime piece of trashy American TV from 2002, a program that the US publication ‘TV-Guide’ ranked as number 6 on its ‘Worst TV Shows of All Time’ list.

Vanilla Ice, real name Robert Van Winkle, has album sales which are reputed to be over 15 million, while his individual songs apparently total over 160 million, and he was actually the first person to take a hip hop tune to the top of the US Billboard charts. But these days he’s more likely to be found renovating properties on US TV with his DIY shows such as ‘Ice my House’ and the ‘Vanilla Ice Project’, can you imagine what the theme tune’s sound like? – ‘if there’s a household problem he’ll solve it, check out the antique flooring while his DJ restores its…ice ice baby…’

But check Todd Bridges knock ‘Ice’ around the ring like a Laurel and Hardy sketch. Putting him down in both the 1st and 2nd rounds to take the judges scores 27-30 in his favour…so that’s what Willis must of been talkin about!

Watch as Dave Seaman looks on and realises he’s just been out-classed by the guitarist from Kasabian. Though a talented player as a youth, these days he looks more like a guy who you’d find scoring speed-balls on Sunset Strip rather than wonder goals at Old Trafford, but Serge Pizzorno’s obviously still got ‘it’.

Whether you’re a fan of Kasabian or not you’ve gotta give it up for the Leicester lads touch, timing and finishing as he scores what must be rock ‘n’ roll’s greatest ever goal…Eez ehh!

OK, he’s no Julio Iglesias but can you imagine Manny Pacquiao’s bucket list;

Add to that ‘pop star’ and that’s a pretty spectacular to-do list from a guy who came from extreme poverty.

And although not pitch perfect, Pacquiao’s actually a singing star in his native Philippines with a couple of album releases under his belt. Go on YouTube and check out his duet with Will Farrell for a tongue in cheek cover version of John Lennon’s ‘Imagine’, the off-brand singing and timing, as well as Ferrall’s cheeky performance, is worth a giggle.

But none of that seems to bother the current WBO welterweight champ as he continues to tick-off his dreams and aspirations in a way we all wish we could. Listen to him knock out this version of George Benson’s sloppy love song, ‘Nothing’s Gonna Change My Love For You’, taken from ‘Jimmy Kimmel live’ chat show.

Filmed just a few years before his death, Elvis put on this karate exhibition for a documentary on martial arts, although not impressed with what he saw later as he pulled the footage and it stayed in the vaults until 2009.

Originally taking up Karate via his army days he worked his way up to an honorary 7th degree black belt and went on to open up his own karate school. Though actor / martial arts expert Chuck Norris, who at one time trained his wife Priscilla, claimed Elvis acquired his belts and rank by bestowing gifts and money to various teachers and schools. He even claimed Priscilla, who later left Elvis for another one of her karate teachers, would of ‘kicked his arse’.

But Elvis was known famously for his generosity towards family, friends and fans alike, and as heavily medicated as he was, I’m sure Priscilla would of easily floored him. Pretty much like he is here in this footage from 74, shot just thirteen days before he gave possibly one of the worst performances of his career at a concert in College Park, Maryland.

Either way, though, he’s still the King and always will be, just like the video’s narrator Wayne Carman states in this fascinating footage from an unfinished documentary:

“…a lot of people would always ask me why Elvis wore his boots and sunglasses while he did karate?…………..er well, because he was Elvis”.

Oh dear, 50 cent performs the baseball version of Diana Ross’s world cup opening ceremony penalty miss with this wayward pitch at Citi Field stadium, the 1st pitch of the season right before the game between the Pittsburgh Pirates and the New York Mets. Though this footage actually proved to be a great piece of publicity for ‘Fiddy’, as it was shown repeatedly across US news all that week, the same week before the release of his latest album. Was it really a mistake or did hip hop’s PR king “do it again.”

Some of the loudest football fans and respective stadiums from around the world can be found at places like Boca Juniors ground ‘La Bombonera’, the ‘De Kuip’ at Feyenoord and Fenerbahce’s FC’s ‘Şükrü Saracoğlu Stadium’ … but surely none are as skilled nor as passionate as Celtic fans at home when it comes to knocking out epic terrace versions of classic pop tunes. Just like they do here with Depeche Mode’s ‘Just Can’t Get Enough’… Hail Hail

It should really come as no surprise to learn that Wu Tang founder / leader the RZA is a pretty formidable chess player.

Making his own strategic moves within the music biz back in the early 90’s, he set the Wu Tang up like a chess game itself. Firstly by bringing together the best rappers from his neighbourhood, who some of which were actually enemies of each other having shoot outs, to the table to form one of the greatest hip hop groups ever. He then changed the game by getting each rapper in the group signed to a different label with himself taking the producer role on each of their solo albums. Then by creating one of the biggest and most influential hip hop / urban clothing labels ever (with ‘Wu Wear’) its safe to say the RZA is with out doubt one of raps shrewdest players.

Despite all that, though, watch here as he comes up against a young student and highly ranked chess player who takes him back to school for a lesson at his favourite board game.

So he gave up the white just to go and get addicted to the green … some people never learn do they? Here’s Alice Cooper explaining how he got hooked on golf.

One of the fastest men in the world is also a pretty handy guitar player too, check out Lewis Hamilton playing along with Modern Music School guitar teacher Paul Ludwig.

Other sporting personalities out there who play guitar have included John McEnroe, ex F1 driver Damon Hill and cyclist Bradley Wiggins. But one of the most talented could be ex-American football player Bernie Williams who won 4 world series with the New York Yankees. An amazing jazz guitarist who can really play, check out his performance with Paul Simon on YouTube.

Imagine; back in the day Creation Records taking on Factory Records in a charity football tournament. With both labels making teams up from some of the prem’s greatest players who go all-out playing on a packed-out council estate pitch… well that’s kinda what New York’s ‘Rucker Park’ played host to back in 2003 when hip hop and basketball came together for a summer tournament that went down in history.

Below is the excellent ‘Blackout’ documentary which details the year Jay Z’s ‘Rocafella’ and Fat Joe’s ‘Terror Squad’ teams went head to head on the Harlem housing projects famous basketball court. A must see event which had fans queueing round the block to get in, sat on top of buildings, and even in the trees just to get a view of some of the NBA’s finest turn on the magic. Including names such as Stephon Marbury, Kobe Bryant and the legendary Lebron James. It’s a documentary loaded with drama, tension, great behind the scenes stories and of course some amazing basketball, bringing the worlds of both sport and music together like only the Americans can.