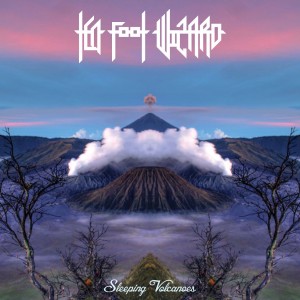 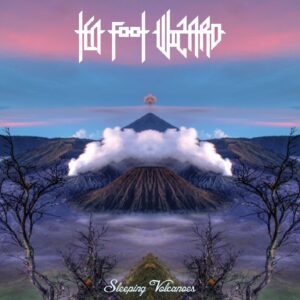 It’s seems the older I get, the less excited I get about pretty much everything. Whether it’s a holiday, the release of a new film, or even the prospect of casual sex, I find myself shrugging without any real buzz or feeling of positive anticipation. The older I get, the more I become a miserable dick. So it came as a shock that when sent Ten Foot Wizard’s new record, Sleeping Volcanoes, I found myself releasing shrieks of pleasure that can only be described as a sound similar to a school girl getting finger behind the bike sheds. I had taken an interest in the band after hearing their first LP, Return To The Infinite, and had fallen in love with them after watching (at pretty much every fucking show they played) the intense energy and devilish rouge antics they brought to their live set. To say I was pleased as piss to be hearing some new sounds from the Manchester “groove-heavy stoner rock” foursome would be the gravest of understatements.

“It’s not as heavy as the last record” singer/guitarist Gary Harkin had said as he sent the tracks over, and it really isn’t. Not that the band have turned into some dreamy synth pop outfit, there is still a fuck load of gristle for the beasts who hail from the more headbanging side of the heavy metal gene pool to sink their teeth into (‘On We Go’ being a perfect examples of this) just the Wizard seem to focus a little more on the groove as oppose to the heavy element of their unique brand of upbeat stoner rock. It’s a little more Fu Manchu, and slightly less Black Sabbath this time around.

What sets Ten Foot apart from their contemporaries is their ability to produce something that’s raw and brutal but with an incredible amount of tongue-in-cheek humour and genuine positivity (to the extent that, at one point, the hashtag #fuckseriousmetal was going about Twitter in reference to the boys). Sleeping Volcanoes is no exception to this rule. While songs like ‘I Miss The Sex’ and ‘Covered In Tits’ seem to do this in a more direct way, it’s hard to deny the surging lift one feels when listening to a track like ‘Railway Shuffle’. It feels like a good karma shot direct into your ear holes. Ten Foot Wizard are exactly how Danzig would sound if fronted by Mahatma Gandhi instead of moody moody Glenn (they’d have to change the name, of course).

The real treat of the entire record comes close to the end, with penultimate track ‘Mind Control’. A face melting riff tears through the sky like some apocalypse causing lightning bolt and strikes the ground as the vocal line “LET GO OF YOUR ANGER” is released with so much throat shredding furore that it becomes impossible to imagine how such a hellstorm rage against conformity can continue without you either shitting or jizzing in your pants. Yet it does, for another three solid minutes of ferocity, before morphing into a haunting breakdown narrated by philosopher Jiddu Krishnamurti before dragging you back in to strike the coup de grâce to your already blown mind.

Sleeping Volcanoes is a slight departure from the sounds of Ten Foot’s first record but, in my humble opinion, it’s a step up. The cliché “one to watch” is thrown about far too lackadaisically these days but, with the Wizard, it holds true. If these boys push hard enough, they could become a tour de force for metal heads and awesome music lovers alike.

Sleeping Volcanoes can be bought from the Ten Foot Wizard Bandcamp and the band’s Big Cartel. They can also be followed @10footwizard on Twitter and ‘liked’ on their Facebook page.