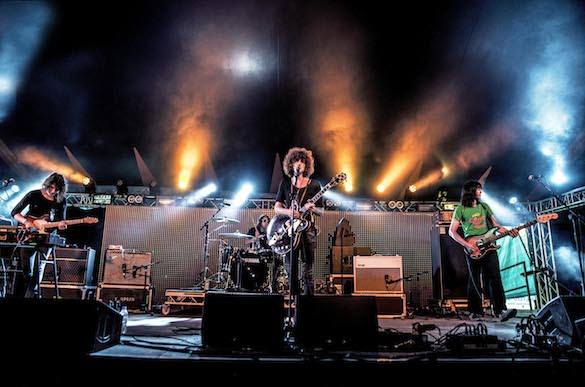 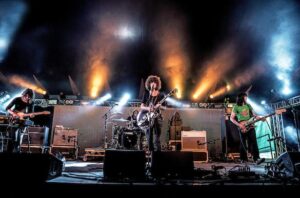 Sun Structures by Temples has been Rough Trade Shops best selling album of what’s been a great year for the band. They’ve been bringing their amazing year to an  end with a final jaunt around the country, a jaunt which included a show in Sheffield last week.

Sheffield’s Leadmill was the venue as Kettering four-piece Temples did their utmost to make a chilly winter’s night in South Yorkshire look, sound and feel like a late-60’s Woodstock warm-up show. And if it wasn’t for the overpriced Red Stripe on sale, you’d have almost bought it, too.

After a fairly uninspiring support slot from Birmingham’s Superfood, frontman James Bagshaw emerged, face hidden under his Marc Bolan-esque barnet, as the band launched into a set which featured ‘Sun Structures,’ ‘Colours to Life’ and early B-sides ‘Prisms’ and ‘Ankh.’

Those familiar with Temples know that their live shows are never going to be sweaty, raucous, floor-bouncing affairs; and it’s the hypnotic, liquid light show backdrop and psychedelic strobe effects which seem to keep the crowd mesmerised through some of the set, with the music taking a back seat. Slower songs, in particular ‘Move with the Season,’ somewhat struggles to capture the crowd and is teetering on the brink of falling flat – a shame as it’s one of debut album Sun Structures more enigmatic and interesting tracks.

But it’s testament to the strength and diversity of Temples’ record that this fairly short set manages to motor through the gears and back again, and the crowd are anything but distracted during ‘Keep In the Dark’ – perhaps their most famous song thanks to a TV advertising campaign – and set closer ‘Shelter Song.’

The band return for a two-song encore which culminates in the trippy ‘Mesmerise.’ It’s drenched in a delicious amount of reverb and comes with a prolonged outro which allows Bagshaw and his band to loosen the neo-psych shackles and cut loose as they thrash their guitars manically.

It’s a great way to end a night of technically superb but not always truly captivating music, and it’s good to see the band – after a hazy, dreamy set – finally let their superbly coiffured hair down.

All words by Jon Taylor. More from Jon can be found at his Louder Than War Author Archive.