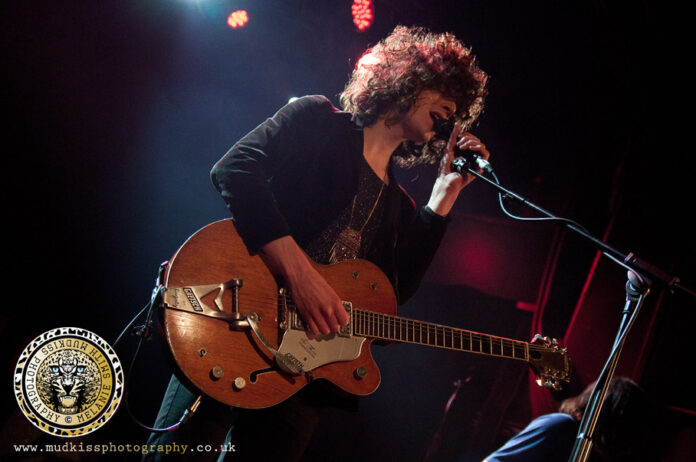 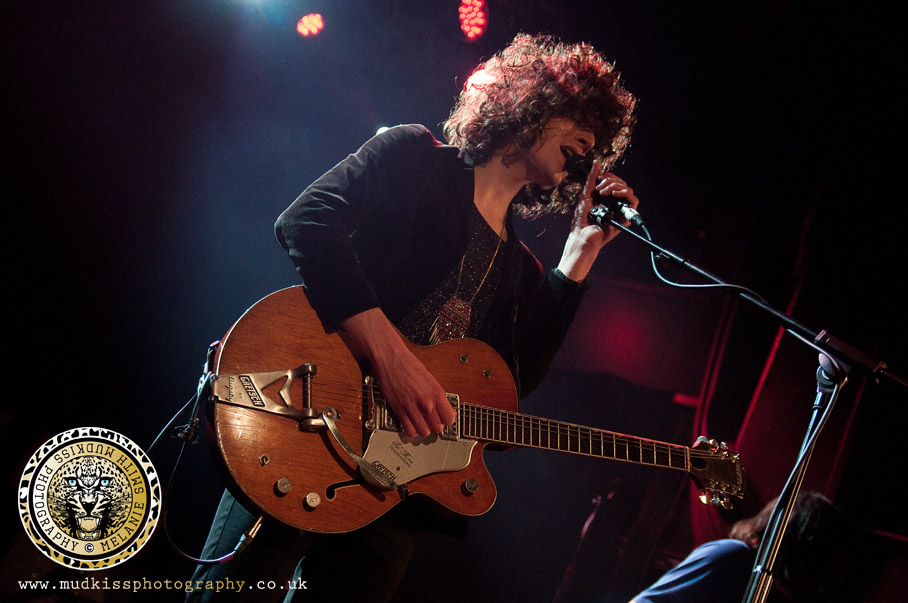 This photo of Temples and all others on this page by Melanie Smith.

‘I ain’t no square with my cork screw hair’

There is a neat tradition of classic curly hair and psych genius that is the backbone of most of the genius in UK music- from Syd Barret to Marc Bolan- the hair and the riffs matched in a tumbledown perfection and now Temples have touched on that jagged nerve of dayglo perfection and that alien sound of otherness that marks such greatness.

We are in a new psychedelic age of disparate bands from Toy to the Horrors to Iceland’s Dead Skeletons to the Italian underground freak scene and even tonight’s support band Childhood who deal the same kind of Acid reign tripped out bliss guitar pop- there is, of course, no connection and no scene making but a loose confederation of tripped out music.

With their psychedelic tinged, masterpiece guitar rushes, Temples are the right band at the right time. They are a blur of beautiful noise, jangling guitars, anthemic songs, perfect drones and the ebb and flow of trips music that manages to occupy that precious space between closing your eyes and floating way on the surge of sound and the arms in the air rush of perfect British guitar music.

That the 900 capacity room is sold out is testament to the band’s rush to the top- the band’s fast rise makes a mockery of their lack of radio play. There are a lot off Stone Roses fans in here tonight mingling with the usual suspects and its the bands window pane, pounds, shilling and pence acid tinged guitar music that combines the naive experimentation of the late sixties and the quark, strangeness and charm of the bedsit hippie droog revolution of the seventies and the metal guru of primetime Bolan as he was slipping and slider-ing from acoustic poet to the ultimate glam rock star and the pristine perfection of the 1988 Stone Roses- all those perfect periods of chemical magic when imagination and a glowing life affirming twist combine.

Temples are not just children of these revolutions- they are the equals to all these bands- they have that mystery rush, that magic twist that lifts you to the heavens, they have perfect songs dripping with melody and that skill at creating songs that build and build and envelop you with their hypnotic power.

This gig is transcendental. Everything is perfect about the group. Their songs, from their already classic debut Sun Structures album, surge and soar and the sound is crystalline and perfect. James Bagshaw’s vocals are as beautiful as his Gretsch Country Gentleman guitar – switching from a hushed introspection to a near falsetto to the perfect English clipped voice that is so much part of the perfect psyche experience.

It’s hard to believe that it’s only two years since Temples came together as a bedroom project- writing songs after a stint as the Moons and before that indie hopefuls, Sukie. Formed in Kettering they have that small town brilliance about them- the perfect backdrop to this kind of music- small town England is one one level suffocated by boredom and another level glows with a lysergic warmth- the olde churches and the damp Victoriana are so much part of the British psychedelic experience which is so different from the American version. Temples have that Englishness about them and that’s one of the key factors to the their greatness.

Temples are the sound of now. Every song sounds like a classic. Their live set, like their album, has that anthemic rush of classic Brit-trip. Tonight felt like the Roses early 1989 tour- that moment when you felt it coming and you were waiting for the crescendo- that Blackpool Empress Ballroom moment. Temples are on that fast forward. The people that know, know and it’s gonna happen…