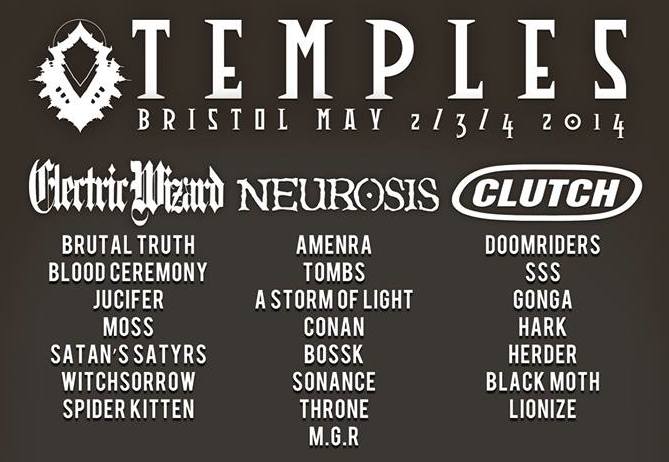 Bristol may not be the first city that springs to mind when you start talking to people about “heavy music”, but with it about to host the inaugural edition of Temples Festival this May that’s about to change.

It was obvious right from the off, with its first announcement of Neurosis as the Saturday night headliner, that Temples Festival was going to be a bit special. Since then the main organiser, one Francis Mace, has been slowing dropping name after name of incredible artists, all unmissable in their own right, and all adding to a lineup that’s ended up looking like someone’s gone through the last few year’s lineups from all the best festivals of this ilk around the world, selected the best bands from them, then invited each and every one to Bristol.

Perhaps one of the reasons Temples has proved so enticing to all these artists is its ethos. Independent and sponsor-free it’s a festival run by fans for fans. You get no stereotypical promoter hype from Temples Festival (with a lineup this solid they can leave that to speak for itself) and they’re intentionally underselling the venue’s saleable capacity “to create the most comfortable festival experience possible for all ticket buyers”.

On top of that the diversity of the artists playing is particularly notable. With the three headliners alone, Electric Wizard, Neurosis and Clutch, running the gamut from doom, stoner metal, sludge, stoner rock, post-metal, hardcore, progressive metal, experimental, hard rock and atmospheric sludge you can see that this a festival languishing in and celebrating the best of heavy music.

The full lineup can be seen in the poster below – a cursory glance will reveal many Louder Than War favourites in there. Some of the bands taking part include the afore-mentioned Neurosis, Electric Wizard, Clutch plus Brutal Truth’s last ever UK performance, Doomriders, Repulsion, Wolfbrigade, AMENRA, A Storm Of Light, Wolfbrigade, Dragged Into Sunlight and around forty others of the most prestigious names in contemporary heavy music.

Our agenda from the offset was to bring a well-programmed, independent, diverse, and specialist heavy music event to the South West of England – and having achieved specific targets outlined from the inception of Temples Festival, we are already well under way with Temples Festival 2015,  in keeping with the quality of artists on offer at our 2014 edition we already have a number of prestigious international artists confirmed, and a host of exciting developments to be announced in the not too distant future……..

This is one that you really need to attend if this is your kind of thing, but the news coming from Bristol is that if you don’t have your tickets yet you’ll have to act quickly as they’ve now sold out of Weekend Tickets, leaving only Day Tickets (£35) available.

To buy one of these day tickets, available in limited numbers, visit the following places: 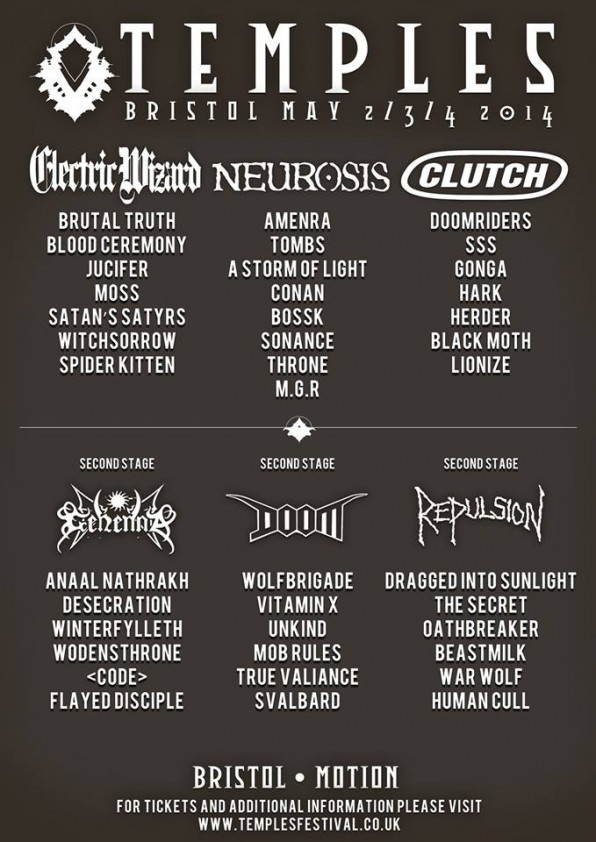