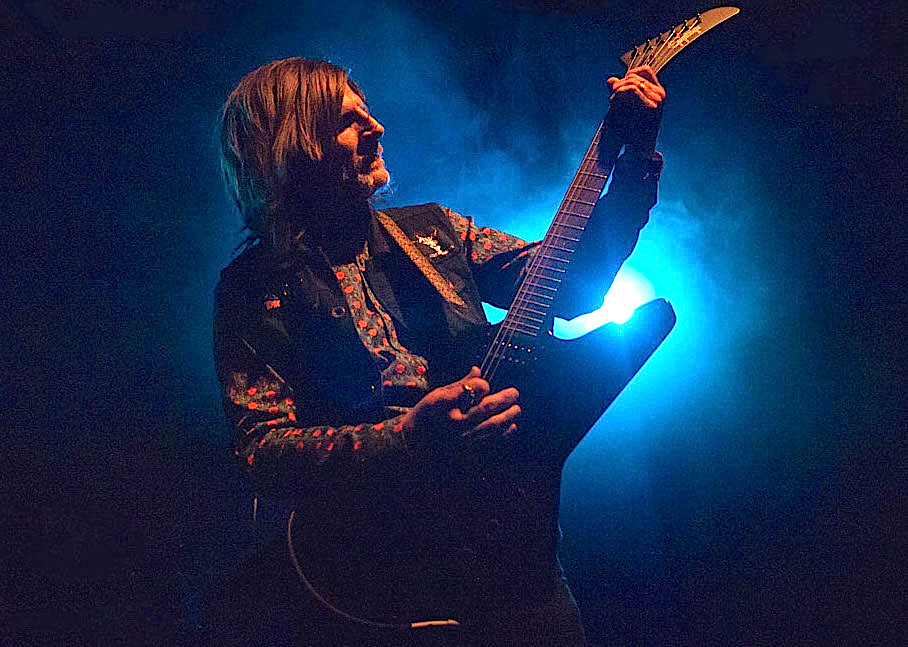 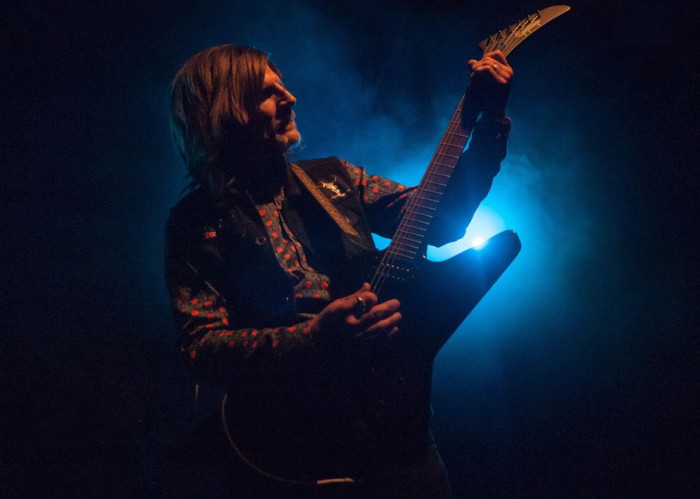 Photo above: Dylan Carlson from Earth at Temples Festival by Emily Power.

When I woke up from the deepest, darkest slumber I have ever had, my head felt as if something had been dislodged, and despite having worn ear plugs, Sunn O))) have left their mark … I hope it’s not permanent. The venue are having the same problems as all the bands – except those playing stage 3 which must end at 9pm – have been moved back an hour due to “structural issues” caused by last nights ruckus. When someone enquired on Facebook as to whether Sunn were responsible the answer was “you’re not far wide of the mark there” – or words to that effect.

On the main stage, ANTA and Ohhms (whose singer Paul will be giving his roller coaster experience of the festival weekend in a special report coming alongside of stream of their stunning new EP in a week or so) prove their more than mere openers, the level of creativity and musicality stunning the afternoon punters. We’ve been singing the praises of the former for some time now, since 2012 in fact, and the chance to see them play Temples main stage was something we’d been very much looking forward to. Things didn’t quite click for us as much as we’d been expecting, mind, leaving us to conclude that there’s something about their visceral, emotive set that gets lost when the band are behind a crash barrier fully 50 feet away and most of the festival’s punters are yet to make their way down. But don’t take my word for it – I met people whose only merch purchase over the weekend was ANTA’s excellent Centurionaut album, and, in my defence, the last band I’d seen, but a few hours previous, was Sunn O))) on the same stage! Clearly time for the days first beer, after which OHHMS utterly dazzled. As the story from Paul will relate it was a miracle he made it on stage, that he did so then put in a such an engaged, magnificent performance reeked of commitment, a sense of occasion and a shedload of honey and lemon.

Monarch slow things down in the best possible way with their minimalistic yet humongous sound ringing every last drop of focus into it. France’s post metallers, Year Of No Light did nothing to change the tempo as their epic thunderous four song set that had the massiveness Godspeed You! Black Emperor (coming to Bristol in Autumn) have, but oh so darker territory. 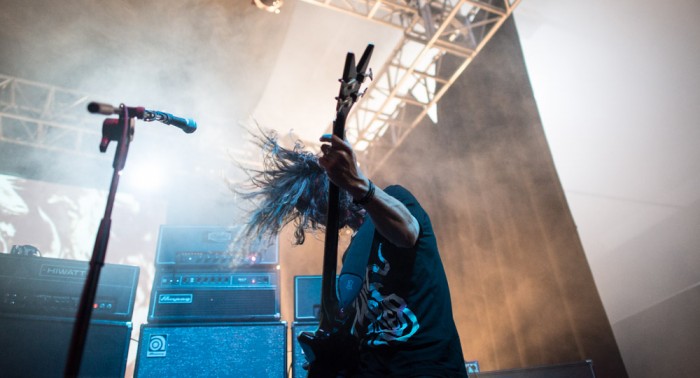 Photo above: Ghold by Emily Power.

After a breather it was time for thirty minutes of heavy and adventurous sludge / doom from two-piece Ghold on the main stage. We’ve seen Ghold numerous times live now, and the impression they’ve left on us has been a little bit more enhanced on each occasion. We got a shedload of abuse for publishing a negative review of their recent Ritual Productions album – the consensus seemed to be that we should have pulled it and our stance as a writer-led organ or reportage be damned. The fact that one of the sites founding cornerstones – our belief in exerting minimal editorial influence on our contributor’s work – would’ve been shot to shit if we didn’t publish reviews that we, as editors, disagreed with, clearly didn’t seen to matter to anyone else as we sat and watched bands we’ve supported for years lay into us. But enough of the sour grapes and back to Ghold’s Temples set, which was blistering; a colossal set of intelligent, boundary pushing even, power and the assembled masses, head banging in unison, clearly appeared to be agreeing with our thoughts that the main stage at a pretty big festival suited the band well. In short, their set was a whirlwind of passion and inferno of rage and we’re pretty sure that even our man who reviewed Of Ruin would’ve liked it … although we’d have respected his decision to disagree with us if such were the case. ¯\_(ツ)_/¯ . 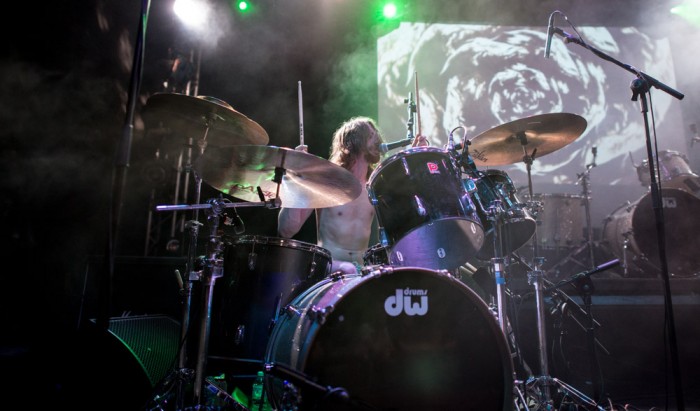 Photo above: Ghold by Emily Power.

Canadian’s Ken Mode kill it on stage 2 as they have been doing solidly now for so many years. The release of their new album, ‘Success’ will seal the deal I am sure as we all got a proper bite of it with their blistering set. The hardcore punk essence isn’t lost when they take it all doomy. New tracks such as, ‘These Tight Jeans’ & ‘Dead Actors’ keep it misanthropic as ever. The new album’s produced by Steve Albini and it marks a change in their sound, it being an homage to their roots, the burgeoning ‘grunge’ and Touch & Go / Dischord scenes of the late 80s/early 90s. The result is an album which some of us think’s their best ever work – and the tracks they played off it here only served to bolster that opinion. 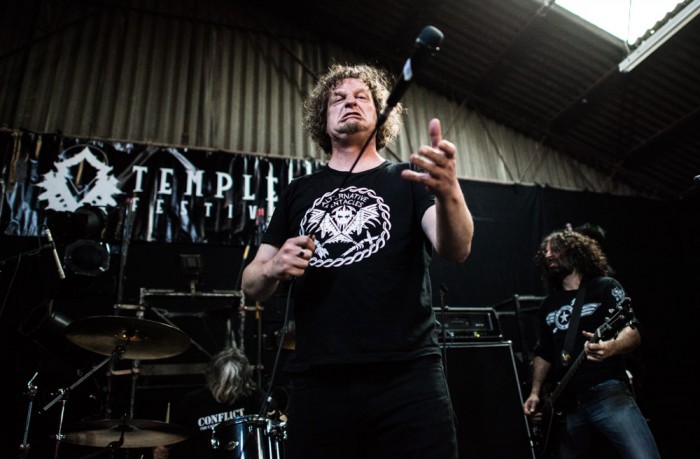 Photo above: Voivod by Emily Power

Voivod’s set slightly clashed with Ken Mode thanks to the two main stages being pushed back an hour, but as I wandered throughout the venues and courtyard filled with heavy folk of the finest calibre I could hear Canadian legends Voivod’s progressive metal going down well on stage 3. Set and stage closer, Pink Floyd’s ‘Astromony Dimone’ was a stormer of an ending where Floyd met Speed metal.

Having missed Pallbearer last year when they toured with Yob we weren’t going to make the same mistake today, even though our energy was flagging, and we’re pleased to report that the astonishing set of technical excellence from the Little Rock, Arkansas doom band made us totally forget any weariness, and even granted us our, ooh, fifth I guess wind of the weekend. Few bands make the twin guitar attack work as well as Pallbearer and it was a joy to behold. 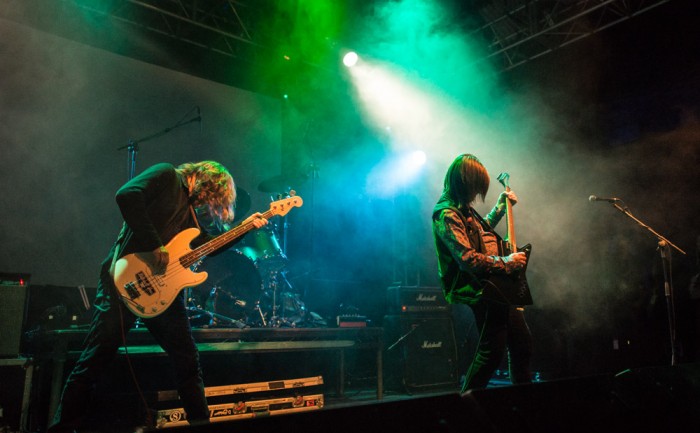 Photo of Earth by Emily Power

The reverence for Earth and Dylan Carlson (see our interview here) is pretty strong in the room tonight, a man who has managed to have a flourishing career producing some of the most groundbreaking drone albums as well his solo and side projects. Introducing the band in his inimitable high-pitched North West US accent after the first track, ‘There Is A Serpent Coming’ he holds aloft his guitar as he strums away, channelling its power. They move through the set like an ocean, delicately driven by the waves of riffs that crash on the audience’s heads like barrels of baptising notes.

The hour and a half long set also compromised of, ‘There Is A Serpent Coming’, ‘Badger’s Bane’, ‘Even Hell Has It’s Heroes’, ‘The Bees Made Honey In The Lion’s Skull’, ‘From The Zodiacal Light’, ‘Torn By The Fox Of The Crescent Moon’, ‘High Command’ and the encore, ‘Old Black’ and it was a beautifully, albeit relatively subdued, balm of a set to end an impressive three days.

Temples Festival 2016 takes place Friday, 3 June 2016 at 12:00 – Sunday, 5 June 2016 at 23:30 (BST). They put early bird tickets on sale on Monday and promised they’d be raising the bar again. With most festivals we’d consider that hyperbole, but we know Temples festival now – they laugh in the face of bullshitting their punters. When they say they’re going to raise the bar, by fuck are they going to raise the bar. You know what to do, and here’s where to do it.

All photos © Emily Power, whose website is here: emilyspower.com.

All words by Philip Allen & Guy Manchester. More writing by these guys can be found in their respective author’s archives here and here.