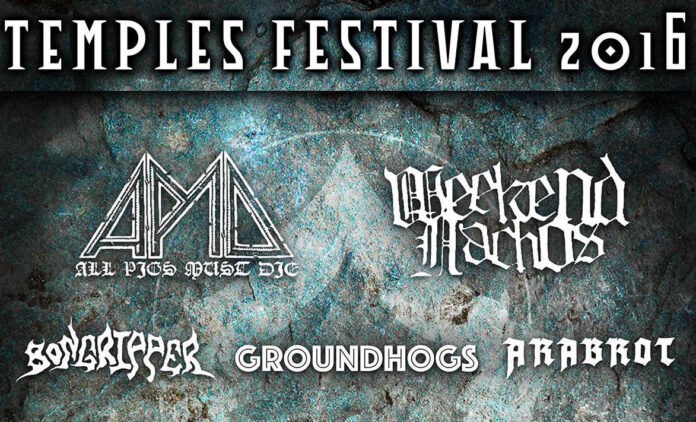 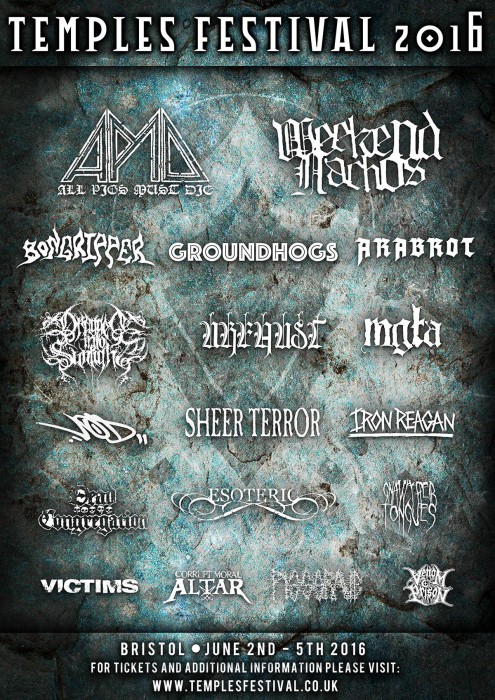 Temples, the fiercely independent (“No Sponsors. No Gods. No Masters.”) extreme and heavy music festival, has made its first announcements about the content of its next edition. Read on for more details.

As first announcements go, it’s safe to say this is a pretty bloody impressive list of bands, albeit no less so than we’ve come to expect from what’s beginning to get a reputation as one of the most well programmed and diverse festival’s of its kind in the world.

So, with no further ado let’s just drop the names, clearly in alphabetical order…

We almost wouldn’t know where to start in talking about that list, except that the Temples Facebook page has made it pretty clear that the patrons of the festival are most excited about Groundhogs – by such a margin that within minutes of the announcement said band’s website had crashed with insufficient bandwidth issues!

For those of you in the dark, Groundhogs are the legendary rock group who, during the 70s, had three Top 10 LPs in under two years. The same band played Roadburn in 2008 and all reports (not to mention YouTube Videos) suggested they killed it, so to describe this as a baller move by the festival can only be considered an understatement.

Over in Louder Than War land we’re stoked to see Dragged Into Sunlight have been invited back – they were our highlight of day three at the inaugural edition of Temples Festival where they played a set we’re still not entirely sure we’re recovered from yet. It’s also not failed to escape our attention that Gnaw Their Tongues, a brilliant band in their own right, are also on the bill, something very relevant as back in May it was announced that DIS and GTT are collaborating on a new release due out later this year. Here’s DIS’s statement about said release…

“Expect a vortex of audio madness inspired by the likes of Godflesh, Merzbow, Napalm Death, Terrorizer, Mugwart and Esoteric, and of course our good friends Gnaw Their Tongues. More soon.”

Considering DIS arent exactly one of the most prolific bands in terms of new music (their last release as 2012s vicious album Widowmaker) expectations are high not only for the release but also, now, for a joint set between these two giants of the extreme music scene, alongside individual sets too ideally because Francis Mace, Temples head honcho, has taught us that sometimes our dreams really can come true if Mr Mace has a hand in things.

It seems redundant our picking further highlights from that list as there’s not one that doesn’t set our pulses racing. We’re not too proud to admit that we whimpered a tad when we saw the list too.

IMPORTANT NOTICE: with the three headline artists yet to be announced now would be the perfect time to grab yourselves tickets. Last year sold out a long way before the event kicked off so all we can say is “you have been warned”.

Tickets are available exclusively via templesfestival.co.uk and the festival runs over the weekend June 2nd – 5th.