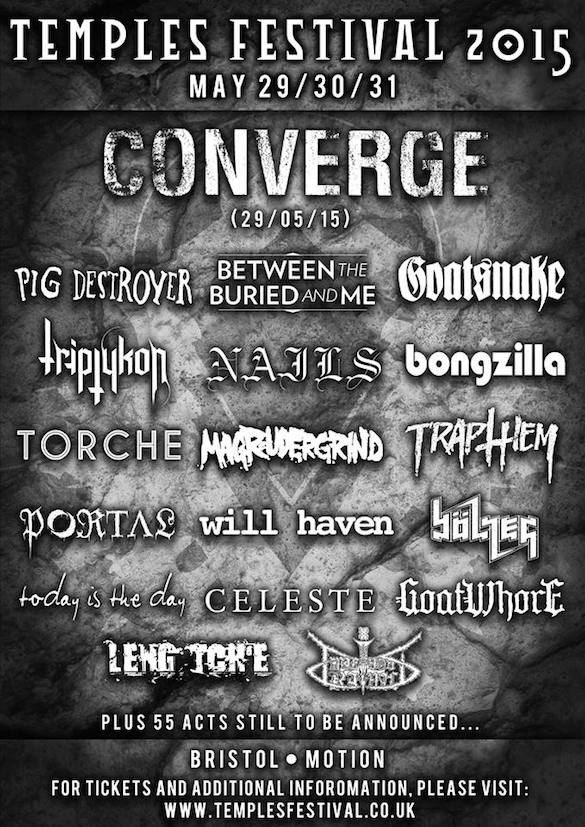 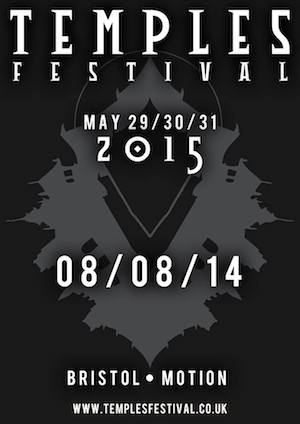 It may seem weird to be talking about festivals that aren’t taking place till spring 2015 whilst we’re still in the midst of summer festival season 2014, but Temples Festival is no ordinary festival – this is the festival which, in their inaugural year, put on such an astonishing lineup we couldn’t condense the good things we saw into less that 7000 words spread over three pages (page one here.) And now they’ve made their first announcement about Temples 2015 and already it’s looking good – check out the news below.

Well they warned us that Temples 2015 was going to blow Temples 2014 out of the water and of course we believed them because this is a festival that not only puts the audience first but also doesn’t practice the hyperbole and bullshit that most festivals wallow in. But I tell ya, it was hard to believe them so good was Temples 2014.

So how do you beat a festival that had Neurosis, Electric Wizard and Clutch as headliners? Well, the first announcement came on Friday and already our breathes are a little taken away as we get an early indication into how they’re going to pull that promise off.

The first, Friday night headliner has been announced as Converge – the legendary (and taking a leaf from Temples book, that aint hyperbole) US band who’ll have been together for 25 years in 2014 and who pioneered the art of blending extreme metal and hardcore punk to produce some of the most genius, bludgeoning music of the last two and a half decades. The band’s fourth album, Jane Doe, is rightly revered and it’s considered one of the most influential of releases amongst fans of heavy music and not alike, with it’s blend of brutal, feral intensity mixed with extreme technical brilliance and drenched in emotion.

Can you tell we’re excited?

The first announcement also informed us that Temples is going to host a reunion of Wisconsin stoner metal band Bongzilla, who’ll be celebrating their 20th anniversary in 2015.

Add in names like Nails, Trap Them, Goatsnake, Triptykon, Pig Destroyer and those others you can see in the poster below and you have your first announcement from Temples about 2015. Savage stuff.

And remember there are still an additional 55 artists yet to be announced, including both Saturday and Sunday headliners.

The festival will this year be boasting a third stage too and if course it’ll be sticking to the well-programmed & diverse selection of heavy music they greeted us with in 2015.

Weekend Tickets are now available from templesfestival.co.uk. Day Tickets will not be released until later in the year.

Temples Festival 2015 takes place over the bank holiday weekend of May 29 / 30 / 31 and will again be housed at Bristol’s Motion skatepark.

In the words of Temples HQ:

“This truly is shaping up to be something monumental.”