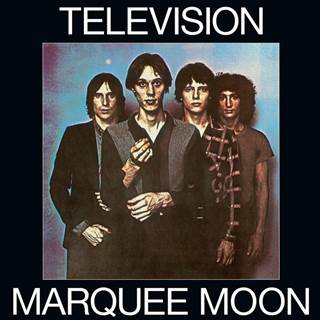 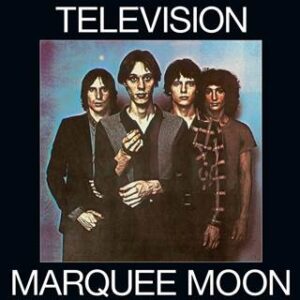 How do you improve on perfection? You don’t, obviously, because you can’t. The best you can do is to repackage it and put it on coloured vinyl with an extra disc of goodies. That’s what Rhino Records have done with Marquee Moon.

Behind that famous Robert Mapplethorpe photograph of the band, now printed on a matt sleeve, are two blue discs. They’re made of vinyl but what’s inside is pure gold.

The first is the original 1977 album in its entirety, unaltered, unremixed, untampered with in any way: because it was just right in the first place (or, technically, the second place, following the disappointing aborted Island Records version overseen by Brian Eno and Richard Williams that’s floating about on YouTube). The second disc contains Television’s first single Little Johnny Jewel from 1976 (when the song was divided into two halves to fit the seven-inch format), now rejoined at the middle, along with a trio of alternative takes and an instrumental.

For those of us old enough to remember its initial release, Marquee Moon was an unforgettable landmark in music history, a rare jewel from a much-hyped punk scene in New York that we read about with envy each week in our Sounds and NMEs. In early 1977 some of us, fired up by visits the previous year from Patti Smith and The Ramones, were already following The Sex Pistols, The Clash and The Damned, but record contracts were thin on the ground in the UK and we looked across the Atlantic for inspiration.

The only punk albums released prior to Marquee Moon were American: Patti Smith’s 1975 debut Horses and the first Blondie and Ramones albums. Looking back now, they have little in common with each other, or with any modern-day notion of ‘punk’. The debut by Television, who formed back in 1973 with Richard Hell on bass (and had previously played as The Neon Boys) had even less in common with their fellow travellers beyond a shared history of playing at downtown club CBGBs.

Listening to it now, in many ways Marquee Moon is the very opposite of punk: a carefully crafted creation filled with lengthy guitar solos (an aberration for the Class of ’77) by not one but two lead guitarists (Tom Verlaine and Richard Lloyd), harnessed to a jazzy rhythm section (drummer Billy Ficca and bassist Fred Smith, once of Blondie, brought in to replace Richard Hell in 1975) and a singer whose odd yelping voice and esoteric lyrics, were inspired more by French fin-de-siècle poets like Rimbaud and Verlaine (hence the name change from Tom Miller) than punk’s preferred subject matter of the disintegrating world around them.

Yet, delve deeper and you can see the connection. Like Talking Heads – another atypical product of CBGBs – it’s filled with a tension and nervous energy that crackle from its grooves, with an urgent vibrancy that’s a far cry from other duelling-guitar bands of the time like Lynyrd Skynyrd. At the same time, you can trace a line (as the NME’s Nick Kent did) from Verlaine and Lloyd’s guitar sound all the way back to Barry ‘The Fish’ Melton  from Country Joe & The Fish and our own folk hero Richard Thompson in his Fairport Convention days.

So when Marquee Moon arrived, it was an Event. Forty-plus years later, I can still remember Nick Kent’s NME review as if it were yesterday, with its opening words: “Cut the crap junior… and put the hyperbole on ice.” Over at Sounds,  Vivien Goldman agreed: “An obvious, unabashed, instant classic.” So does it stand the test of time? The answer is a resounding yes: Marquee Moon is so brilliant, so different, so uncategorisable, so strange compared to anything else of its time (or since) that it’s unarguably one of the greatest debuts of all time; and arguably one of the best records ever.

From the growling guitar riff that opens See No Evil, with its rolling bass, irregular drumbeat and curlicues of lead guitar, it grabs the listener’s attention, while Tom Verlaine’s odd, strangled vocal sets out a manifesto right at the start: “What I want I want now / And it’s a whole lot more than anyhow.” You’re still recovering from the fluid virtuosity of the first guitar solo (helpfully notated on the sleeve to tell listeners which speaker is Verlaine and which is Richard Lloyd) when the album hits its first peak with Venus, a song of such stately beauty and lyrical invention (“You know it’s all like some new kind of drug / My senses are sharp and my hands are like gloves / Broadway looked so medieval / It seemed to flap  like little pages / I fell sideways laughing with a friend from many stages”) that, like the famously one-armed Greek statue of its title, it deserves pride of place in a museum, to be admired for time immemorial.

There are no weak points in Marquee Moon but on vinyl its peaks can be better appreciated: after the beauteous guitar arpeggios and playful innuendo of Fiction (“I start to tell the tale / You complain of my dic-tion”) , side one closes with what will always be Television’s masterpiece. The title track of Marquee Moon is simply unsurpassably magnificent, from its unforgettable reggae-like twin-guitar opening and pulp-fiction lyric (“I remember how the darkness doubled / I recall lightning struck itself / I was listening, listening to the rain / I was hearing, hearing something else”) taking us on an epic journey involving Cadillacs in graveyards and mysterious men at railroad tracks dispensing philosophical advice, punctuated by extraordinary guitar solos from Verlaine and Lloyd.

Side two opens with the stop-start guitar figure of Elevation, and contains the two newest tracks written  especially for the album: the slow, languid Guiding Light with its glissando guitar finale, and Torn Curtain, an even slower, statelier song showcasing the quieter, more reflective side of Television that would be explored on their second album Adventure, closing with the guitar that gently weeps over the valedictory lyrics (“Rolling back the years / The tears I’ve never shed”). Between them lies Prove It, its pretty guitar figure presaging another pulp fiction lyric (“Prove it / Just the facts / Confidential / This case / That I’ve been working on so long”) before ending, perfectly, with Verlaine announcing decisively and definitively: “This case is closed.”