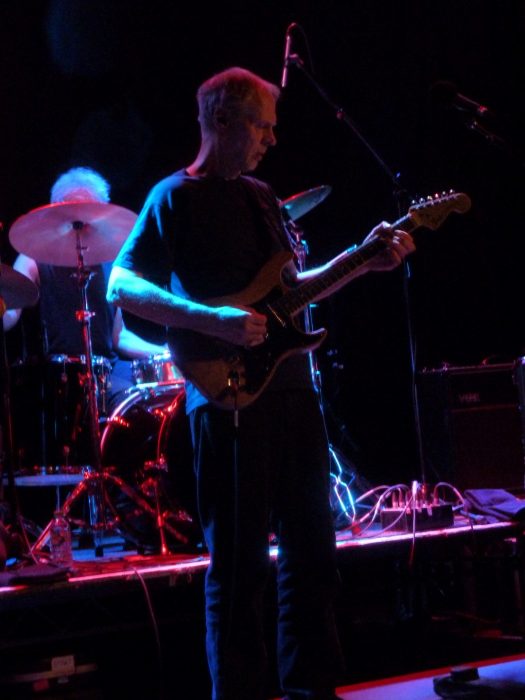 So there they are, Television.

Finally after all these decades of chasing them around the planet I finally get to see this band, a band whose occasional albums I have loved for decades. One of the founding fathers of new wave or whatever we have to term it are back in Manchester and they don’t disappoint.

In fact this a band in full flight. They may be approaching 70 now and have that calm and measured demeanour of rock vets on the endless lap of honor but they still create a beauty and jagged art that hypnotizes. Dressed in black with carefully poised trilbies and well worn guitars the band flank the lugubrious and languid frontman Tom Verlaine framing his perfect pieces of New York art rock. Vet status suits them – formed in 1973 they were always like older brothers who looked like they had lived a bit, after all this is the band that had told off former member Richard Hell for jumping around on stage before he exited to live out his poetic rock n roll dreams in the Heartbreakers and then his own Voidoids.

They were never a wam bam band, never as unseemly as a sweaty trad rock outfit. This was a band that dealt in interlocking guitars, free jazz, psych rock and street wisdom. They were already grown up when they were young. They may have indulged in the scuzz of mid seventies New York City but they looked like the read books and did poetry and jazz. They seemed hip and cool and part of a new language of rock before it was codified into punk rock which fatally narrowed all the possibilities.

They may have been contemporaries of the wonderful Ramones – both sharing the CBGBs stage that Television built with their own hands in 1973 to get a gig in the now legendary venue but musically they were poles apart.

They only thing they shared with fellow travelers and, perhaps this is key to this story, was a love of stripping away the artiface, The Ramones famously did this to a1234 perfection stripping everything away to a sandblast perfection. Television may have had a lot more notes but none of them ever goes to waste and their wonderful creations are as effective and timeless now as they were in the seventies. Their debut two albums still sound as stark and modern as when they were first released, 1977’s Marquee Moon and 1978’s Adventure sound fresh and new then and constructed a template that so much of post punk borrowed.

New ish guitar player, Jimmy Rip, joined the band in 2007 and takes on the Richard Lloyd role and it’s to his credit that he plays seamlessly – this is no normal set of guitar lines to slide into – the two guitars casually switching from rhythm to lead are the very core of what this band is about and to somehow take on this mantle and yet add your own personality to it takes some doing.

They start every song as close to an off kilter normal as possible with some of Tom Verlaine’s distinctive high pitched banshee wail voice – a voice of fragile and poetic beauty creating a ghostly atmosphere around the quicksilver melodies before veering off for the free form outros. Spending the last two thirds of the song deconstructing the riff and the song itself in a guitar breakdown that is more than a nod to the free jazz and free form adventures of the Velvets that was always so much part of New York’s core.

It’s very artful but also beautifully intoxicating, you get truly lost in this transcendental guitar play that is their trademark and also their key influence on so many bands in the post punk era that Television helped to create a new language for.

It’s impossible to place a band like this, a friend of mine yells that they are the King Crimson of punk rock and their unique position as pioneers of proto post punk makes them stand out all alone. In the end all they shared with the revolution was short hair, an angular cheekbone cool and a new attitude to making rock n roll, like Patti Smith they could be the pinnacle of the post sixties journey or the pioneers of the punk rock new wave. In the end it matters little as those guitars begin to soar into the stratosphere still dripping razor sharp tension and release and those golden melodies pour out with their unique and thrilling tone and the band get locked into one of their time less grooves, it’s captivating stuff. Eternal stuff that still sounds to edgy in 2016 as it did in the legendary mid seventies New York.