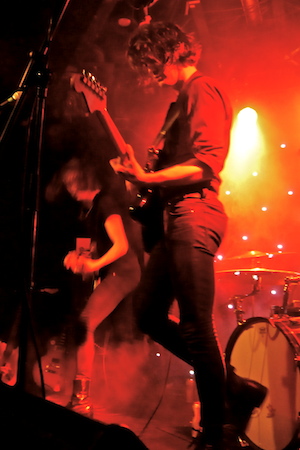 Fast-tracked into notoriety by friends Charlie Boyer & The Voyeurs and Toy, members of which blend into tonight’s crowd, Telegram played their first radio session with 6 Music’s Marc Riley after a mere two gigs and zero press exposure. By anyone’s standards it was premature, but once those opening bars of debut single Follow had thundered across the airwaves their status as one of the most promising new acts of 2013 was sealed.

Nearly a year on and with several dozen gigs under their belts, they strut onstage to find a packed White Heat waiting to be impressed. It’s petty, but it’s pleasing to see that Paul Lester of The Guardian’s “Telegram look so indie you could slap a photo of them next to the dictionary definition of the term” comment doesn’t strictly ring true. In reality, their image is more an amalgamation of all rock subgenres and eras this side of 60s psychedelia, flared jeans included.

Things begin surefooted enough with the feisty Rule Number One and It’s Not Very Easy, a title that proves unfortunately prophetic as a subsequent pedal-board malfunction halts the set for what feels like hours (but is perhaps more accurately ten minutes). “The last song we played is called It’s Not Very Easy, and it’s proving to be the case,” jokes frontman Matt Saunders, though once the fault has been rectified he misses a trick not mentioning that we have been kept waiting, literally, for Eons.

While Siouxsie and The Banshees fed through a wah pedal would serve as a fair default description of most of their songs, to stop there would be denying Telegram what makes them an exciting prospect. They might not be reinventing the wheel, but like any car worth ogling they appropriate it with a healthy amount of style.

Follow evokes Stereolab at their most aggressive while upcoming single Regatta comes across like a Libertines track ghost-written by Syd Barrett (if you use your imagination a little). Set closer Folly, meanwhile, sees guitarist Matt Wood and bassist Oli Moon’s past ventures in tribute act Proxy Music bleed into the present.

Technical faults aside, Telegram are as sharp as they come, and tonight they prove their worth far beyond just that of a band with the right connections and a wardrobe to match.