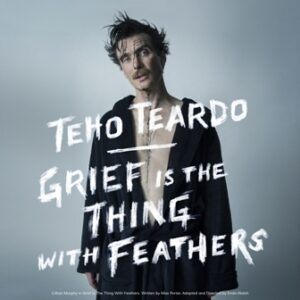 Teho Teardo: Grief Is The Thing With Feathers

Acclaimed composer Teho Teardo has released his score for the stage adaptation of Max Porter’s novel Grief Is The Thing With Feathers. Simon Tucker reviews.

What a fine time we find ourselves in. That may be hard to believe given our current….situation but look around you and look at the art world. There are artists out there tearing down boundaries and stepping over invisible barriers. Worlds are colliding. The avant-garde is seeping beautifully into the public domain. Each month is seeing the work of scoring and composition for film and television becoming ever more popular. The reason? Well we don’t live in such tribalistic times (in the art world anyway). People are not rigid in their tastes. We are open to experimenting more than ever. Another reason lays in the basic fact that there is just so much great works being created for film. stage and television that they simply demand our attention. The score is now as important as the concept album. Musicians from every corner of the world of popular music are trying their hands at composing. There are dedicated websites and wonderful writers who focus on the work of film / stage  / television music (one fine example being the writer Charlie Brigden)  Why is this relevant? Why do I take up so much space at the front of a review talking about this? Well it’s because Grief Is The Thing With Feathers is no mere collection of tracks culled from a stage show. It is not novelty or gimmick. It is a passionate and stunning work that deserves to be heard by many people especially those with a fondness for dynamics, passion and beauty in their listening hours.

The background goes like this; Inspired by Max Porter’s award winning novel, Grief Is The Thing With Feathers (2015), Teardo composed the album soon after reading the book and a month later the Irish writer and director Enda Walsh (co-author of David Bowie’s Lazarus theatre production and Steve McQueen’s Hunger) and a long time collaborator confided to Teardo that he wanted to stage an adaptation of the novel.

In a very short time, the album and stage show were complete and the production premiered in Galway, with Cillian Murphy (Peaky Blinders) giving an astonishing performance on this heart-wrenching meditation on love, loss and living. Now we of us who were not able to see the stage show get to hear Teardo’s music and it is not only a pleasure but an honour as he has created a work that is crushing in its emotional punch and one that is unafraid to reveal the bruised heart at the centre of its subject matter.

The magic Teho injects into his score helps highlight the novels main themes of grief and survival. It is a powerhouse of a work that is dark and oppressive when it needs to be and light and positive in other moments. Opening on the deepest bed of cellos that are guttural and monolithic ‘A Bit Of Ghosts’ sets the narrative aim instantly as it grabs your gut and twists them before allowing the voice to enter all scattered and fractured (anyone who has lost a loved one will instantly connect with that feeling of being surrounded by voices talking but you yourself not hearing anything…Thom Yorke’s “fridge buzz”. Just as the piece threatens to tip into more extreme side of experimental composition strings swoop in like the crow itself lifting you up out of the surrounding noise of people trying to comfort you and taken you to a place of secluded security and peace.

Grief Is The Thing With Feathers tells the story of a crow, two motherless children and their father, who is haunted by both terrible and funny memories and Teardo’s music matches the flight and fight nature of this subject matter wonderfully with A Demon Who Fed On Grief marries the strings of Mansell with the throbbing electronics of Carpenter whilst You Fucked A Dentist may be the most gorgeous track that contains the ‘f’ word in it as it enters stage left on a bed of slowly looping strings before slowly creating a menace with heavier instrumentation reminding of the work the Bad Seeds created on Skeleton Tree.

Grief Is The Thing With Feathers is a complex work for complex themes yet thanks to the work of Teardo and the musicians is so recognisable and open to connectivity. One of its most exciting aspects is the way that it manages to keep a sense of rolling waves playing throughout mirroring perfectly the way grief rises and falls within the soul of the sufferer. As I write this the rain is lashing outside and the early morning sky is grey. I am crying and for this I feel grateful to Teho Teardo and his colleagues for this feeling is why I fell in love with music in the first place. That power. That grace. That unique gift a talented artist has at touching our most base needs, ripping them open and making them public. It is through this we heal and I really hope as many people hear this work as possible as it could genuinely help someone through that most horrific of times. There are no more words……