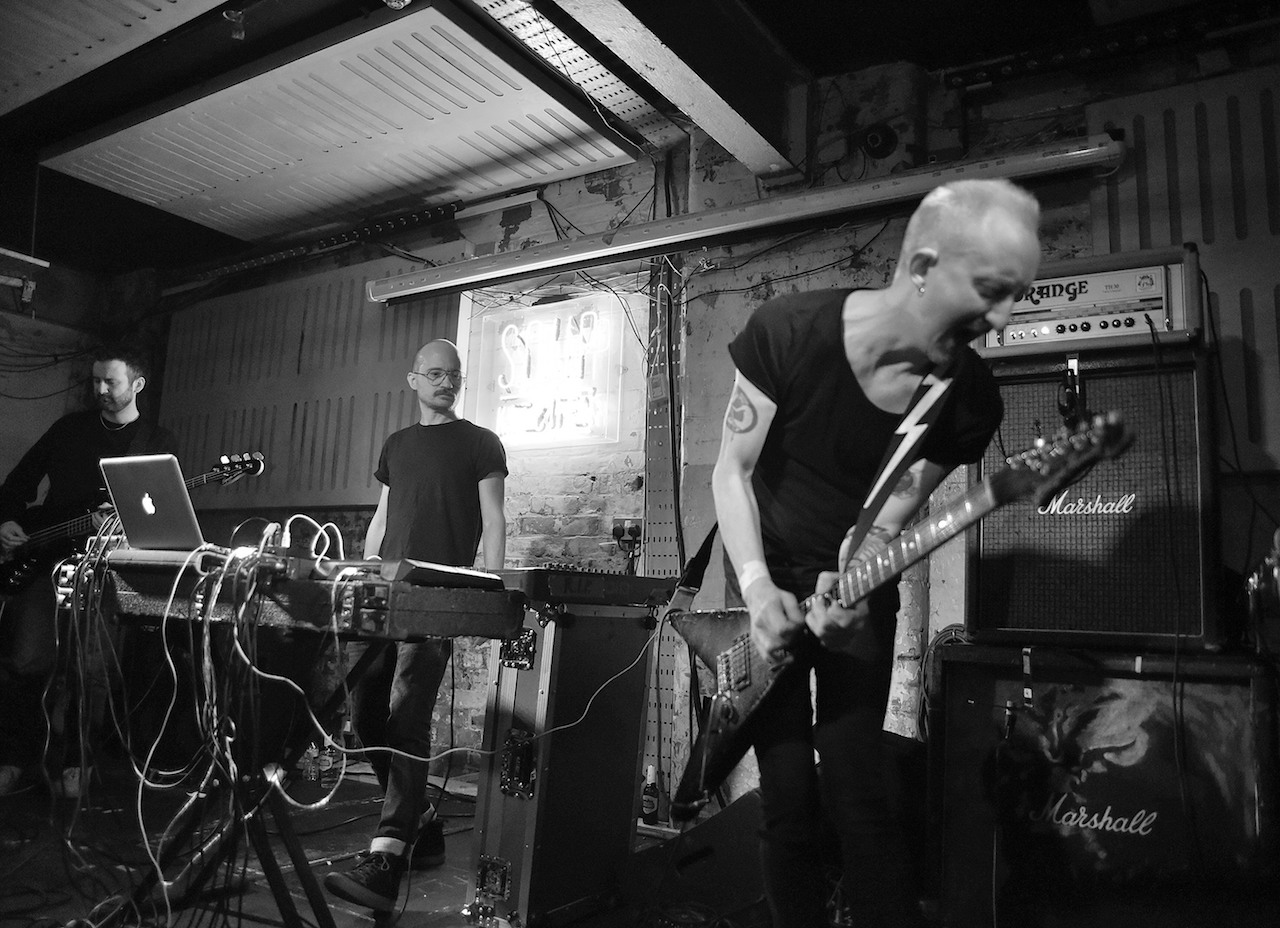 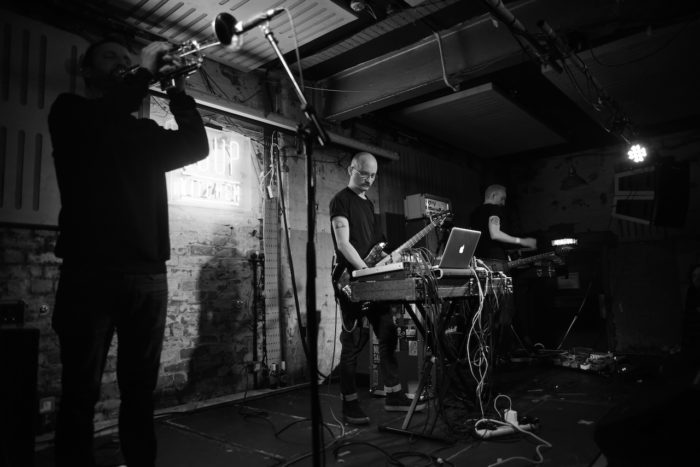 Teeth of the Sea utilise harsh electronics and brass melodies to bring a sci-fi western landscape to a cold Manchester basement. Rhys Delany was there.

We start off with Trianglecuts, the electro-punk duo who are making waves in the new Manchester underground of weirdness (More on this later). Trianglecuts bring an anarchic sound to the Soup Kitchen, a sound far more aggressive than the others on tonight’s bill. Unfortunately, a technical fault is heard in a few songs, which takes hold later on in their set. However, after a few minutes of awkward repair, the duo is back at it, creating harsh EBM rhythms with spectral vocals floating around the room. 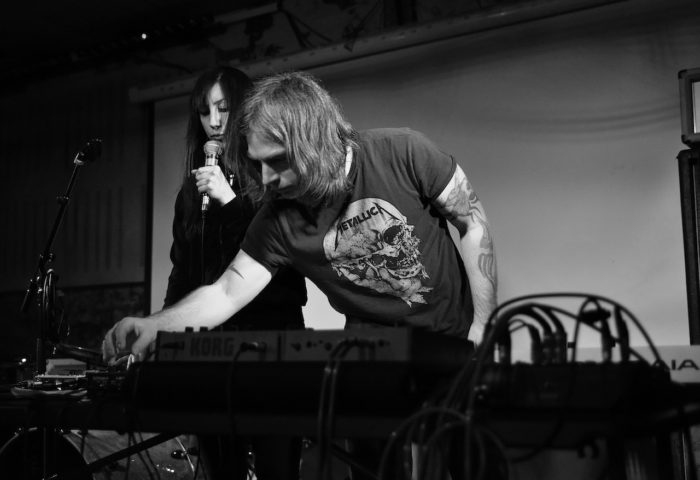 Slow Knife are next up, another name I’ve started to notice drifting around Manchester support slots. As the band set up, you can sense something slightly off. Maybe it’s the suits, maybe it’s the masquerade ball mask, maybe it’s the theremin/harmonium combo. Either way, you know something interesting is about to happen. Slow Knife play a short but impressionable set, a set that adds to the eerie nature of the night. They bring with them a volatile sound that can be felt in the previously mentioned Manchester underground scene. You could easily see Slow Knife compared with the likes of ILL or Mold and can be sure to see them sharing billing sometime soon. 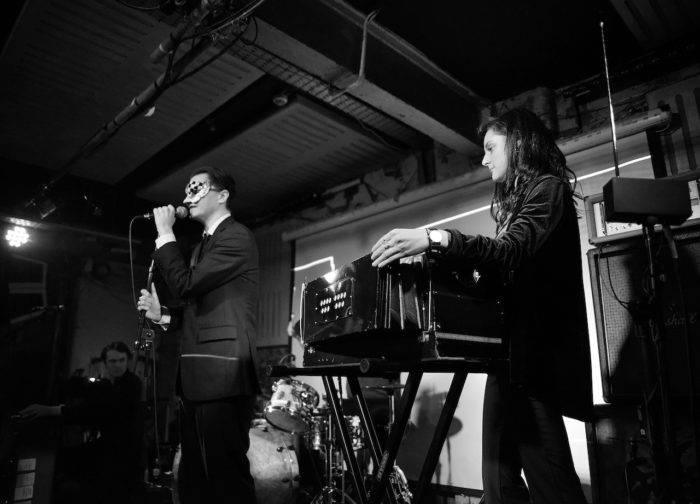 Both support groups were chosen well and it’s good to see the more obscure local talent is starting to get the audience it needs, support groups are a vital foundation in any music scene. Trianglecuts delivered on bringing the harsh electronic rhythm, while Slow Knife added to the creepiness that if both were to combine, they would birth Teeth of the Sea.

Earlier this year Teeth of the Sea released their fifth LP, Wraith. Much like the title suggests, the album carries with it an ethereal essence, one of transcendence. Teeth of the Sea manage to create vast soundscapes, which is why they have recently announced a collaboration with Appolo’s Moon Shot, where they will be performing a live score of completely new music.

As the band take to stage, there is an ominous presence, as to what will happen next. They open with the soft synth lines of Our Love Can Destroy This Whole Fucking World, with this song, Teeth of the Sea, have set up an atmosphere that is both quaint and soft, with a willingness to do whatever they want.

In quite the contrast the trio later opts for the more danceable, and techno inspired tracks, such as Gladiator’s Ready. An excellent showcase of the power of the synth set up that sits centre stage. Mike Bourne stays focussed as he manipulates the sounds that echo around the crowd. 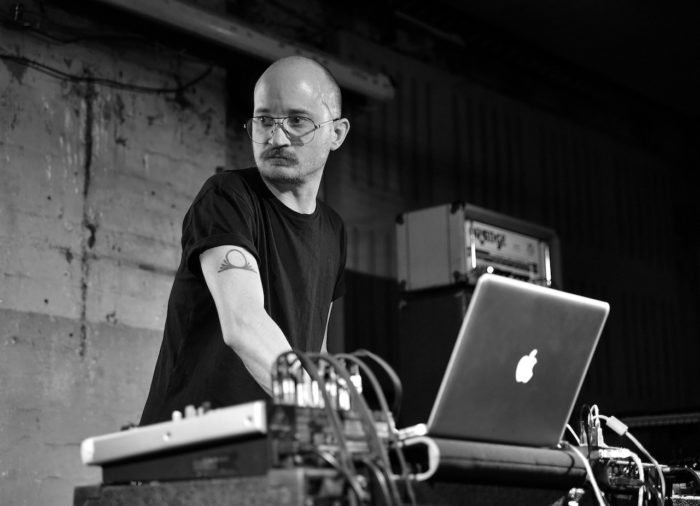 Arguably the more popular tracks on the album are Hiraeth and I’d Rather, Jack, therefore it’s easy to expect these songs to appear. I’ve never been too fond of I’d Rather, Jack but Hiraeth piqued my interest every time I heard it. The Welsh translation for the title is ‘longing for home’, an appropriate description of the music created. The trumpet of Sam Barton on this track echoes around the room, meandering around Bourne’s synth waves, the brass conjures images of rambling through unfamiliar territory, longing for home, forever unsure of where you may end up. The guitar adds an eerie western feel to this intergalactic mysticism. Teeth of the Sea play these long ethereal jams that slowly stride through genre and emotion, and execute them with nothing less than precession.

Throughout the album, I was enamoured by the trumpet which gave me hope as I listened, forever yearning for something more. But after seeing Teeth of the Sea, I feel as though I missed the importance of Jimmy Martin’s guitar sound and capabilities. He delivers with awkward riffing, throwing his flying V guitar to the floor, and abusing the powers of feedback, all of this shows an influence that feels like post-prog. It has all the aggression and technical ability of the opposing post-punk and progressive rock sound, therefore making for the perfect accompaniment to a discordant trumpet. 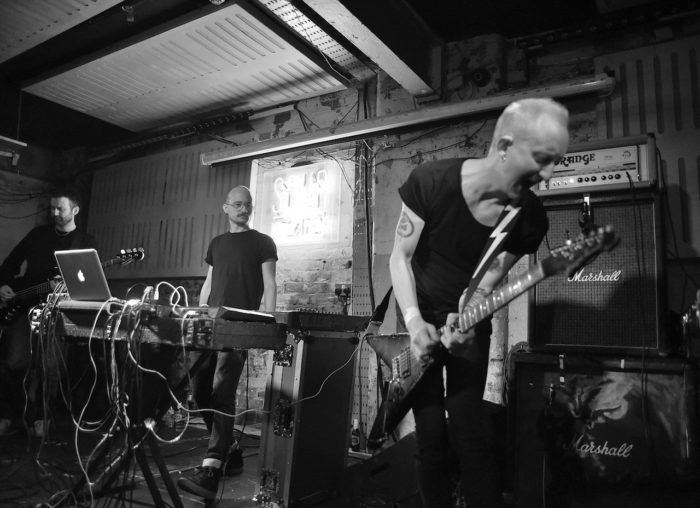 The next song to emerge from the Manchester basement begins with an arpeggiated synth line, which reverbs around the room, creating a dystopian sci-fi sound, reminiscent of Tangerine Dream. This must be the opening to VISITOR, again proving that if they want to play these excessive kosmische jams, then they will.

Teeth of the Sea also play some of their older catalogue of music, some of which coming from the more techno inspired Highly Deadly Black Tarantula album. These moments, deliver on providing a much darker, minimal sound, creating an almost zen-like state amongst onlookers. The trumpet again carries us through an audible soundscape, much in a similar vein to the haunting Cosey Fanni Tutti cornet. The rhythm patterns get ever more primitive, making the performance feel like a ritual, as though a wraith was about to be summoned centre stage.

Even though Teeth of the Sea lack any conventional form of vocal, they still feel as though they have something to say. They are the melancholic soundtrack of a failing political landscape. They are a distant glimmer of hope that change can come. They are enticing, exciting and ethereal.

All words by Rhys Delany. More of his work can be found at his author’s archive.

All photos provided by Steve Hampson. More of Steve’s work can be found on his website here and on Twitter @rangerpeg.