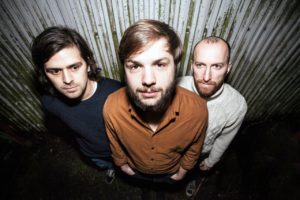 On the eve of the release of their debut album Birthmarks, reviewed here, the Ghent based band have taken time out to pick the ten songs that influenced them to become a band & record the songs that make up the album. They also gave Louder Than War the low-down on who they are.

Who is in the band?

How did you come together as a band?

Joram had been writing songs on his guitar at home. After a while he wanted to get a band together to play them. He knew Bert a little, but mostly from the folky music he was making at the time. After seeing him at a Cloud Nothings concert, Joram sent him some crappy phone recordings. Bert was up for it and they decided to ask Ramses to complete the band on drums. An obvious choice. They were friends and had both played with him before. It clicked: after one rehearsal we had already finished our first song.

Where did the name come from?

We got our name from an awesome song by the L.A.-band No Age. We thought it sounded good, and just went with it.

Who writes the songs? What is your songwriting process?

Joram usually has a nearly finished guitar part that we start out from. Then, depending on the song, we’ll make changes, add or drop parts, until we have a finished instrumental. On top of that, Bert will write lyrics, we’ll play it a couple of times in rehearsal and fine-tune it until it’s done.

We recorded everything live in 5 days over at Lightship 95 in London with the talented Rory Attwell. It was nice to get out of Belgium, without any distractions and just focus on our playing and the songs. We just worked hard every day to make the most out of the little time we had. The five days went by so fast, but we all look back at it as a fun, productive experience and we’re very happy with the result of course!

What’s next for Teen Creeps?

We’ll be playing a bunch of shows to promote the album in the spring, summer and fall. We’re also planning an upcoming UK-trip, so we can come hang out with you guys reading this! We’ve been writing our second album, and we’re planning on finishing that in between the shows and maybe already start recording it.

And so, to the songs that influenced the band/album:

A sonic big bang-moment for me as a 15-year old. “Daydream Nation” was the first CD I bought (just because the store I went to was out of copies of “Nevermind” to be honest), and that main guitar riff kicking in after the atmospheric intro just blew me away, and changed everything from there on

Chad VanGaalen – “Peace On The Rise” (picked by Ramses)

A formative album for me, taking me back to when I just got my driver’s licence. He’s such a fascinating guy, writing and recording everything by himself, doing these amazing videos for his songs. His voice is hauntingly beautiful, and his songs are so delightfully playful and weird.

I remember seeing Yuck play this track on Later with Jools Holland and just immediately falling in love with the whole aesthetic of their sound. They were a gateway to so much of that stuff from the ‘90s that ended up influencing my own band.

I got into recording as an art form through those first Microphones-records. They’re so intricately woven together, so delightfully arranged and recorded. A lot of crashing cymbals, crazy distorted drums and strange nature scenes, but it all strangely fits the song in a more than perfect way. Phil Elverum just creates his own world and context, and that’s something not a lot of people can do.

One of the Hüskers’ finest tracks, writte by Grant Hart. Their productivity, their beautiful melodies played at breakneck speed, the different characters that made up the band, … I pretty much love everything about them. I noticed that I’m gravitating more towards the songs Grant Hart wrote at the moment, because there seems to be more to discover in the arrangements and the lyrics after a few plays. May he rest in peace.

Joram was sending me so much 90s-stuff to listen to, so this one just showed up in my YouTube-recommendations. I love the long, rhythmic (mostly instrumental) parts, and the dissonant guitars, and the cathartic moment when the vocals kick in. An amazing, underappreciated band.

I used to not really like punk rock. I associated it with Sum 41 and high school movies like American Pie. Wrongly of course. This album and its title track really opened that world up for me. It’s still my favourite record of theirs. So good.

I saw Thurston Moore live on his tour for “Demolished Thoughts”, and it was one of the best shows I’ve ever seen. He was playing acoustically, but when he played the songs from “Psychic Hearts” he was taking it to a whole other level. I immediately ran to the closest record store and dived into his solo work and I’ve been a huge fan ever since.

Rise And Fall was the best Belgian hardcore band around back in the day. Me and some friends went to see them all the time whenever they played. They also proved that being from a small country doesn’t necessarily mean you can’t tour the world, be on an awesome American label and be at the top of their roster. Above all, this track is a rager.

Alex G – “After Ur Gone” (picked by everyone)

On our very first tour, we were trying to find our place to sleep in London. As our GPS was screwing us over and we’re getting lost in London, we were listening to Alex G’s “DSU” over and over. I think we must’ve listened to this song 6 or 7 times by the time we finally found the right address. But we didn’t mind at all.

And to finish off – here is the first video from Teen Creeps album Birthmarks, the track Sidenotes:

As told to Neil Hodge