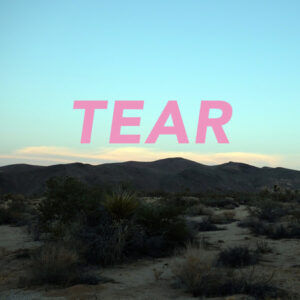 It’s the sense of the vastness of LA, creeping toward the horizon, with which the debut mini-album from Tear opens rather than the stacked dirt and history of their native London. The Sprawl is all endless lights and heat, Patti Smith-esque vocal, and disaffected vibes. It builds both layers of sound and in speed, hinting at the purposeful punk rock across this first collection.

The band signed to Tim Burgess’ O Genesis record label in 2015 and across the course of last year settled into this new line up and guise with festival dates and singles, including those featured on VINYL01. Recorded in two parts – half with Burgess and Jim Spencer at The Charlatans’ Cheshire studio and half at Bark Studios with Victoria Freund – this eight track is a solid introduction to their lo-fi but nevertheless powerful and assured sound.

From The Sprawl we head to Never Fade Away and Nothing You Can’t Have, the rhythm on both taking on a perfunctory tone, the guitar riff snaking under and around the distinctive and sure vocal.

But it is Careless Again which is the diamond among the rough-edged grunge-infused rock. Grief, hopelessness, and the terrible wisdom that comes from loss laid-bare in the lyrics and juxtaposed against the simple melody, a naivety but determination in the playing.

Beautiful, Begging and Waiting Room see the collection out – each picking up the pace and bringing in spikier punk riffs around repeating lyrics, Blues creeping in around the edge of the vocal.

Tear aren’t here to impress with fancy tricks or virtuoso licks, complexity is alien here. But what they’re doing is almost more satisfying for being no nonsense, their imperfections the intrigue and attraction. A band sure of their identity and growing into their sound.

All words by Sarah Lay. Sarah is editor of Louder Than War and you can read more from her in her author archive. You can also find her on Twitter and her wider portfolio of writing on music here.