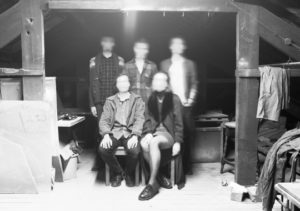 Louder Than War’s Ioan Humphreys has a listen to some more fuzzy, scuzzy, noisy rock from Leeds’ Team Picture.

This epic 6.02 of a track starts of quietly, but slowly and surely it builds up an up with atmospheric and experimental guitar sounds. Lots of feedback, drum rolls, cymbals and subtle noise engulf the listener. Out of the noise comes a gentle guitar riff and pounding drums that spear the shoegaze haze. As the lead singer’s ethereal and otherworldly Siouxsie Sioux esque vocals kick in, you get a real feel for where this band is going with this track.

A heavier bass breaks up the measured noise and at times i swear they sound like the mighty The Telescopes. The bassy riff takes over and it almost becomes prog rocky in its execution. And combined with a nice guitar solo and plenty more guitar noise, this gorgeous track comes to a natural and exhausting climax.

Team Picture’s Potpourri Headache is released on 5th December and will be available on iTunes and Spotify. With a ‘Live At Leeds’ appearance already confirmed and new material aplenty on the horizon, expect plenty more from this emerging five-piece going into 2017. Good stuff.