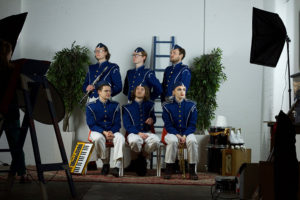 (I Have a) Little Secret

Louder than War’s Ioan Humphreys fears he may be getting soft in his old age with his love for Team Picture’s latest single.

Ahead of the release of their new mini LP Recital (produced by Matt Peel – Autobahn, Eagulls, Pulled apart by Horses) on June 1st 2018, Leeds-based six-piece Team Picture release lead single (I Have a) Little Secret. I’m not new to Team Picture having reviewed their last release here, so I was particularly looking forward to hearing what this lot had been up to recently. I was not disappointed.

(I Have a) Little Secret opens with a clear as water Cure-esque guitar refrain that threads throughout the three minutes. This is very well produced by Peel who gives the band the BIG sound that they grasp with a beautifully controlled gusto.

Ethereal vocals play with the slightly off beat time signature. Throaty synths join in with layered vocals to create a nice big chorus and refrains of “slow down cowboy” and “you’ve got to temper your enthusiasm”. This insanely catchy and uplifting 3.25 is over before you know it, yet you are left with the feeling that Team Picture may be your next favourite band with a whole lot more to come.

6 May | Hit The North, Newcastle

6 May | Sounds From the Other City, Salford

17 May | The Great Escape, Brighton

31 May | The Shacklewell Arms, London