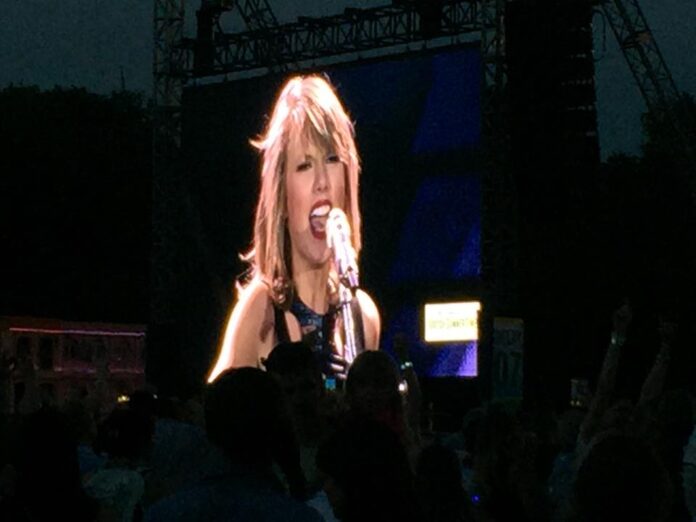 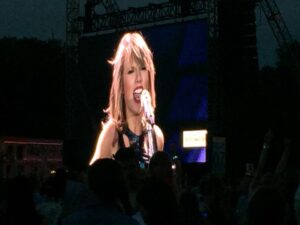 The evening sun is casting long shadows across Hyde Park as 65,000 people get to their feet and raise their hands and voices for Taylor Swift. Bringing the UK leg of her 1989 world tour to a close with a headline slot at British Summer Time, Swift is playing tonight to a sold out crowd as high on the unusual heat of a long summer day as they are at partying to her pop hits.

She kicks off earlier than expected with Welcome to New York and we’re all on our feet, singing her words back at her. There are die hard fans here alongside young kids, making up dance routines and doing handstands as we all wait for twilight to fall and our ‘gift from Taylor’ LED wristbands to start flashing.

Swift’s delivery is assured throughout each track, carefully choreographed routines and staging adapted for the one-night outdoor show. But in-between we see just how joyful and crazy she finds the whole thing, she looks around with a massive grin, laughing at the sight of people, people, people all for her all the way to the sunset.

Blank Space gets an outing early in the set with Taylor playing her own caricature to the max, wielding a golf club and with a glint in the eye delivering it all with an air of strict confidence. A great pop song on record Swift turns it up a notch live, sampling in-song, looping and harmonising with her own vocal line. It takes the song from being a wry dig at who the tabloids say she is, to being focused on what she actually does – perform clever, fun and great sounding pop, perfectly on target.

We get a few refreshed versions of tracks from Red and before tonight too. I Knew You Were Trouble gets stripped back and smoky vocals, a truly broken soul working of the introspective track from her transition album. As it kicks in so does the weight of the song, far heavier than on record and feeling more representative of the lyrics.

Throughout the show Taylor breaks between songs to talk to the audience, sharing how mind-blowing playing to a sell-out 65,000 capacity crowd was for her but more vitally delivering speeches of positivity and inspiration to the fans spending their summer Saturday in the park with her.

While dusk at the end of an all-day festival may not be the best time to deliver disquisition on being your own best friend and audience attention spans may be short, this sort of speech is exactly right from Swift. The address rings with empathy and despite being one of the biggest pop stars in the world right now she is a woman in her mid-20s questioning the same things us mere mortals do. Aside from the subject, Swift speaking like this to such a vast number of people, from a stage set especially for her, is an empowering moment. To hear a young female voice, speaking honestly about being young and female is still too rare. For those of us over thirty the advice may sound a little trite, a little like the gym scene in Mean Girls, but actually being encouraged to not just be kind to each other but kinder to ourselves is something we could all stand to hear more of.

Elsewhere in the show Swift breaks again from the music to talk to us about her love of classic ’80’s movies and happy endings. Clearly a romantic she describes the idea of us all being there tonight as fitting that notion, adoration and devotion forming part of the ideal. It leads to a re-working of her first UK number 1, Love Story, now losing its country twang for the deep synth sound of 1989. The euphoria of the happy ending hits us as a collective tremble – Swift is brave enough to say what we all know; that we’re all hoping in one way or another for our own happy endings.

But these are celebrity obsessed time and many in the audience have been hanging out to find out who she’d put in her Squad tonight – a feature of the tour where she brings on a friend or two to stalk the catwalk as she sings Style. Out to impress, or just ready to party after the show with friends, we’re asked to cheer for Kendall Jenner, Gigi Hadid, Serena Williams, Martha Hunt, Karlie Kloss an Cara Delavigne waving a Union Jack above them all. It’s hard to tell if this is a ‘look how popular I am’ boast parade of modern It Girls or an aspirational view of girl power in praise of supportive friendships.

As we head into the last stretch Swift appears in a sparkling ball gown at an elaborate silver piano to perform a delicate version of the beautiful Wildest Dreams. She mixes in elements of Enchanted and as lights flash on swaying hands a shiver runs down the spine – pop doesn’t have to be superficial, it can be as deep and raw as Taylor makes it while still being catchy as hell.

One Bucks Fizz-rip of the skirt and the confirmation of Swift’s place in pop royalty is clear as she strides along the runway practically glowing in a golden, glittering catsuit as we get a triumphant and yet, again, emotionally vulnerable version of Out of the Woods. Sounding bigger and bolder live, the hollow synths of the record rounded in the open air as we all live through this song.

We’re wrung out as she disappears for one final costume change and we’re taken from shared sorrow to contagious joy with Shake It Off. As the catwalk lifts to slowly spin Swift and her dancers over the crowd the whole park starts to dance, this is the musical chaser to her earlier inspirational speeches. It’s one of those moments where senses all fire at once, grins spread across faces and just as Taylor said she will remember this show for the rest of her life, many of us will look back on it and feel this thrill over again across the years too.

While these are mainly songs longing for the happy ending or lamenting the reality of romantic love, Swift as a pop star is about much more than that. Tonight she creates an intimacy in the vastness of Hyde Park in which the love and support between friends, between families and between fan and artist flourishes and becomes the celebration we all share. She may oversell the positive affirmations at times but she embraces and enjoys her role on stage with both humility and confidence.

With the 1989 tour, like the album, Swift becomes the pop star we all need – honest and breakable, hugely melodic and lavish with her production.

The 1989 World Tour continues with two dates in Dublin (29 and 30 June) before heading to the United States, Canada and Australia throughout the rest of the year.

All words by Sarah Lay. You can find Sarah on Twitter and read more from her on Louder Than War here.