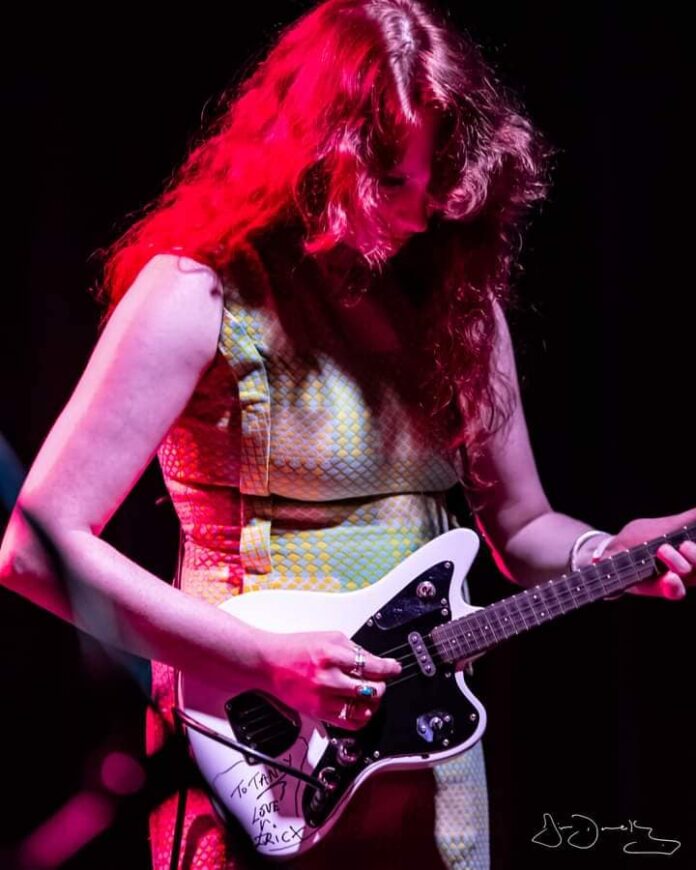 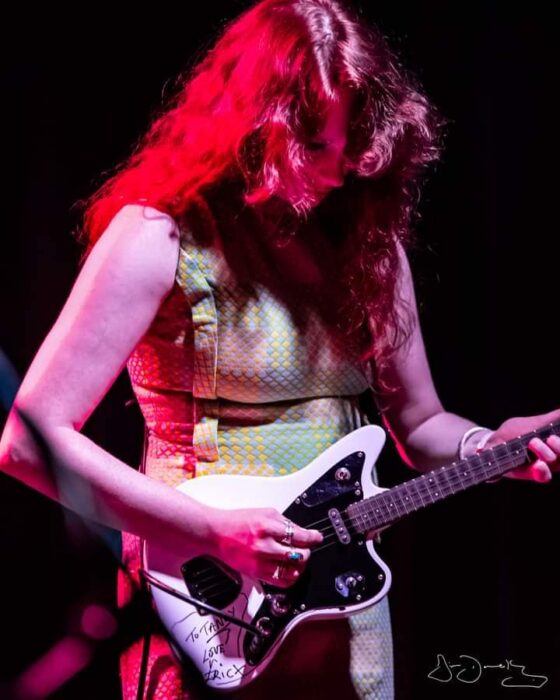 Tansy McNally: The Blue Orchid with the Electric Ukulele: as told to Ged Babey

When post-punk psychedelic veterans the Blue Orchids released their superb new album Speed The Day they quietly announced they had a new band-member: Tansy McNally on electric ukulele.  Onstage at recent gigs she cuts a noticeable but shy figure, because she is probably less than half the age of some of the other band members and it’s a pretty unusual instrument she plays.

‘It looks like they’ve persuaded one of their daughters or nieces to join the band‘ someone said to me, not meant unkindly.

As Martin Bramah said when I interviewed him, the Fall and Blue Orchids originally always had a female presence in Una Baines.  ‘Having a young feminist in the band helped to temper our more laddish leanings’.

I wanted to find out more after seeing them play a storming set at the Thunderbolt in Bristol, so I emailed just two questions to Tansy. These are the replies.

Why is the electric ukulele your instrument of choice and where did you get it?

I’d started taking a serious interest in music around that time and was obsessed with 50’s and 60’s music and rock n roll – the likes of Chuck Berry, Buddy Holly, Lonnie Donegan, Donovan, Dylan, The Velvet Underground, garage rock, The Beatles etc. (Punk and The Fall came a bit later but that’s a whole other story.)

I was also introduced to George Formby when I was 15, thanks to my Grannie’s brother. So, I decided that I wanted to learn ukulele and set about mastering the George Formby syncopated, split-stroke. I also wanted to play like the rockers I loved, mainly Buddy Holly, Chuck Berry and Eddie Cochran, so I also went about learning how to play like them by ear, sitting in my bedroom, playing along to their songs.

Unfortunately, the guitar has never been something that I’ve been able to master and I can only play one chord (a D because it’s the same configuration as G on ukulele.)

For years I wanted a solid body ukulele that was like an electric guitar but it was never an option, although I did tinker around with guitars, trying to get them to play like a ukulele.

Then about 7 years ago, I came across a guy in South Africa who makes solid body electric ukuleles in the format of Fender Strats and Telecasters. His name is Brian Fanner and he’s a true artist when it comes to electric ukes. (website)

I contacted him online and asked if he could make me a custom electric uke. I was split between two designs – I either wanted a black Rickenbacker like John Lennon or a white Fender Jaguar like Rowland S Howard. (Rowland won out in the end.)

My Jaguar has served me well and I love it to bits! (I do need another electric ukulele for gigs in case something goes wrong, you never know.)

Brian did a fantastic job and he now does a whole line of Jaguars (he calls them Ocelots) but mine was the first one he ever made.

My Jaguar is also extra special after it was signed by Wreckless Eric after I met him on his tour of Melbourne a few years ago.

How did you come to join Blue Orchids?

When I was in Melbourne, I had my own radio show called Rebellious Jukebox on a station called 3CR. I did that show for 3 years and played all sorts of odd songs, mixed in with radio plays and funny recordings that I made in my bedroom.

My favourite bands of all time are The Kinks and The Fall, so when Mark Smith passed away in 2018, I decided to do a tribute show.

I contacted a few Fall members on Facebook and asked if they’d like to contribute something. Una Baines, Funky Si and Martin Bramah replied and kindly contributed songs, anecdotes and in Si’s case, an interview.

I was already a fan of Blue Orchids too and played their music on my show a fair bit. I stayed in contact with Si, Una and Martin, albeit from a polite distance. Every now and then, Martin would send me recordings of newer Blue Orchids albums to play on radio and they were always received well.

When I moved back to the UK in 2019, I started playing with a group of lads I’d met online. They had this idea of forming a punk band and were looking for a guitarist. I met them, had a jam and recorded our first session. For some reason I decided to ask for feedback (which I don’t normally do). I’d never really been in a proper band before, I’d always just played on my own at home and only started jamming with a good pal (and brilliant guitarist & songwriter) in Melbourne just before I moved back to the UK. I thought to send my new band recording to Wreckless Eric, as he and his wife had helped me move to London where I was based at the time.

However, my intuition told me to send it to Martin Bramah instead, even though we’d not communicated online that much. Martin said that he liked what I was doing and suggested I come up to Manchester for a jam.

At first I brushed it off, thinking that Manchester was too far away and that it wouldn’t work. But after telling myself that I’d already come all the way from Melbourne, 2 hours on the train was nothing – plus, its Blue Orchids for God’s sake! I’d be an idiot to turn it down.

So, two weeks later I was in Manchester, meeting Martin at Piccadilly Station. After giving me a tour of Prestwich, we had a pint and drove to Salford to meet the lads. I don’t think they knew what to expect but something must’ve worked as I moved up to Manchester and I’m now in the band – I even recorded an album and designed the sleeve art for them!

I’ve always wanted to be in a band but to be in one with one of the people who was vital in forming my favourite band (The Fall), plus a line-up of other brilliant musicians is mind-blowing!

I’ve loved the Blue Orchids for years too and the guys in the band have welcomed me with open arms. They’re great, really supportive and have showed me the ropes as we’ve trundled through these recent gigs.

That’s another thing, I’ve never played gigs before either! It’s been a fabulous experience and I wouldn’t change a thing.

That is an incredible story. Thanks for telling me.

In the same way that Fliss Kitson has invigorated Nightingales, it seems Tansy is doing much the same with Blue Orchids.

Her instrument seamlessly blends in with their sound yet at the same time gives it a distinctive edge. Martin Bramah and the gang are at the top of their game in terms of songwriting and it’s lovely to see how they have welcomed a new member into their ranks. Long may they continue to bloom.

The latest album, Speed The Day is the one featuring Tansy. Reviewed here.

Interview by Ged Babey – joint copyright held by Blue Orchids and Louder Than War – one of whom must agree to reproduction elsewhere online.