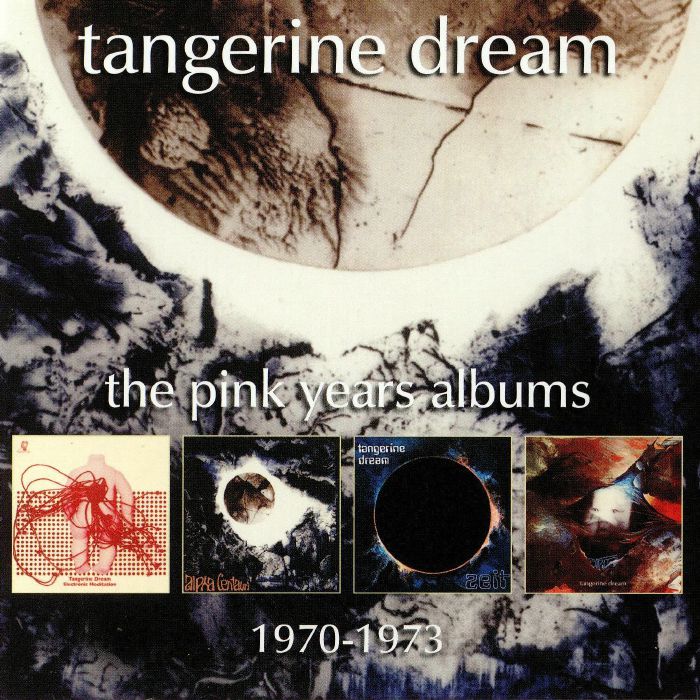 A 4 disc set of what in hindsight are bonafide groundbreaking and classic period Tangerine Dream albums.

Four from back in the formative days of the electronic music pioneers led by the household name (in some houses) Edgar Froese. They are still very much a going concern albeit in a very different form and Edgar’s widow plays her part in a non-musical capacity with the current band. A family business indeed as Jerome (son Edgar) Froese is seen peeking out from the cover of 1973’s Atem unaware that he’d play a major role in the band between 1990 and 2006.

But we travel back to the time when electronic music came not from samples and patches but from great electronic devices packed with  wires and looking like an early incarnation of a telephone exchange and involving intricate levels of knob twiddling exploration. In fact not dissimilar to what Richard Barbieri is still doing these days.

The four albums here find the Tangs just prior to them hitting their peak in the UK when the mid seventies albums were top ten achievers and well before the Ainscoe household was subjected to endless spinning of the clear vinyl of Force Majeure having discovered the band in the late seventies when they became particularly prolific.

Back to the roots though and Electronic Meditation now seems very much a period piece. A tape collage utilising the best of early seventies technology that now might seem a tad dated yet at the time, what we might now consider as primitive, was  cutting edge experimentalism. Any semblance of arrangement might be hard to identify as Genesis evolves into Journey Through  A Burning Brain with its hanging chords and a plethora of interstellar bleeps and whizz bangs. Thankful for the sounds of some indecipherable vocalisms by the times Resurrection arrives, it’s perhaps a record more suitable for a bout of zoning out as opposed to the more intellectual study tha the later work became a soundtrack for.

Alpha Centauri saw a progression into the use of mellotron and expansion into the use of organ and flute and rumbling percussion that added an extra dimension to those early days of  essentially spacey soundscapes and atmospheres. Still some element exists of British TV’s Tomorrow’s World and their sort of notion of  “this is what music of the future will sound like.”  Echo machines provide much of the atmospheres and there’s even room for the guys to credit and iron stick and coffee machine – nothing left to chance in the creation of something original and groundbreaking.

The four movements of Zeit saw the band shift into a more classical direction in terms of composition. As each section evolves quite naturally into each other, it creates the effect of a long form composition; some may have even argued that it provided the final spark for the ambient movement hinted at in the previous album.  It’s a record that provides an early clue for the band’s alter shift into film soundtracks and inspiring a movement towards ambient investigation. It’s also an interesting one that, from personal experience, could throw up an issue. Don’t put on the album and then forget you have and start thinking “where’s that noise coming from?” I thought I heard a buzzing as I was unpacking my shopping and then realised…iIt could be one of those.

Meanwhile, ever onward to the fourth and final inclusion. It’s  unthinkable to look back and see how the Atem was John Peel’s 1973 album of the year.  Possibly the recognition and seal of approval from a known name that help the band to shift gear at least in terms of wider appeal. Such was the strength of radio in the seventies and a Peel recommendation certainly in the UK, paved the  way for the more commercial successes of the subsequent work.  Apparently even Richard Branson sat up and took note of what was happening  with the sudden influx of mail orders.  A turning point and musically, the languid atmospheres still provided the core yet are decorated with more intense percussive interludes and vocal experiments.

Four album then that provided the roots for the electronic subculture to bloom and that provided the inspiration for a whole host of bands that followed in the same or slightly different direction.  The band are a different beast today, but like looking back at old photos in black and white and washed out colour, something to warm the cockles.

Watch the Tangs playing Atem on Austrian TV in 1973: