Photo of Tangerine Dream above by Michael Jones.

A few days ago in Copenhagen Tangerine Dream performed the Soundtrack from the film Sorcerer (1977) for the first time live. And if that wasn’t enough, also on the bill were Michael Rother (NEU!)  and Dieter Moebius. Louder Than War’s Emmett Mullaney was at the gig and has filed the following report.

When I saw the line up for tonight’s performance a few months ago my hands were shaking typing in the credit card number to book a flight to Denmark. Not just the legendary Tangerine Dream but Michael Rother and Dieter Moebius as well. This was too good an opportunity to pass up and if it meant flying to my favourite city in Europe to witness it then that was the price I was willing to pay.

The reason Tangerine Dream are here tonight in Copenhagen’s famous Tivoli concert hall is to perform the score of William Friedkin’s 1977 film ‘Sorcerer’ for the very first time. Friedkin is the guest of honour at CPH PIX film festival of which this event is a part and the man who gave us such great films as ‘The Exorcist’ and ‘The French Connection’ is in attendance.

First up is Dieter Mobius formerly of Harmonia and Cluster who takes to the stage at half past seven and gives us an almost industrial like set complete with booming bass lines and feedback that brings to mind Rochdale’s Autechre in places. It’s a challenging listen but he manages to pull it off in front of an audience that are still streaming in to take their seats in this fine 60 year old building. 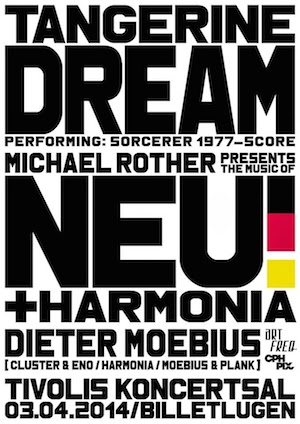 There’s a brief break in proceedings then as stuff is moved around on stage until it’s the turn of one half of the seminal Krautrock band NEU! in the shape of Michael Rother. Here he’s joined by former Kraftwerk and La Dusseldorf drummer Hans Lampe and a guitarist who settles in at the back to provide that extra Vorsprung Durch Technik to the array of electronics on the table in front of Rother. In the pre show interview downstairs Herr Rother had told a story about how he got caught up in the whole faster is better mentality when playing guitar in the 60’s and was trying emulate guitar heroes of the era such as Jimi Hendrix. Everyone was obsessed with copying American or British acts until the Germans decided that they were going to do their own thing. The British press dubbed this scene Krautrock and NEU! were one of the best groups to emerge from it.

The concert hall is soon filled with the distinctive 4/4 motorik beat as Lampe lays down a simple rhythm while Rother’s guitar screams over the electronics. It’s not long before we are treated to Hallogallo from their 1972 self titled debut album and there are heads nodding and feet tapping as far as the eye can see. As promised in the pre show interview we get Negativland written by the late Klaus Dinger, the other half of NEU! with its slow crescendo like build up. It’s a shame that we are in a seated venue as this is music that’s made for dancing to. Then follows a couple of songs involving a female guest singer but since we cannot hear one single note that she’s singing it’s a relief when we are left with the three musicians that we started with to bring the performance to its end. This is actually the second time I’ve seen Rother and he proves again that he’s a class act. Fantastic stuff.

Time then for the main event as the director of ‘Sorcerer’, William Friedkin take to stage at half past ten to introduce the hardest working band in show business. Even Wikipedia has trouble keeping up with the output of Tangerine Dream with 96 studio albums alone listed since the group was formed in 1967. Friedkin spins a yarn about how he heard of the band while in Germany promoting one of his other films, The Exorcist. He attended a gig in an abandoned church in the middle of a forest where the band performed for hours in total darkness and soon after asked them to record the soundtrack for his new movie.

With the introduction complete the band stroll onstage led by the only continuous member since their formation in the shape of Edgar Froese. He’s joined by four others taking up their positions on synths, percussion and violin while the opening bars of the main title fill the concert hall and the light show begins. Anyone expecting a short set seeing as the soundtrack is just shy of 44 minutes had their fears allayed  before the gig when the band announced that they also had 30 minutes of unreleased material to play. Arpeggiated chords boom from the stage as percussionist Iris Camaa lays down a fierce rhythm combining bongos and cymbals while Hosiko Yamane’s violin sears like a jet fighter over it. Creation and Vengeance follow and by the time we are treated to Abyss it’s not hard to imagine the storyline to ‘Sorcerer’ and the four desperadoes hired to transport a dangerous consignment of nitro glycerine through the jungles of South America and the tension that ensues. Time seems to fly by as flutes, accordions, violins, synthesizers and drums combine to great effect to bring the audience on a journey into the realm of Tangerine Dream. A quick glance around the room reveals many with their eyes closed drinking it all in. Then a full two hours later, it’s all over as Froese and Co. take a bow on stage thanking everyone for coming. It’s hard to believe that this is the first time they have ever played in Denmark but like a famous beer commercial slogan of yesteryear it was most definitely worth waiting for. Magnificent.

You can check out the film festival’s website here too.

All words by Emmett Mullaney and the photo at the head of the review by Michael Jones. More writing by Emmett on Louder Than War can be found at his author’s archive. Michael also makes music, check it out at his Bandcamp.