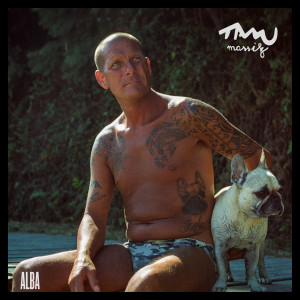 The relentlessly sobering landscapes of Bristol outfit Tamu Massif are examined by Clive K Hammond as the trio release their debut collection ‘Alba’.

Eastern Japan’s now inactive volcano Tamu Massif is submerged cavernously within the waters of the North Pacific Ocean. It’s vastness eluded many researchers until 1993, but the invisible knowledge we have on the underwater mound still makes it one of the world’s most disorientating spots. Some days Tamu Massif remained muted among the open space’s occasional waving melodies of the sea, on others it would react by sparking into life to deliver a burst of harsh, distorted noise above the swell. It’s no surprise then that Bristolian warm electronic outfit Tamu Massif’s sound resides in such territory as their debut e.p ‘Alba’ demonstrates.

Throughout the crux of Tamu’s ‘Alba’ an abiding yearning to blend crushing Oliver Sim guitar to the beat of soft analogue synthesizers – generating in the process a cooling, midnight comedown soundtrack. Such is the trio’s willingness to infuse momentary ruptures of James Blake fashioned beat manipulation that oppose the alternative pop allure of each track’s hooks, ‘Alba’ should happily hide within any morning meditation playlist. Opener ‘Jejune’ produces this union explicitly; dreamy passages of understated London Grammar electronics conform the shimmering progressions of guitar as the disorientating vocals create an array of warped harmonies across the steely 80s chorus. At times it reflects ‘A Different Kind of Fix’ era Bombay Bicycle Club within the its backing choir that compliments the intensifying nature of the track.

‘St. Isidore’ – a product of the shifting analogue synth below, the hesitant grooves construct a contorted, halcyon skeleton that clicks against the crisp sampling – retains ‘Alba’s diminished elegance. The crumbling ‘Delphine’ cements it.

‘Alba’s standout contribution is ‘A Fate Much Worse’ – a true experiment in electronic pop. The sanctioned melancholy that imbues within the track’s narrative is maddeningly delivered by their frontman. In parts his light phrases delivering ‘said I’ve already suffered, I feel much worse in here, now my faith it was forged in these fires, send my love to those kids’ are remedied by fierce impromptu twists against the hypnotic picked melody of the guitar. The ambiance by the end becomes towering; the clean guitar now besotted with the naked grooves that conduct the remainder of the crestfallen energy evolving throughout.

Such is the seduction of the name they create their sound under, Tamu Massif have crafted something that resonates with as much beauty as intrigue. It could be a fragmenting experience. An empowering experience. Or something of utter desolation dependent on mood. Regardless, at 16 minutes long it’s the perfect drug against any daily trauma.

For more information on Tamu Massif you can find them on Facebook and they tweet as: @tmassif.