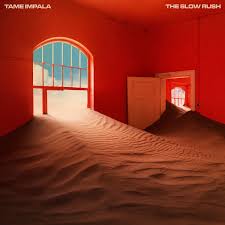 I don’t normally use the word ‘genius’ about many people, however the cap fits with Kevin Parker. Having been a massive fan since Innerspeaker I’ve seen this guy grow in production stature like a magic beanstalk. The songwriting speaks for itself. Pulling from many genres he’s done it again. but this is Tame Impala in it’s own right. A funk psych fuelled wonder that hits the spot.

I’d review this myself, however after reading this amazing, spot-on review by friend and fan Tommy Overington, (singer with The Rising)  I couldn’t top it. He’s kindly let me publish this. I defy you to find a better review….

So after a week of snatch listening (never a good way to really listen to and appreciate an album) and then giving it one full uninterrupted listen on the turn table and then 3 full listens in the car back to back driving to London yesterday I can quite honestly say the 5 years which have elapsed since “Currents” have been undeniably – worth it.

This album is nothing short of perfection. From the order of the track listing (very important when compiling an album – I’ve lost sleep personally about sorting my own out and making sure it flows) to the instrumentation and clever increments throughout. There is always a new sound or inclusion which pricks your ears up.

Arrangement wise – it’s stunning. The songs move around so much and never tread water. No section is the same. The thing I love about Parker is that he’s never content to rest on his laurels. He is simply not satisfied to stand still. He seems to want to constantly evolve musically and experiment with different genres and styles.

When I discovered “Innerspeaker” and “Lonerism”, like many, I anticipated “Currents” to be more of the same – modern psych, heavily influenced by the 60’s, shed loads of effect laden guitars and spacey, deep reverberated John Lennon falsetto vocals (see Lennon’s “One Day (At A Time)” for a perfect reference track) – but I think we were all thrown out by what we heard – a very 80’s sounding synth pop record – albeit with Kevin Parker’s now unmistakable delightful, trademark, falsetto Lennon vocal the only thing remaining. It took me a fair few months to really – A. Get used to it. B. Like it – and then C. Herald it as a masterpiece.

No such problem with “The Slow Rush”. We were teased with singles such as the effortlessly melodic soundtrack to summer (well, mine anyway) of “Borderline”, the Supertramp influenced “It Might Be Time” and the emotive, tear inducing “Posthumous Forgiveness” where Parker sings / gets off his chest his feelings of his recently deceased father. A beautiful bitter sweet ballad which leaves you feeling his pain and then his relief in his reconciliation / closure.

The lyrics in all of the songs – like all Tame Impala albums centre around a concept – Time being the subject matter of this particular LP. “It might be time to face it” and “You ain’t as young as you used to be” providing evidence of this along with the song titles “One More Year”, “Instant Destiny”, “Tomorrow’s Dust”, “Lost In Yesterday”, “It Might Be Time” and “One More Hour”. The songs seem to have a reflective nostalgic mood – but also – and more importantly – come with a defiant battle cry to embrace the now.

From the moment opener “One More Year” drops – the mood is set. An infectious tremolo effect throughout paves the way for the rest of the album tracks to merge into each other. “Breathe Deeper” sees Parker delve into hip hop beats and funk. The piano run reminds me of the synths on “The Message” by Grand Master Flash And The Furious Five and the short 90’s inspired dance floor filler “Glimmer” has a “Born Slippy” / Modjo (Lady) feel to it with a distorted Parker vocal pleading “I just want a glimmer of hope” (at least I think that’s what he’s saying) whilst album closer “One More Hour” again reveals Parker’s Supertramp progressive / soft rock influence via the keys.

My personal highlight is the stunning, chilled out “Tomorrows Dust” with its Latino acoustic arpeggio guitar teleporting you to a tranquil, peaceful paradise beach and Parker’s beautiful vocals helping you watch the sun go down. Running a close second is “Is It True” with its catchy, funky melody and conga drums with a groovy Daft Punk kind of vibe. It’s insanely – and annoyingly- perfect.

You’d be forgiven for thinking after listening to this Tame Impala album that it was the work of several top musicians and producers – but no. Everything is Parker. Do I prefer this album to “Innerspeaker” or “Lonerism”? The answer is probably no – not yet anyway – but it’s a welcome breath of fresh air and gives us another insight into Kevin Parker’s incredible mind. Buy this album. There won’t be a better one all year.

Brought to you by Wayne Carey who writes for Louder Than War. His author profile is here.