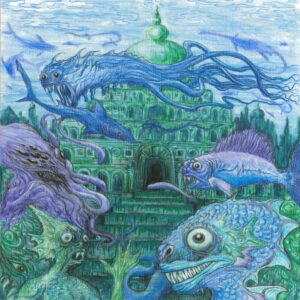 For the lovers of the darkest depths of psychedelia, Taman Shud release their second album Oracle War. It is the sound of almost-sleep, the first nightmarish moments in the unconscious world. The tracks are filled with symbolism and magic; visions of monsters praying in the deep ocean where light is wholly absent.

Taman Shud’s first album Viper Smoke began the prophesy: Oracle War continues it. It is being released to coincide with their performance at Liverpool International Festival of Psychedelia where it will be available before the official release date.

Taman Shud interestingly describe Oracle War as the result of saline-soaked séances with creatures of the deep. If so, it pays suitable homage to the watery priesthhood it is meant to applaud. Known for their tongue-in-cheek occult references, its true origin might be harder to pin down.

The title track, Oracle War, has a fast, driving rhythm and sinister vocals. The pace is frantic and exciting. The keyboards are perfect and the overall pounding musical bombardment is stupendously good.

Nine Knots is short and ritualistic, the chanted content has an almost Soviet feel; a dirge for the lovers of modern occult.

The baleful, soaring vocals echo over some very fine, brooding rock in Trench Arcana. Anarchic slithering guitars lead the listener through the track, which has slight echoes of space rock.

Slime Liturgy could be part of the soundtrack for a demented Sci Fi horror from the 1960s. If some Taman Shud tracks sound like unholy rituals, then Slime Liturgy must be the aftermath. It is as if the summoned has taken over on vocals; growling and fiendishly fine.

Ceremonial and drum-heavy, God Repeater has an interesting rhythmic quality like music from another dimension. As the vocals become more chaotic and pained, the music pushes towards a feverish apex.

Aquatic Malign has a slow, deliberate beauty. When the pleading, tortured vocals kick in they are suitably unsettling. The  guitars, keyboards and anguished screams add to the ominous atmosphere.

The see-saw guitars of Caanan’s Jewels lead to growling, indecipherable mutterings before the full onslaught begins. The vocals soon become a sacramental chant. Eventually, the music descends into musical fragmentation. Only the rhythm of the see-saw guitar breaks the thick pool of sound.

More feedback-guitars and general mayhem characterise Cerulean Exequy. Long and solemn, the track is unfocused and experimental, like fragments of watery soliloquies.

All in all, Oracle War is another triumph for the noise rock trio. If the information gained from séances with the creatures of the deep lead to such fine and fiendish music, then count me in.

More information on Taman Shud can be found at: